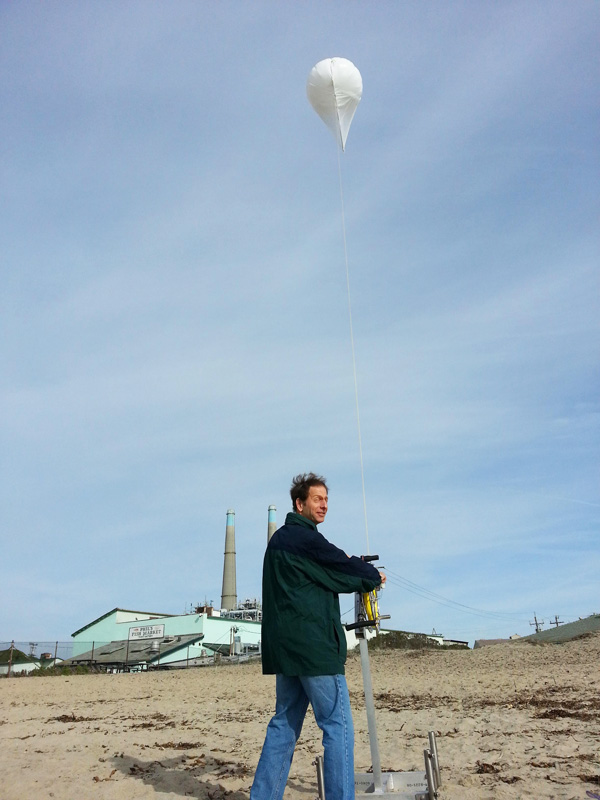 Brent Roman conducts the first Helikite test flight on the beach just outside of MBARI in Moss Landing, California. The Helikite is filled with helium to generate lift.

When MBARI researchers deployed an environmental sample processor (ESP) from a ship to collect and analyze water samples about 100 miles off the coast of Hawaii a few years ago, communications between the ship and ESP were very weak. Satellite phone communications were spotty and the direct radio link from the ship was reliable only when the ESP was within 400 meters. The ESP team spent precious time chasing the instrument in order to communicate with it.

Satellite phones, cellular phones, and direct radio links each present their challenges in this scenario, so Brent Roman, a software engineer at MBARI, thought “if only we could combine a kite with a balloon, we could keep a radio relay above the ship in any wind.” Brent began to build a device called Helikite that could act as a very low satellite tethered to a boat and communicate via radio to reach instruments five to 10 miles away. This extra range will allow ships to monitor multiple instruments without having to trail them. Brent recently tested the Helikite, without a radio, for its first flight onshore. It was a successful test—the Helikite flew for about an hour and reached up to 350 feet. The next shore-based test will include the first radio payload.