During the 2012 GOC expedition, researchers used the AUV to map the axis of the Alarcón Rise from the Pescadero to Tamayo transform faults at each end, and the ROV to explore and sample features identified in the maps. They discovered two active hydrothermal vent fields, enormous and relatively recent lava flows, abundant faulting, and an unusual, rugged volcanic dome. This dome is made of rhyolite, which is a lava type that had not been found on the seafloor previously but is common in volcanoes on land, particularly explosive arc volcanoes. Why it has formed on a spreading ridge where basalts are usually erupted, and whether similar eruptions might pose hazards by being so close to populated coastline, are among the questions the researchers will address during this dive series. 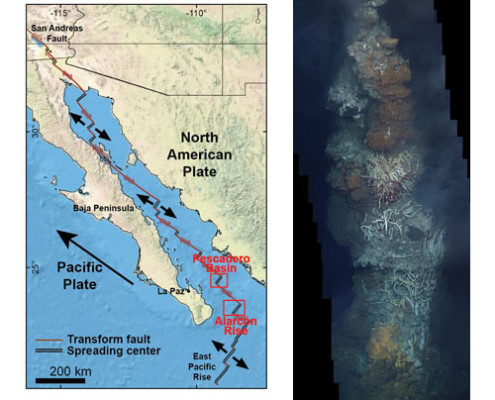 (left) Tectonic map of the Gulf of California showing the locations of Alarcón Rise, Pescadero Basin, and La Paz, Mexico. The northwestward movement of the Pacific Plate, on which the Baja Peninsula rides, relative to the North American Plate is responsible for the spreading of the East Pacific Rise mid-ocean ridge system, the Alarcón Rise, and the smaller spreading centers up in the gulf, and also for the strike-slip motion in the transform faults between spreading centers and eventually of the San Andreas Fault, which begins at the NW end of the gulf.
(right) Hydrothermal chimney in the Ja Sít vent field discovered on the Alarcón Rise in 2012. This image mosaic from ROV Doc Ricketts video shows the upper half of a 13-meter tall black smoker, and the colorful community of chemosynthetic bacteria, tube worms, crabs and fish supported by the >300º C, mineral-rich vent fluids.

ROV dives are planned on the rhyolite dome and other sites along the Alarcón Rise, at a nearby volcanic seamount with a large caldera, and in the Pescadero Basin to the east of La Paz, which formed by seafloor spreading but has never been explored. Lavas and hydrothermal fluids will be sampled for chemical analysis and sediments will be cored to analyze the deposits and to date the underlying flows.

This work will enable the researchers to learn how big the eruptions are and how often they occur, and to make a geologic map of the ridge, like is done routinely on land. These investigations will contribute to our general understanding of the mid-ocean spreading system in the Earth’s crust, and are especially important here because this area, close to shore yet not easily accessible and hidden in the deep sea, is geologically very active.

August 18, 2015
This has been a great cruise with almost all of our initial goals met and some new discoveries added on top. As Rob Zierenberg noted yesterday, numbers sometimes tell a story and here are some more from this cruise. We collected 191 lava samples, 14 samples of hydrothermal deposits, 3 mudstone samples, 82 short (30 centimeters) push cores...

August 18, 2015
The number for today seems to be 33—the current wind speed in knots. Waves are pounding into the ship and we cannot launch the ROV in this weather. Everyone was really looking forward to today’s dive, which was in Pescadero Basin, the next spreading segment north of the Alarcón Rise.

August 18, 2015
As previously mentioned, the Alarcón Rise is the northernmost segment of the East Pacific Rise spreading center. The Alarcón Rise is roughly 50 kilometers long. It is the axis along which new ocean crust is forming as a rocky ridge, compared to the short spreading segments within the Gulf of California that are sediment-filled basins.

August 18, 2015
Today was like traveling back in time! Our goal was to establish an approximate eruptive history at this location, so we started our dive about three kilometers to the west of the active Alarcón Rise axis.

August 18, 2015
Today's dive was, as the Wisconsinites on board (Julie Bowles, Knute Brekke, and Patrick Mitts) would say, a smorgasbord! There were new and very impressive hydrothermal chimneys, mounds of lovely elongate basaltic pillows, and a vast flood of a relatively young, jumbled sheet-like lava flow, which will be discussed in tomorrow’s cruise log.

August 18, 2015
Today’s dive targeted the southernmost end of the Alarcón Rise, where it transitions from oceanic spreading center to what is called a transform fault.

August 18, 2015
Today's dive on the Alarcón Rise started in a newly discovered active hydrothermal field, a vent through which hot fluids emerge from the seafloor. The tall chimney edifices, along with their peculiar deep-sea inhabitants, and their jetting hot fluids, literally gave us a "very warm" welcome.

August 18, 2015
A primary goal of today's dive was to explore the extent of high-silica lava flows at Alarcón Rise. These flows are common on land volcanoes but rare at oceanic spreading centers—sites where two tectonic plates move away from one another.

August 18, 2015
The purpose of our expedition today was to determine if volcanic rocks containing silica occurred along the spreading ridge south of the previously identified rhyolitic lava dome.

August 18, 2015
Today we dove on the Alarcón Rise mid-ocean ridge. With few exceptions, mid-ocean ridges typically lie very deep beneath the sea surface. They are a locus of active volcanoes, hydrothermal vents and chimneys, and an abundance of life.

August 18, 2015
The R/V Western Flyer departed last evening from Pichilingue Harbor near La Paz, Mexico. The weather was clear and warm and the sea was smooth as glass. We steamed through the night and arrived in time to do a full day's ROV dive on the eastern-most volcano of the Alarcón Seamounts.