Aaron Micallef writes: Offshore faults are important sources of earthquakes and associated tsunamis. To investigate the occurrence of offshore faults, marine geologists look for two kinds of evidence. The first is topographic, such as a linear escarpment (an elongated change in slope gradient) or abrupt changes in the form and orientation of seafloor landforms (e.g., canyons, channels). The second is stratigraphic, whereby seismic reflection profiles (like an X-ray image of the sub-seafloor) are used to identify a break or jump in otherwise parallel sedimentary areas of the seafloor.

Deriving information on fault activity from seafloor data can be difficult. Bathymetric maps compiled using standard multibeam echo sounder systems are not always of high enough resolution to identify minor changes in seafloor topography. Even if a fault can be identified, accurate and high-density seafloor sampling is required to determine the age of the fault. This type of sampling is not easily done using standard seafloor sampling methods such as gravity coring.

This team of scientists is employing a number of state-of-the-art instruments to characterize offshore fault activity in unprecedented detail. AUV (autonomous underwater vehicle) surveys were first carried out at a number of sites offshore of Southern California and northwest Mexico. The AUV surveys acquired high-resolution bathymetric maps (identifying details as small as one meter in size) and seismic reflection profiles, which allowed the scientists to identify a number of areas most likely to host topographic evidence of offshore faults.

Now, we are using the AUV bathymetric maps to guide the ROV dives. We use the ROV Doc Ricketts (with a depth rating of 4,000 meters) to obtain push cores (about 30 centimeters long) and vibracores (up to two meters long) to sample sediments in the vicinity of the faults. 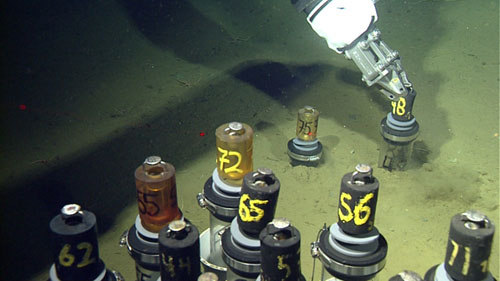 The ROV manipulator arm inserts a push core into the deep-sea sediment. 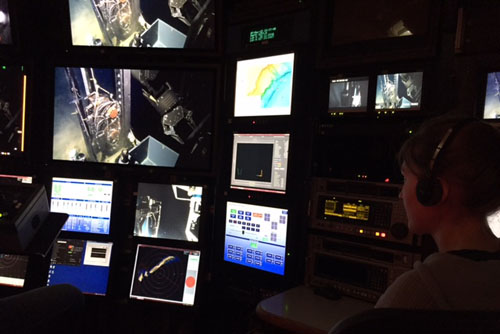 Lauren Shumaker watches as the ROV pilot uses the manipulator arm to open the drawer on the ROV sled. The vibracorer is mounted on the front of the vehicle, which you can see on the main monitor.

There is another interesting aspect related to offshore faults that we are investigating. Many researchers in the past have proposed that offshore faults can act as either conduits or traps for sub-seafloor fluids (e.g. water, methane) trying to reach the seafloor. To test this hypothesis, the scientists are also taking closely-spaced samples of pore water from the vibracore sediments using syringes. The chemical composition of the pore water is being analyzed in the laboratory onboard the research vessel. Once the chemical composition is determined, the results will be spatially mapped and correlated with offshore faults to help us better understand seismic activity in this region. 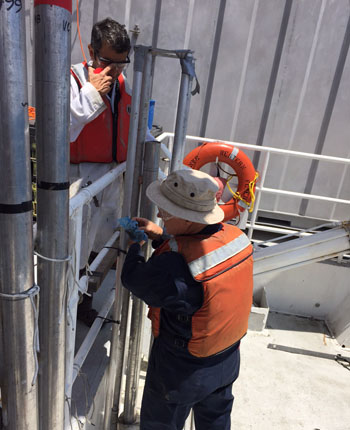 Aaron Micallef and Brian Edwards process the vibracores on the back deck, cutting off the excess tube so they can then insert the syringes to extract the water within the sediment (pore water). 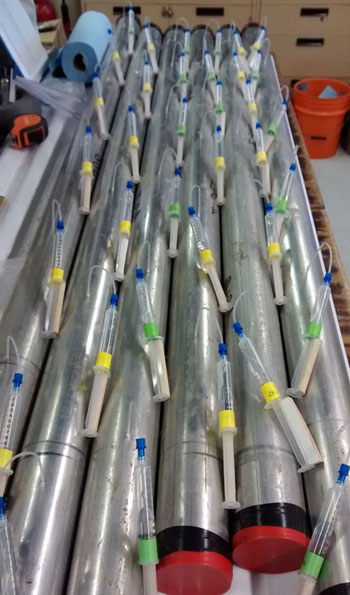 Syringes are inserted into the core tube to extract the pore water for chemical analysis later in the lab.