On this expedition we are exploring the offshore extensions of tectonic faults that cross the northern Baja California peninsula or run offshore parallel to the Baja peninsula and coastline of Southern California. These faults are believed to be part of a system of faults that extends northward, crossing the U.S.-Mexico border west of Tijuana and continuing offshore past Los Angeles. While less important than the San Andreas Fault, they accommodate some of the plate motion between the North American and Pacific plates. Geologic evidence shows that they have been active in recent times onshore, but the history of recent moments (measurements of earthquake size) on these faults is limited. One of the goals of this expedition is to assess the timing of the latest events on these faults, which is critical to understanding the seismic and tsunamic hazards these faults pose to the adjacent coastal areas extending from Ensenada to Los Angeles. 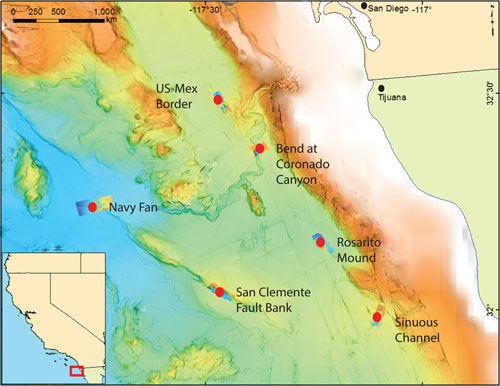 This map shows the sites off northern Baja that we plan to explore and sample on this expedition.

Today we set sail from San Diego Bay southwest to Coronado Canyon. The ROV Doc Ricketts descended to the dive site at about 1,300 meters, then we spent the day sampling sediment from both sides of the fault, which cuts through a deep bend in the canyon. This site, along with the others that we will sample on this expedition, was mapped using an autonomous underwater vehicle (AUV) over the last few months from the R/V Rachel Carson. These high-resolution maps allowed Chief Scientist Charlie Paull to determine where to sample using the ROV. 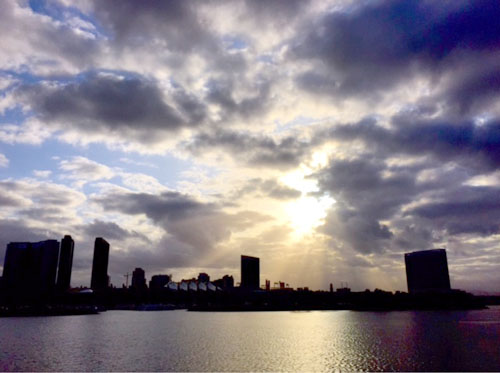 Much like the Grand Canyon, this deep-sea canyon has visible layers, allowing us to use push cores to sample the layers from the bottom of the canyon wall to the top by inserting the cores horizontally into different sediment layers. The ROV pilot uses the manipulator arm to grab the core tube and insert it into the sediment. The core is pulled out of the sediment and placed back in the tray of the ROV. Using the ROV to take these precise samples throughout the layers is much less expensive than vertically inserting a large borehole through hundreds of meters of sediment, which can cost millions of dollars. 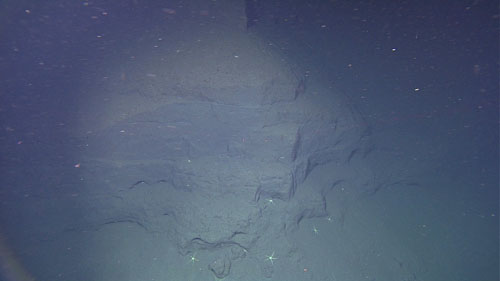 You can see the layers of sediment within the wall in this section of the canyon.

Today we collected 24 push cores, each one processed after the ROV was recovered in the evening. The cores that were horizontally inserted into different layers of the canyon will be sifted and the foraminifera (or forams, for short)—tiny, single-cell organisms that are very abundant in sediment—will be sorted. The forams can be dated to as long as 50,000 years ago using radiocarbon analyses. Comparing the age of the forams in the samples from the canyon layers and from each side of the fault will help the team estimate when the fault slip occurred. It will also help explain the processes that are modifying the seafloor in these fault zones. Hopefully, the samples collected in these 10 days will give insight into the fault system, and perhaps help scientists to make predictions about seismic activity in this region. 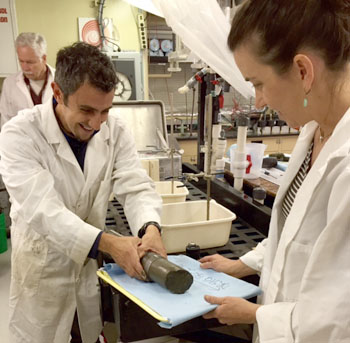 Aaron Micallef extrudes the sediment from a push core while Eve Lundsten holds a tray on which she will split the core in half and photograph it. 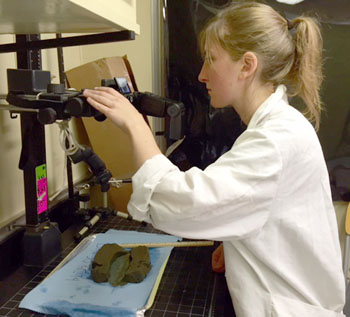 Lauren Shumaker takes a photo of a core that has been split in half. The sediment will then be bagged and refrigerated until it can be analyzed by Mary McGann at the U.S. Geological Survey.