A glimpse into a mysterious, oxygen-limited world

A glimpse into a mysterious, oxygen-limited world

As a Ph.D. student in biological oceanography at the Scripps Institution of Oceanography at the University of California, San Diego, I was thrilled to be invited by chief scientist Jim Barry to take part in the MBARI Gulf of California 2015 Expedition. For my thesis, I am working with Lisa Levin at Scripps, studying how oxygen minimum zones (areas in the ocean that have very low oxygen concentrations due to a combination of physical and biological factors) influence the communities of fish that live on the seafloor or interact with the seafloor.

The Gulf of California is very interesting for this type of research both because it is currently very data-limited and because the oxygen minimum zones differ strongly between the northern and southern parts of the Gulf, making it a perfect system to look at how oxygen limitation influences the benthic (seafloor) communities. 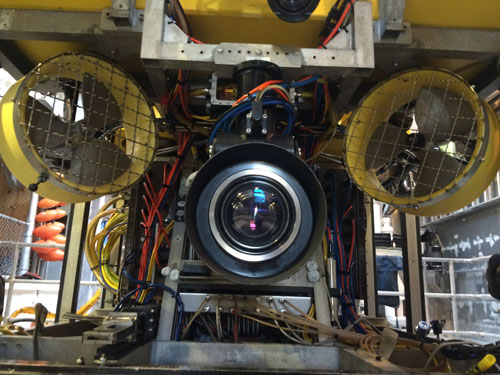 The ROV Doc Ricketts camera offers a close-up look at what lives in one of the world’s most oxygen-limited environments.

I usually conduct my research using an “otter trawl” to collect fish, so it was a special treat to learn about how Jim Barry and his colleagues at MBARI use the ROV Doc Ricketts to answer similar questions. Although trawls capture and recover animals from the benthic community, which aids with identification, they also have a number of disadvantages, including the mortality associated with trawl sampling and the inability to observe how the community members interact with each other in an undisturbed state.

Using the impressive camera capabilities of the ROV, we were able to conduct special fish transects that had a larger field of view than Jim’s typical benthic transects. This gave us a glimpse into the mysterious, oxygen-limited world of the unique deep-sea fish communities in the Gulf of California. 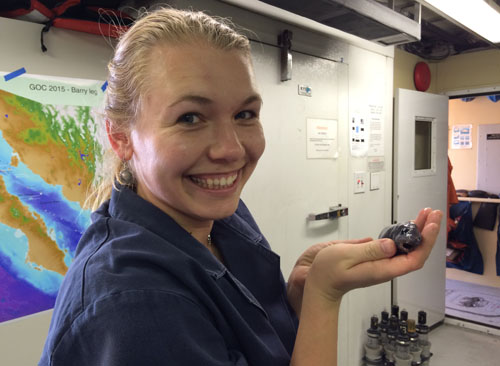 Natalya Gallo holding a small lollipop shark that was captured off of Isla Tortuga.

I could hardly believe my eyes when we observed ophidiids (cusk eels), grenadiers, and lollipop sharks actively swimming around in areas where the oxygen concentration was less than one percent of typical surface oxygen conditions. Fish are known to be extremely sensitive to low-oxygen conditions because swimming is a metabolically costly activity, but our ROV transects showed that certain highly-adapted fish can survive in some of the most extreme oxygen-limiting conditions in the world. 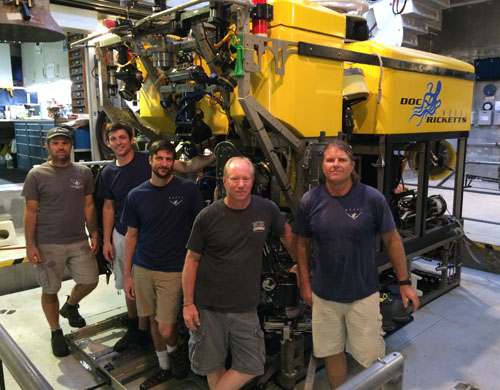 A big thank you to the ROV pilots who worked long hours everyday to make sure that all the scientific objectives got accomplished! From left, Mark Talkovic, Ben Erwin, Bryan Touryan-Schaefer, Knute Brekke, and Randy Prickett.

Thanks to the skill and patience of the ROV pilots, we were able to capture 31 fish specimens during the cruise. These will be used to identify the fish species in each community and to look more closely at their morphology. For example, all of the fish captured living in very low oxygen conditions had large, vibrant red gills—an important adaptation for gas exchange in an environment with very limited oxygen.

However, we’re still unsure of how these specialists are able to survive under such extreme low-oxygen conditions, and their unique adaptations remain a mystery. In-situ metabolic measurements of the batfish and lollipop sharks we made using the Benthic Respiration System will hopefully provide more information about how these fish are able to breathe in such oxygen-limited areas. 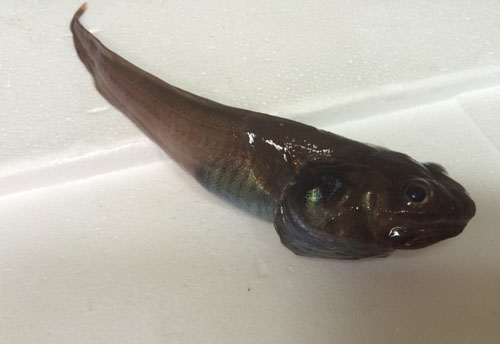 One of the deep-sea cusk eels that the ROV pilots recovered from the core of the oxygen minimum zone in Cerralvo Trough.

Representative specimens of two species of batfish that we observed off Cabo Pulmo.

In the future, the video fish transects we performed using the ROV will be analyzed in the MBARI video lab and important ecological parameters such as abundance, composition, and biodiversity will be determined for the fish communities. The ROV Doc Ricketts has sensors that measure temperature, oxygen concentration, salinity, depth, and light transmission through the water, and data from these sensors will help us understand how environmental conditions influence the presence and absence of certain species and groups of fish.

One of Jim Barry’s goals of the cruise was to use the natural gradients in oxygen and temperature found in the Gulf to study how benthic communities may look in a future warmer and more oxygen-poor ocean, as predicted under climate change scenarios. Although as a scientist it’s fascinating to marvel at ophidiids, adorable batfish, and lollipop sharks living, seemingly comfortably, in such an extreme environment, it’s also important to recognize that because of these extreme conditions, large swaths of seafloor are only occupied by these few highly adapted species, none of which you would want to order for dinner.