Diving in the canyon off Cabo Pulmo

We are off Cabo Pulmo, a Mexican national park with the most northerly tropical coral reef in the world. Cabo Pulmo was originally colonized by pearl divers. “Pulmo” refers to the breath-holding by the divers—pulmo is a Latin root for lung. Pearl divers were replaced with fishermen, who fished the reef and local area heavily. In 1995, however, these same fishermen changed their views of the area and decided to give up their nets to protect Cabo Pulmo, leading to the creation of the park. Now these families make a living from ecotourism, guiding people interested in exploring the beauty of the tropical reef. David Castro, a dive master at a leading local dive shop, is a third-generation resident of the area, whose grandfather was a pearl diver at Cabo Pulmo many years ago. Now the park is teeming with fish. It is often cited as an example of how the creation of a marine reserve can lead to the recovery of local fish populations. 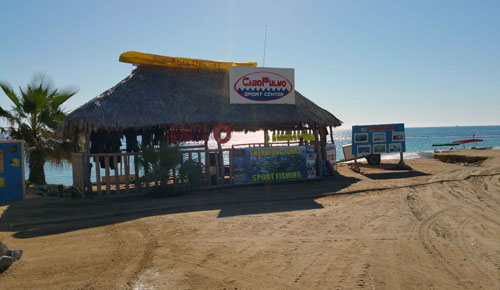 Downtown Cabo Pulmo. The village has a number of small dive / snorkel shops.

We worked with the Castro family and researchers from the Center for Biodiversity and Conservation in La Paz to produce a detailed map of the submarine canyon at Cabo Pulmo when the R/V Rachel Carson was visiting two weeks ago. Many visitors from the local community were brought out to the ship on pangas, open boats typically used for diving at the reef.

The beach is the boat ramp at Cabo Pulmo.

Today we are using ROV Doc Ricketts to dive deeper in the canyon off Cabo Pulmo, to explore the benthic communities of fishes and invertebrates living offshore. Diving first to a depth near 1,300 meters, the ROV was beneath the core of the oxygen minimum zone. There we found fairly high numbers of many species. As the ROV ascended slowly up the muddy slope of the canyon, oxygen values dropped to very near zero (less than one percent of the oxygen levels at the surface).  Most animals cannot tolerate such low oxygen levels, but some groups, including various invertebrates, snailfish, and catsharks, appear well adapted to tolerate these conditions. How can they live?  Several adaptations can help, such as reduced activity levels, low rates of metabolism, or more efficient respiration systems. 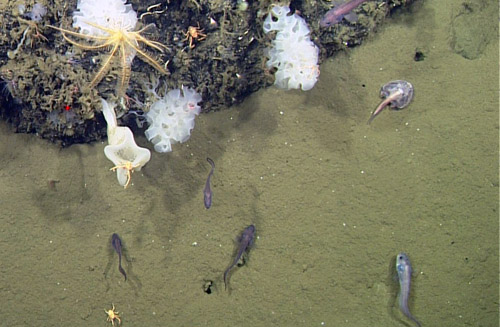 Sponges, squat lobsters, batfish, grenadiers, and codlings are common in this image from approximately 650 meters in the oxygen minimum zone off Cabo Pulmo.

Even though the shallow tropical reef is spectacular, the hidden undersea world deep in the Sea of Cortez has its own treasures.