Murky conditions in the Salsipuedes Basin

ROV dives in the Salsipuedes Basin can be rewarding, yet challenging–no real surprise since Salsipuedes translates to “escape if you can”. The channel is known for its very strong tidal currents, due to the shape of the Gulf. Unimodal seiches commonly occur in the Gulf—it sounds technical, but just about any kid who has taken a bath has created one in the bathtub by sloshing the water back and forth… a unimodal seiche.

In the most northern part of the Gulf, tidal height can exceed 7.5 meters at high tide and much of that water drains through the western channels during low ebb, funneling rapidly through the Salsipuedes Channel. We attempted a dive here on March 23, but had to abort the dive due to the very strong currents and murky waters. 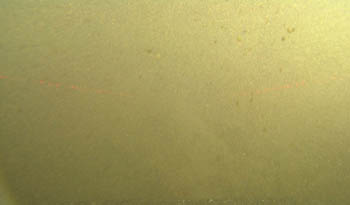 Murky waters at 1,000 meters depth in the Salsipuedes Channel. It was hard to see anything.

We retreated south to Isla San Pedro Martir, only 56 kilometers (35 miles) away, but largely protected from the rapid currents. We vowed to return in a couple of days to try again. Isla San Pedro Martir looks like a sleeping iguana to many of us. Can you see the resting lizard in the photo? 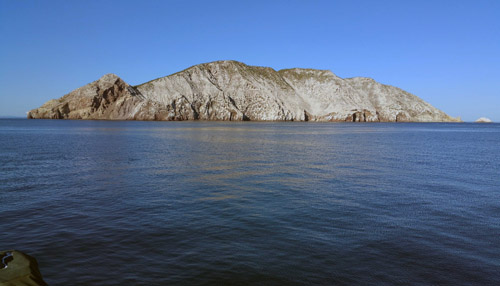 Conditions were still murky, but workable at this island. We started the dive at 900 meters depth, and steadily worked our way closer to the island, ending the dive at 200 meters depth. We observed lots of life, even in the murk.

As promised, we departed from San Pedro Martir and steamed back to the north, to attempt a second dive in the basin. Why the persistence? The oxygen, temperature, and other characteristics of the deep waters in this basin differ from everywhere in the north Pacific Ocean. Normally, deep waters would have very little oxygen, and would be fairly cold. Here deep waters are warm (11 degrees Celsius) and oxygenated (40 micromolar) compared to cold waters nearly devoid of oxygen less than 161 kilometers (100 miles) away.

Today we dove in the Salsipuedes Channel, just across from Bahia Los Angeles, and conditions were great. The water was clear and currents were slow. We saw lots of life, including rockfish in far deeper waters than found farther south or in California, beautiful deep-sea corals and sponges, and fairly abundant fishes. One particularly lovely animal is a squat lobster with long legs that lives on deep corals. Weather is currently holding steady with light winds and clear skies. Everyone seems happy. 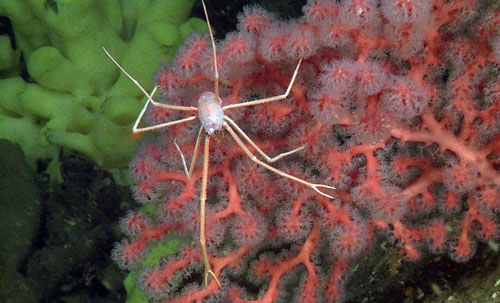