We are now even closer to La Paz and are heading down to 1,600 meters with the ROV for one last look in the deep waters of the Gulf of California. The divers have dried their gear and packed it away as there will be no blue-water dive today due to time constraints. During this leg, our six divers collected a diverse assemblage of ctenophores, siphonophores, hydromedusae, salps, pteropods, amphipods, copepods, polychaetes, arrow worms, and larvae. These specimens provided an important source of experimental replicates for the scientists on board. 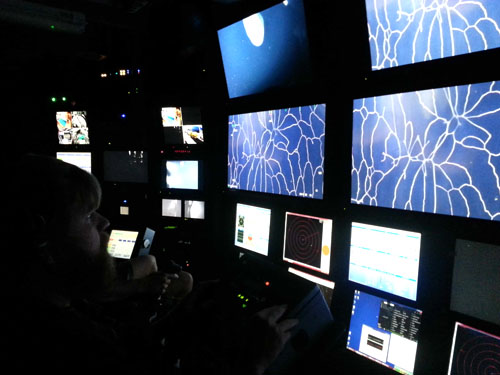 Casey Dunn observed the large and ethereal Deepstaria from the control room on the Western Flyer. 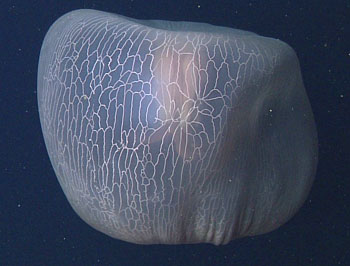 The bell of this medusa can grow up to 60 centimeters (more than half a meter) across.

Among the highlights from this cruise were: 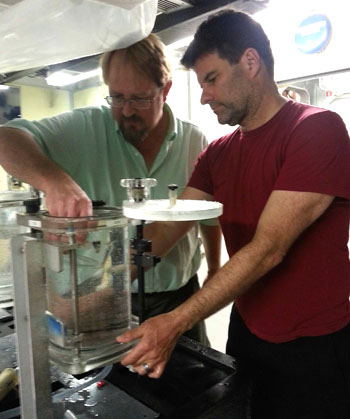 Erik Thuesen and Steve Haddock unloaded the D-samplers aboard the Western Flyer. 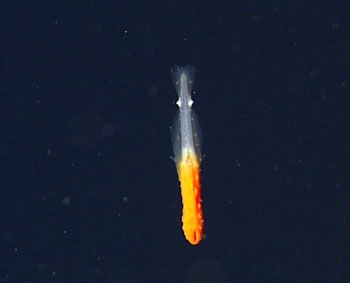 The remarkable chaetognath worm, Archeterokrohnia docrickettsae, was described by Erik Thuesen and Steve Haddock from a single specimen found on our last trip to the Gulf in 2012 and was named in honor of the ROV Doc Ricketts. This time we saw at least half a dozen of them living just off the bottom at the deepest sites we surveyed, and we were able to give a sample to our Mexican collaborators for their collections.

It is a testament to the excellent crew of the ship and ROV pilots that we were able to conduct a full set of dive days for both ROV and SCUBA operations, with no major weather issues and only one dive where the ROV had to be pulled early due to a hydraulic issue. TheDoc Ricketts is outfitted with 12 suction samplers and 12 D-samplers for midwater work, and we came up with a full load of samples almost every dive. 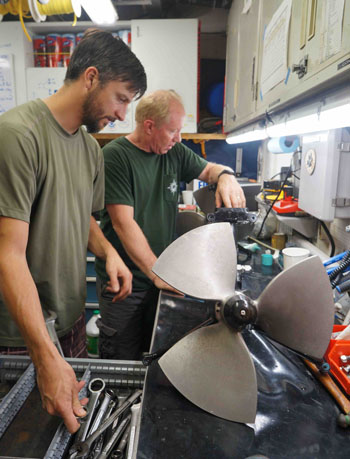 Bryan Touryan-Schaeffer and Knute Brekke made a little tweak to one of the ROV thrusters. The pilots have a workshop on board and are incredibly quick and capable at fixing problems with the vehicle. 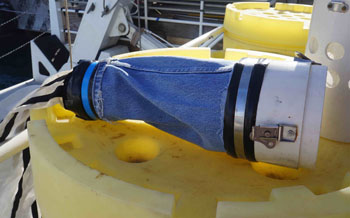 I was really impressed with how creative the researchers could be when they were missing resources or encountered faulty equipment at sea. On this trip, Casey and Cat made dry ice using an extra carbon dioxide fire extinguisher. Erik made an adapter for the trawl net using a denim pant leg cut from George’s blue jeans!

While we are accustomed to the layers in Monterey Bay (shallow waters where photosynthesis occurs and midwater zone with its oxygen minimum layer), in the Gulf of California, these transition zones are compressed into much shorter vertical scales, and they occur at much shallower depths. The set of species that can tolerate these extremes also seem to be limited, because in the Gulf we tend to see lots of a particular species at a time. Which subset we see changes day-by-day and depth-by-depth.

When reviewing the records from our 2003 and 2012 expeditions, we found nearly all of the same species were noted, but species that were dominant in one year would be rare or even absent in others. George never did see the thick layers of giant larvaceans he was hoping to revisit. While blue-water divers were stung mercilessly by Rhizophysa in past years (it is a relative of the Portuguese Man o’ War), on this expedition the tiny specimen that Cat sampled on March 11 turned out to be the only one we saw. However, we did find three strange floating clusters down near the bottom that turned out to be Rhizophysa egg masses! 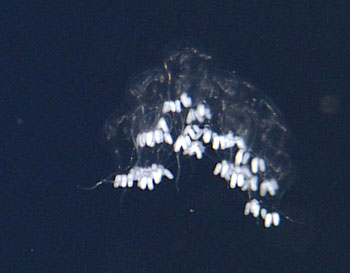 Egg mass of Rhysophysa at a depth of 995 meters. 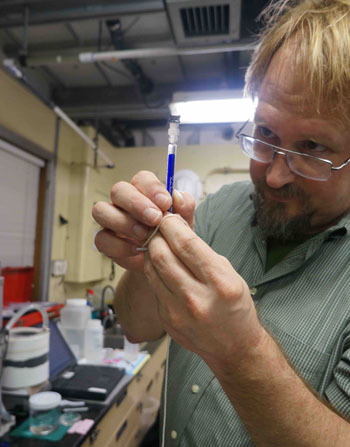 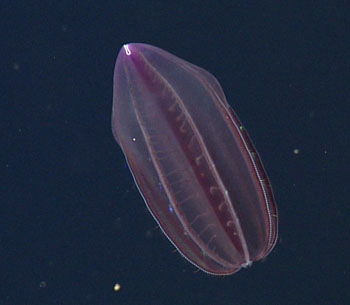 Erik Theusen has custom-designed an onboard respiration system for measuring the metabolism of small deep-sea animals like this beautiful ctenophore Beroe abyssicola. It is fortunate that the oxygen electrodes worked so well, considering the hefty tariff he had to pay on them when he first arrived at the airport. His research examines how animals adapt physiologically to life in these stratified, low-oxygen environments.

How much of this variation is seasonality, and how much is indicating a change on longer time scales? Answering these temporal questions would require additional visits to the Gulf. Unfortunately, given the logistical and bureaucratic roadblocks, we may not have such an opportunity in the future. On the bright side, we do have sufficient data to publish a thorough review of the diversity and ecological interactions of the Gulf’s typical inhabitants. Like the premise of many movies, the Gulf has an intriguing cast of quirky characters who have adapted to thrive in a challenging and fascinating environment.