Bill Browne writes: I am investigating the genetic patterns underlying animal diversity. To me, the two most interesting groups of midwater animals in the Gulf of California are the hyperiid amphipods (bug-like crustaceans) and ctenophores (comb jellies).

Why hyperiids?
Many midwater organisms have unusual eyes. Hyperiid amphipods have a particularly impressive range of diverse eye types, with a minimum of ten different eye configurations, from minuscule eyes in some species that eke out a living in perpetual darkness, to quite dramatic eyes in others that experience at least some sunlight. 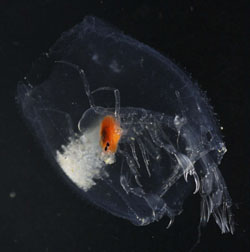 The midwater amphipod Phronima sedentaria has large eyes. It carves out a “home” within a dead salp or pyrosome. The opaque white spots on the left are eggs this animal has laid around the sides of its home. Photo by Bill Browne.

The wide diversity of amphipod eye types is thought to be related to their associations with gelatinous hosts. As our colleague Rebeca Gasca has found, nearly all hyperiids have some relationship with other gelatinous midwater organisms (often parasitic). In many cases, it is difficult to observe these associations using trawled specimens because either the amphipod is knocked off of its host, or the fragile host is destroyed. Diving with the ROV Doc Ricketts gives us better insight into these relationships. 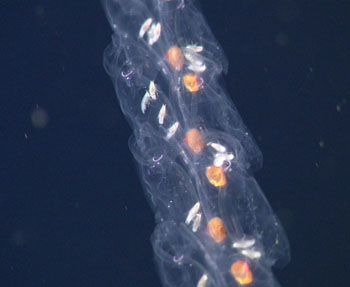 The tiny white objects are amphipods living in a salp colony.

The Gulf of California has a high abundance of the more spectacular eye types exhibited among the hyperiids. For example during our deep ROV dives we have seen large numbers of the bathypelagic hyperiid, Scypholanceola, that possess remarkable mirrored pigment cups. In contrast our shallower net trawls have captured a species of Paraphronima characterized by unusual eyes with 12 pairs of retinas.

A species of Paraphronima. Photo by Bill Browne.

Why ctenophores?
My other principal objective for this research cruise is to find and collect samples of the lobate ctenophore Ocyropsis to sequence its genome. In my lab we study ctenophores to gain insight into the early evolution of animal multicellularity. Ctenophores are a good model for this research because they diverged from other animals over 600 million years ago. Recent work with ctenophores has yielded unexpected results: many genes that we thought were important to organizing the animal body plan are not present in ctenophores.

The genus Ocyropsis is special because it is the only known group of comb jellies to maintain separate male and female sexes, a contrast to other ctenophores that have reproductive parts of both sexes in the same individual. We will be able to study what genes are being uniquely expressed in males and females, and whether Ocyropsis has separate sex chromosomes. 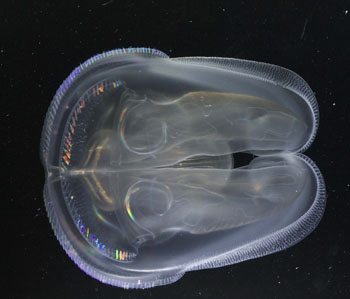 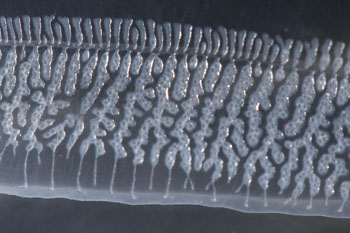 We have been extremely fortunate during this cruise. Our blue-water SCUBA dives have been successful in collecting two different species of Ocyropsis—Ocyropsis crystallina, and the much larger Ocyropsis maculata. The eggs are prominently visible in the female O. maculata. Photos by Bill Browne.

My collaboration with Steve and MBARI allows for a unique integrative study. We are able to collect genetic samples to study the evolution of eye types and of reproductive strategies. With this knowledge we can tease apart some of the truly remarkable life histories associated with these extraordinary organisms. 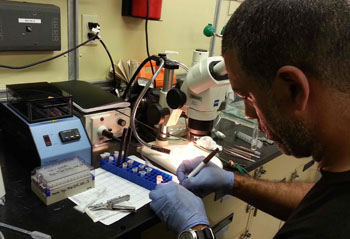 Bill working in the lab aboard the R/V Western Flyer. 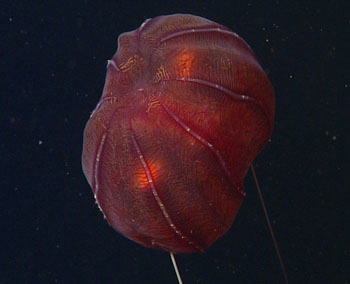 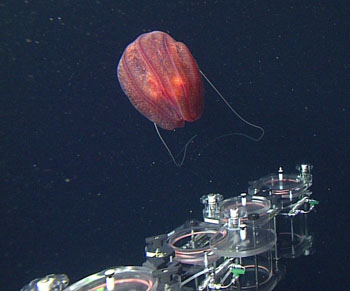 We dove in Alarcón Basin today and reached the bottom at 2,675 meters with the ROV. On its way back up we observed this amazing ctenophore Aulacoctena, which happens to be very bioluminescent. However, we decided not to sample it due to its immense size; it is slightly larger than a football. As you can see it was much too large to fit into our sample cylinders without being damaged.