Darrin Schultz writes: I work in Steve Haddock’s lab where I study bioluminescent organisms, animals that make their own light, much like fireflies. On our leg of the Gulf of California expedition, we have seen and documented many luminous creatures, including jellyfish, shrimp, fish, comb jellies, worms, tiny crustaceans, and even “glowing dolphins” surrounded by luminous plankton in the water. 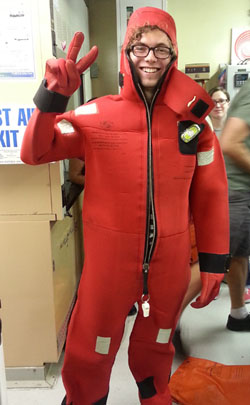 This is my first research cruise, therefore, I was selected to demonstrate how to quickly and properly put on an immersion suit in case an emergency arises aboard the Western Flyer. Safety first! 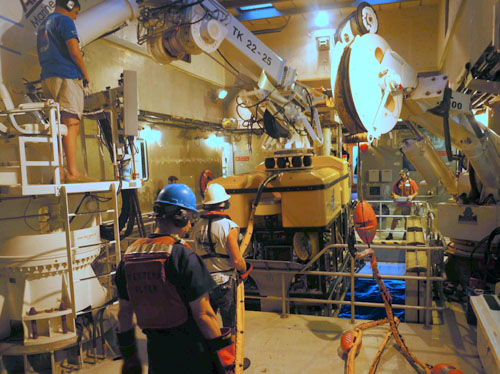 ROV Doc Ricketts is launched through the moonpool of the R/V Western Flyer.

The ROV is configurable to suit each scientist’s research needs, and in our case, we attach a custom array of blue LED lights to help find animals that fluoresce (like highlighter ink under a black light). When we come upon a potential candidate, we shut off all of the vehicle’s white lights and shine blue light only. If the animal is capable of producing fluorescence it will glow green, yellow, or sometimes even red, when the blue light excites special proteins. We found several such fish on this cruise, such as a small one with brilliant green fluorescent eyes, and a dragonfish with fluorescent spots on its belly. 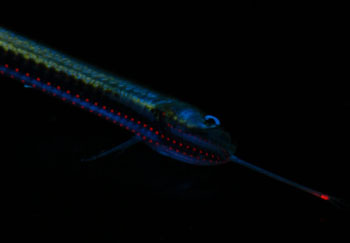 When we shined the blue LED lights on the black-belly dragonfish Stomias, we saw small spots of red fluorescence along the underside of the head and body. Maybe it should be renamed the red-belly dragonfish? Photo by Steve Haddock. 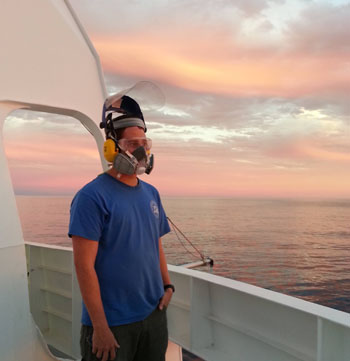 At 6:30 p.m. I had just enough time to watch the amazing sunset before the busiest part of our workday begins. One of the highlights of spending time at sea is watching the breathtaking sunsets, moonrises, sunrises, and the amazing star-filled sky. Acting Chief Mate Trevor Daviscourt took a break from boat maintenance to watch the sunset. 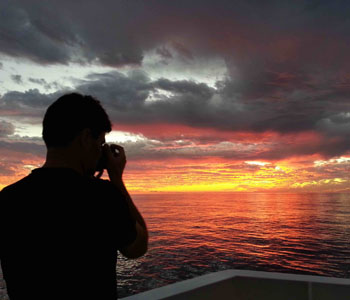 Steve Haddock took a photo of the sunset. 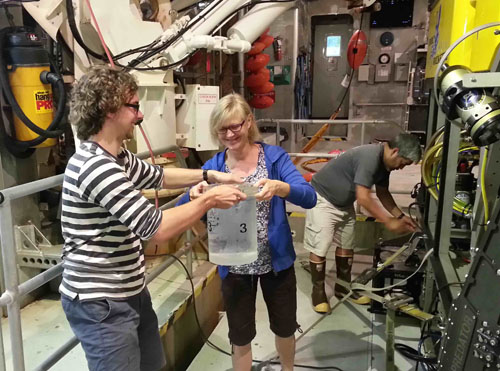 Darrin Schultz, Lynne Christianson, and George Matsumoto. The 12-hour ROV dive ended at 7:00 p.m. and we unloaded all samples from ROV Doc Ricketts and started filming and photographing the day’s catch. Most bioluminescence research takes place at night, when it is easiest to achieve dark conditions for photographing the animals.

One of the main groups of animals we have been filming is the ctenophores (pronounced TEEN-oh-fores), or comb jellies. They’re actually not closely related to jellyfish, and they usually look like translucent underwater eggs with iridescent stripes that propel them through the water. Some ctenophores resemble Darth Vader’s TIE Fighter made of gelatin, swimming through the water with wing-like lobes. 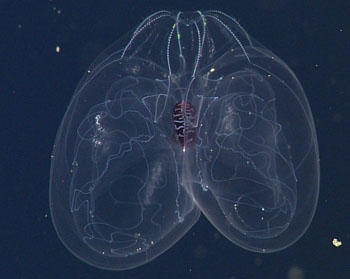 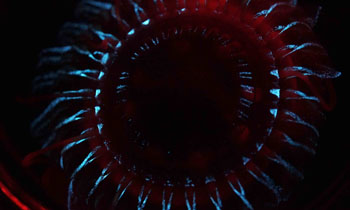 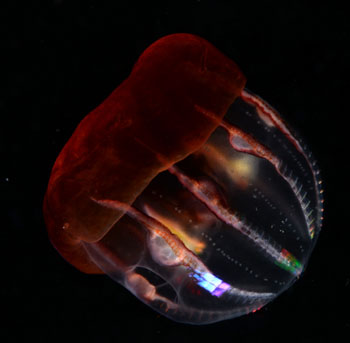 Most jellies exhibit bright green or blue bioluminescence. In some species like the medusa Atolla, waves of light pinwheels spread along its body’s surface. Others like the cydippid ctenophore Bathyctena exude a cloud of luminous particles, causing the water to scintillate in their wake. Photos by Steve Haddock.

By 9:00 p.m. we emerge from the dark room to take a short break on the deck of the ship. The water below is filled with tiny bioluminescent creatures smaller than grains of rice, which flash when the water around them is disturbed. Looking over the stern of the boat, I see a streak of water glow intensely blue, stimulated by the churning of the propellers. 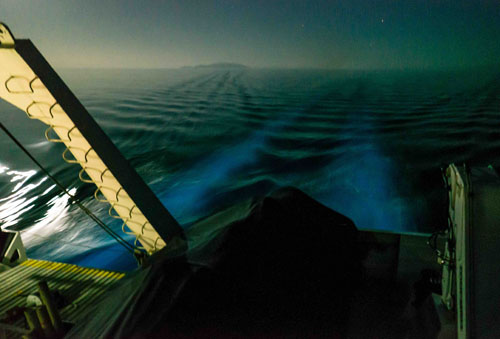 Bioluminescent dinoflagellates, ostracods, and other planktonic organisms glow after being disturbed by turbulence from the boat. Photo taken by Andrew McKee during GOC 2012 expedition.

At the bow, there are strange glowing shapes weaving to and fro. Confused at first, I hear high-pitched calls and quickly realize that it is a small pod of dolphins! The bioluminescent zooplankton in the water light up when they come in contact with the dolphins, and illuminate a perfect outline of dolphin snouts, fins, bodies, and tails. As the dolphins swim along, the bioluminescent lights stream behind them like shooting stars, leading us to our next dive site. 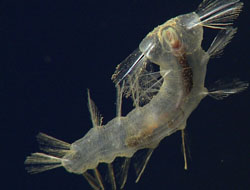 The bioluminescent midwater worm, Flota, lives near the seafloor, in waters over 1,500 meters deep.

It’s midnight now and things are starting to wind down. All of the animals have been sketched, photographed, labeled, and put away to study at a later date. The sun never sets for scientists who study bioluminescence.