Cat Munro writes: I am a second year graduate student in Casey Dunn’s lab at Brown University, and this is my third cruise aboard the Western Flyer. I’m interested in siphonophore evolution and development. Siphonophores are long rope-shaped animals that are relatives of corals and jellyfish. Siphonophore larvae bud off new “bodies” (also called zooids), which remain attached to a stem that elongates.

In relatives of siphonophores, similar bodies are produced asexually but they separate and form solitary individuals. Siphonophores operate as an integrated unit, and are the most complex of all colonial animals. The types and arrangement of zooids varies greatly in different species. Within siphonophores, each body is highly specialized to serve a function such as swimming, eating, digesting, reproducing, and defending the colony. The zooid effectively acts as an organ, providing different services to the whole colony. 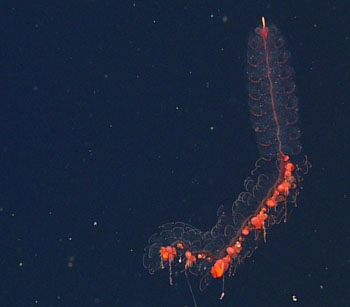 We were pleased to spot the beautiful siphonophore Marrus claudanielis on our ROV dive today. This was the first of many siphonophores that Casey Dunn, Phil Pugh, and Steve Haddock described together as part of their long series of collaborations.

I’m particularly interested in the gene expression patterns that underlie these vastly different shapes and features. Are old genes being used in different ways or are new genes playing a role? The Gulf of California is an important piece of the puzzle, as the genusRhizophysa is traditionally abundant here. Rhizophysa is evolutionarily relevant, as it is within the first evolutionary split that separates the five known species of cystonects (which includes Rhizophysa and the Portuguese Man-of-War, Physalia) and all other siphonophores (approximately 170 known species). It has a simplified body structure consisting of only feeding bodies and reproductive bodies. 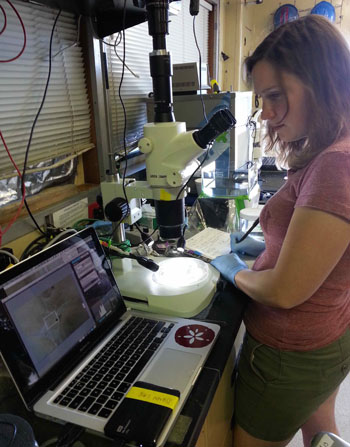 Cat Munro, a graduate student at Brown University, working in the lab aboard the Western Flyer. 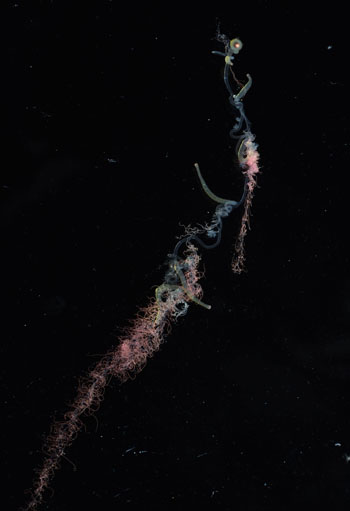 Image of the siphonophore Rhizophysa taken in the wet lab on a previous cruise by Steve Haddock.

Many siphonophore species are fragile and fall apart easily when they are collected by trawl nets. The best way to sample siphonophores is by blue-water diving or with an ROV. Working with Steve and using MBARI’s technological resources enables us to collect these delicate animals.

On the blue water dive today, I saw my very first Rhizophysa filiformis! I’m not sure how it caught my eye, as it was only about half a centimeter in length. I was so excited to see and collect this precious animal—I had to do a little underwater victory dance. I’m hoping this is a good sign that we will see more Rhizophysa before the end of the cruise. 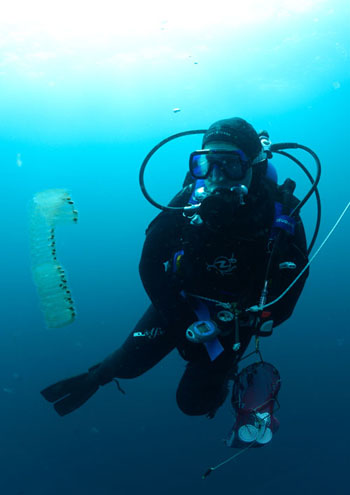 Cat Munro during a blue water dive with a salp nearby. 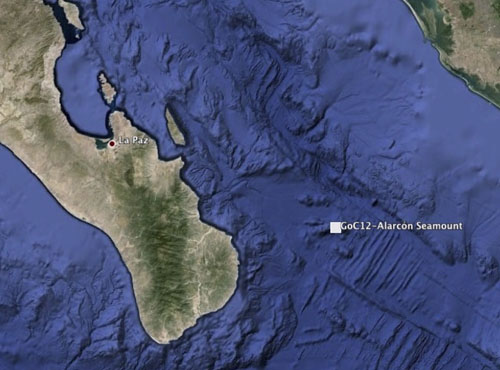 As we did during the 2012 Gulf of California expedition, we are visiting Alarcón Seamount aboard the R/V Western Flyer today.

The bottom was relatively shallow here (2,000 meters) because of the lava-strewn Alarcón Seamount, which rises from the deep seafloor. The walls of the seamount comprises very steep slopes of intact pillow lavas or broken pieces of pillow lavas, with dark glassy sediments below. Erik Thuesen was thrilled to sample numerous chaetognaths—a group of midwater worms he has been studying for many years, several of which are new species. One of the more strikingly beautiful animals we saw on this dive was an undescribed large black cydippid. This animal drifts across the bottom with its long white tentacles extended and appears to be trawling the waters adjacent to the seafloor for potential prey items.

Not everything we saw during our short time near the bottom was lovely. We noted several rattail fish infested with large parasitic copepods. We also saw a used paint can that reminds us of how human activities are impacting these remote deep-sea habitats filled with unknown natural wonders. 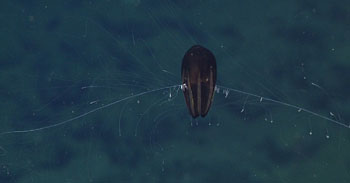 This large black cydippid is difficult to sample, even with the ROV. In the warm surface waters of the Gulf, this species does not make it up to the surface intact (although we have successfully recovered this species offshore of Monterey Bay) . 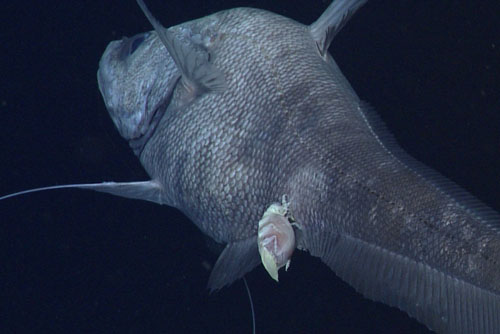 An engorged parasitic isopod clings to the side of this unfortunate rattail (Macrouridae). 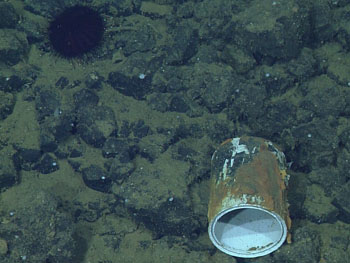 Although we often see trash while transiting across the sea bottom, it is still always surprising to witness stark evidence of our influence, even in places that may have never before been seen by humans.