For today’s ROV dive we took a second look at Farallon Basin. Diving in the same location for two consecutive days gives us a chance to conduct night operations (such as trawling) and the opportunity to see how the water column changes day by day. From our dive video it would have been difficult to guess that we did not transit to another station because the water column today is very different from what we saw yesterday. The Gulf of California is a dynamic environment, characterized by tidal flows, dense layers and aggregations, and blooms of conspicuous species. Today we observed many more large siphonophores such as several species of Marrus, Apolemia, and Erenna and collected a lot of amphipods. We spotted few of the small white narcomedusae that were a dime a dozen yesterday. 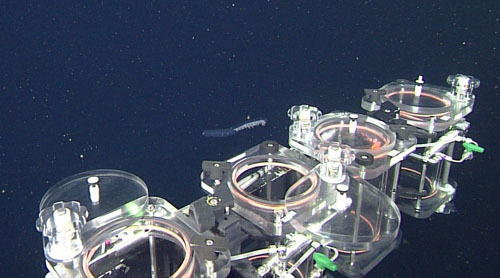 The ROV Doc Ricketts gently collects a fragile Erenna in a detritus sampler. These animals are too fragile to study from trawl-caught specimens, but we can learn a lot from the pristine specimens collected by the ROV. Haddock and his colleagues recently described a new species of Erenna that attracts fish using fluorescent lures. These large siphonophores are plentiful in the Gulf of California, likely because there is a large abundance of prey. 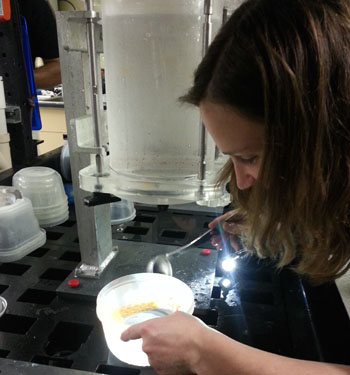 After the ROV is back aboard the Western Flyer, the researchers work quickly to get the samples out of the buckets and store them in a dark, walk-in cold room until they are ready to analyze them. Cat Munro very carefully removes a delicate orange physonect siphonophore (Bargmannia amoena) from one of the detritus samplers. 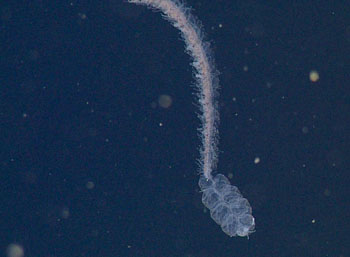 Several of our collaborators are working with Steve to document the vast diversity of siphonophores, and last year they described two species of Apolemia from Monterey Bay. We have already come across both species on our first few dives in the Gulf. This genus has few described species, but a large number of unnamed ones: Compare the Apolemia we posted yesterday with these two we saw today. Superficially they all look similar, but if you look closely at the siphosome (stem) you can see that they are very different. 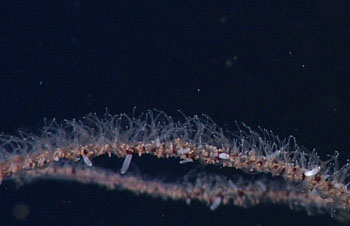 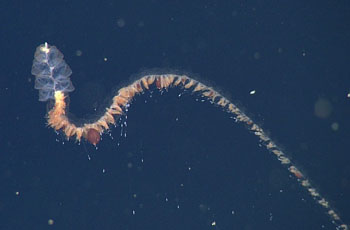 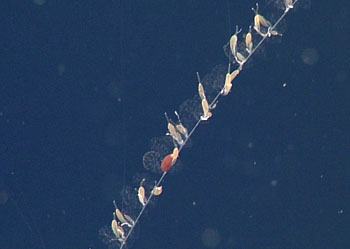 The blue water SCUBA dives also confirmed the significant daily changes that can happen in the water column. Yesterday the upper water was full of at least four different species of heteropods (comical-looking swimming snails with an elephant-like trunk). There were also lots of little ctenophores (Ocyropsis) and siphonophores (Sulculeolaria), but today all of these were scarce. So, if you are hoping to study a specific target organism, you have to take advantage of every collection opportunity because you can never tell what tomorrow holds.