My research program at GEOMAR Helmholtz Centre for Ocean Research Kiel investigates the life cycles, behavior, and ecology of pelagic fauna and, in particular, oceanic cephalopods. One specific goal of my work is to establish a baseline of pelagic animal diversity, distributions, and abundance in relation to the oxygen minimum zone (OMZ) in the Eastern Tropical Atlantic, in particular the Cape Verde area. The minimum depth of the OMZ in the Eastern Atlantic is around 400 meters, with a minimum oxygen concentration higher than in the Pacific OMZs. However, the oxygen concentration has been changing at a very high rate compared to other regions. The OMZ expansion in the Eastern Tropical Atlantic is responsible for habitat reduction of large, active, predatory fish such as marlin.

Despite their ecological importance, we do not know the impact of OMZ expansion on smaller pelagic organisms such as cephalopods (e.g., octopods and squids), mesopelagic fishes, and gelatinous organisms such as medusae, ctenophores, doliolids, and siphonophores.  We know that some pelagic organisms can withstand low oxygen levels for some time. For example, lantern fish migrate into the OMZ during vertical migrations. Some organisms (e.g., vampire squid, ctenophores, and owlfish) can cope for even longer periods in the OMZ.

However, the diversity, abundance, and distribution of pelagic organisms associated with OMZs in the Eastern Tropical Atlantic is very poorly known and species-specific distribution patterns need to be obtained. By establishing a baseline of pelagic fauna associated with OMZs, and by monitoring that baseline, we are better able to assess the impact of climate change on pelagic communities, the oceanic food web, the biogeochemical cycle, and fisheries. 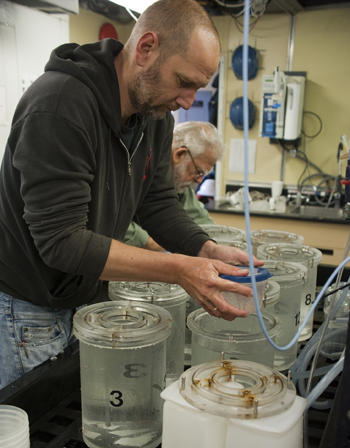 Henk-Jan carries sample buckets to the wet table in the wet lab on the Western Flyer.

Since the OMZ in the Gulf of California has such a wide vertical extension, it may be considered a future scenario for other smaller OMZs which are subject to expansion and intensification. In our first days of exploring the water column here, we can already see some general patterns for how species are distributed in relation to the wide OMZ. In the upper 100 meters, heteropods (pelagic molluscs) are very abundant, while below 100 meters, their abundance is much reduced. Between 200 and 800 meters, in the middle of the OMZ, we see fewer animals in general, a pattern that is typical for OMZs around the world, and which gave them the name “dead zones”. On the lower boundary of the OMZ in the Gulf of California, below 800 meters, it seems that certain species occur more frequently. Examples of such species are Chromatonema sp., Paraphyllina sp., cydippid ctenophores and the pelagic octopus Japetella diaphana. 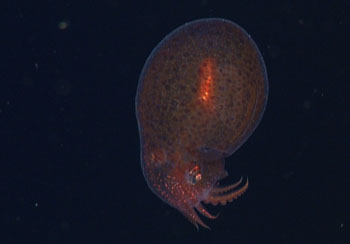 The midwater octopus Japetella diaphana is relatively common in the Gulf at depths around 800 meters. 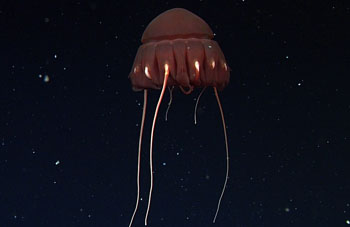 The large, red jelly Paraphyllina sp. is also a common member of the deep midwater in the Gulf.

My collaborative work with the Bruce Robison and the Midwater Ecology Group will eventually allow a comparison of the distribution of pelagic animals between areas with oxygen minimum zones of different intensity in different ocean basins.