We began the day bright and early, ready to deploy the MiniROV. This small ROV was designed as a fly-away system that could be shipped anywhere in the world and used on any ship. It has been used to explore Arctic seafloors multiple times. Now it’s getting the chance to explore the warm midwater here in the Gulf of California.

Although the MiniROV is much smaller than the Doc Ricketts, launching it still involves a coordinated effort with someone at the crane and the tether winch as well as the captain on the bridge working in unison, to ensure a safe deployment.

The MiniROV designer/pilot/engineer/mechanic, Dale Graves, is happy to have the help of the Doc Ricketts pilots on this expedition. They worked as a team to deploy and fly the ROV, plugging into the video systems already in place on the Western Flyer. We sat in the control room, just like during a Ricketts dive, working closely with the pilots to get imagery and samples with this versatile tool. 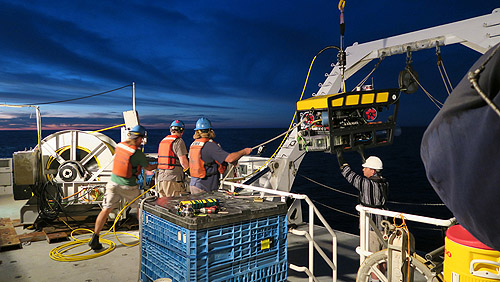 Around sunrise, the pilots and crew deployed the MiniROV from the fantail of the Western Flyer. On the left, you can see the tether spool attached to the deck.

The big advantage to having the MiniROV with us on this expedition is that we can explore the shallow midwater. ROV Doc Ricketts can explore and maneuver easily in deeper waters (200 to 4,000 meters), and scuba divers can reach depths down to about 30 meters. The MiniROV is perfect for exploring the depths that we can’t reach by other means (30 to 200 meters).

Here in the Gulf, the oxygen minimum zone is much wider than in Monterey Bay, forcing many of the animals to live closer to the surface. Using the MiniROV, we can look at (and collect) animals we only see in passing with the Doc Ricketts. We had a very successful dive with the MiniROV, followed by another Doc Ricketts dive in the afternoon, covering depths from the surface to 1,100 meters!

An example of an animal we just couldn’t study without the MiniROV is the giant larvacean, Bathochordaeus. They are found between 90 and 150 meters deep here in the Gulf—too deep for scuba divers and too shallow for ROV Doc Ricketts. Fortunately, these are perfect operating depths for the MiniROV! We were able to get close-up images and collect a few animals for Rob Sherlock, who was very excited to see these specimens.

Giant larvaceans are abundant in Monterey Bay, but we know very little about what species are found in the Gulf and how they fit into local food webs. We were also able to look at many of the other animals found in this depth range, giving us a more accurate picture of the midwater ecosystem as a whole. 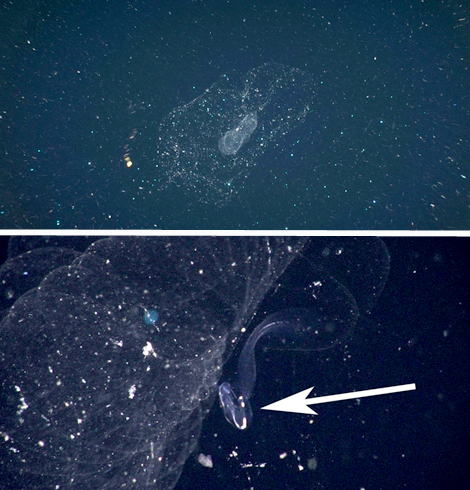 Here are two images of giant larvaceans we saw today. The upper shot shows a larvacean’s mucous “house,” and its smaller food-gathering filter inside. The “house” can be a meter (three feet) wide in Monterey Bay, although they are somewhat smaller here in the Gulf. The lower shot shows a portion of the intricate inner filter and the tadpole-shaped larvacean itself (the arrow points to its head). This animal was about 3 to 5 centimeters (1.5 to 2 inches) long.