I often mention the schedule we have of dawn, noon, dusk, and midnight casts but in reality, those four cast times are only the main events of each day. Today, for example, we had a cast at dawn, a pump cast at about 11 a.m., the recovery of the second sediment trap and deployment of a third, the recovery of the in situincubator and deployment of a second, a noon cast, a cast at 3 p.m. for experiments by Ryan Paerl of the University of Copenhagen, a dusk cast, a cast at 9 p.m. for experiments by Martín Hernández and Karla Mejia of la Universidad de Baja California, and later we will have our midnight cast. 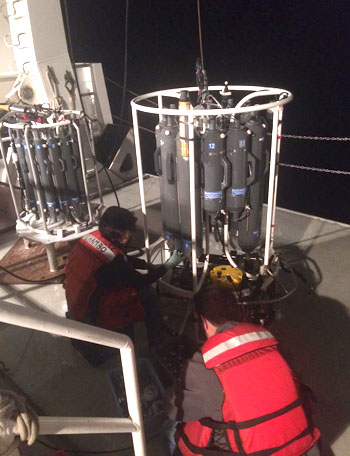 After the in situ incubator was recovered, everyone eagerly gathered to see if the first try had worked, if the chambers would be full of water and… they were! Footage from a GoPro camera attached to the device shows how all three chambers, pre-loaded with the nitrogen isotope, were filled with seawater 60 meters below the surface as planned (see yesterday’s post for a more detailed explanation of the incubator). Now, the scientists will have to wait until they are back on dry land to analyze the data they collected from these samples and compare it to data produced from traditional methods to see how they differ. But that the mechanics of the incubator worked is a great achievement and it could change how this team conducts their research in the future. 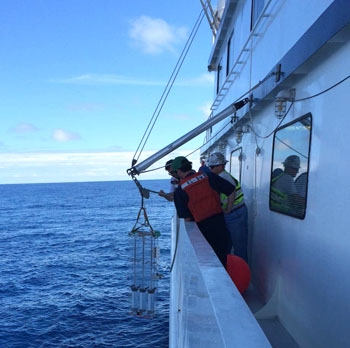 The team recovers the in situ incubator, all three chambers full of water.

As the time series draws to a close—we will make our final cast tomorrow afternoon—the team has to start planning for the end of the experiments and the packing up that follows. Not to mention the analysis that will begin once we take the thousands of samples we’ve collected over the past week back to our mainland laboratories. Aboard the Western Flyer, I’ve learned that even when you think the work is ending, it’s really just beginning. Time to rest again before my final midnight shift.