We’ve almost made it through the second day. We’re tired and hot (it’s been in the high 80s (F) every day, and even warmer inside the lab), but generally pleased with how smoothly we’re getting through the work. That doesn’t mean that every single cast goes perfectly. Today at dawn, for example, the rosette was empty before we had collected all the water we needed for each of the experiments the scientists had planned. This is a problem we’ve dealt with before; with so many scientists onboard, each with his or her experiments to carry out, there has to be a strict water budget for each cast and sometimes, the budget doesn’t add up to everyone’s needs. Still, with communication and compromise we usually make it work. 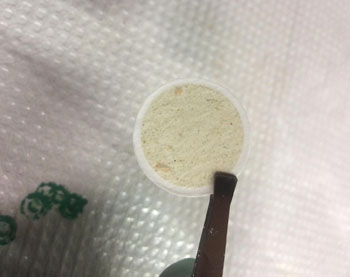 A filter shows the organic material collected from the sediment trap.

In addition to our usual cast schedule today, we recovered the first sediment trap that we deployed yesterday. After allowing it to drift for 24 hours, we used the tracking device on the attached buoy to locate the trap. Due to a strong current of about one mile per hour, the trap had drifted nearly 25 miles northeast of where we set it in the water. We moved the Western Flyer to this new location, recovered the first trap, and deployed a second. We are following the traps and continuing our time-series casts wherever the current leads us. 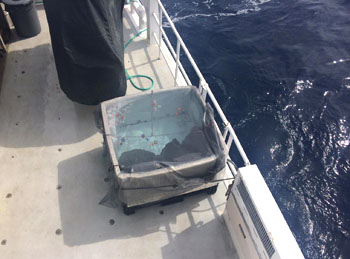 The samples float in the simulated incubator, moving as they would in open water.

The scientists also began testing a new device that was developed about a month ago in anticipation of this expedition: an in situ incubator. The scientists want to know how fast nitrogen transformations are occurring in the ocean. In order to do that, they add a tracer (a nitrogen isotope) to the water samples they collect and observe how fast the microbes in the water consume the isotope. Typically, the water samples are collected at a certain depth, brought onboard, treated with the tracer, and then placed in a simulated incubator that is meant to mimic the conditions of the open water (essentially a small pool filled with sea water). 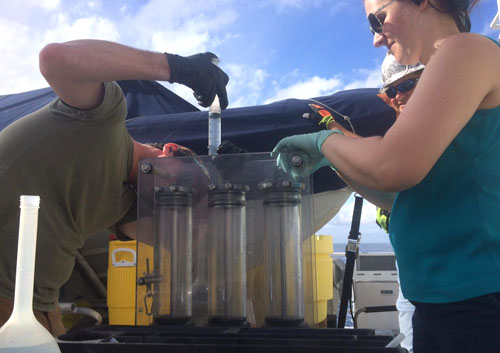 Jason Smith and Marguerite Blum prepare the in situ incubator with a nitrogen isotope.

When dealing with samples from low-oxygen waters, however, this traditional method involves unavoidable contamination of the water when it comes in contact with the air. The changes in temperature from the depth where the water is collected to the surface where the tracers are added could also have unclear effects on the results of the experiments. Therefore, the in situincubator was developed to allow the tracer to be added to a sample of water at depth, without bringing it onto the boat first. Much like a syringe, pistons inside each chamber move upwards, drawing water into the chamber when a timer sets off the mechanism. If it works, the samples can then incubate as they float in the seawater, right where they were bottled. The incubator is in the water now and will drift freely for 24 hours before we recover it tomorrow, much as we did with the sediment trap. We’ll see if it worked!