Another Day, Another Cast

At about 1:00 p.m. we reoccupied another GOC 2012 site and made our first pump cast on this expedition. Gernot Friederich, an ocean chemist at MBARI, has designed a system of water collection that differs from the Niskin bottle method. The cable that lowers the CTD rosette has a tube running through it that pumps water directly onto the ship. That way, we don’t have to wait for the rosette and the Niskin bottles to make it all the way back onboard before we are able to collect water samples and start running experiments. 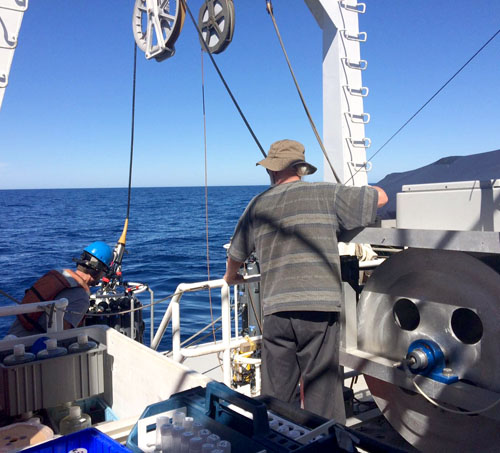 Gernot Friederich, right, and Erich Rienecker lower the pump cast into the water.

At our daily meeting, the scientists examined today’s findings, which provided more evidence that the ocean is warmer than in 2012. This led the team to reconsider the location of the three-day, intensive sampling site. Because of the warming trend, it seems that this location could be less productive than they originally thought. The results of the casts we make tomorrow will help the team decide where we will sample. 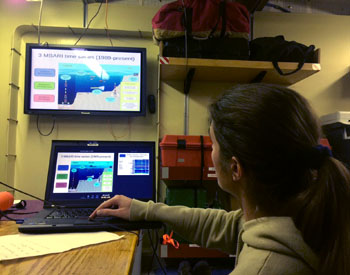 The mini-seminar series continued with Research Specialist Monique Messié’s presentation of her work on the integrated time series project at MBARI. For the past 25 years, scientists at MBARI have been independently collecting time series information from Monterey Bay. Monique is managing a team effort to integrate the data compiled by Francisco Chavez, Bruce Robison, and Ken Smith collected at the ocean’s surface, midwater, and seafloor, respectively. By combining these huge datasets, scientists can construct a more detailed picture of how Monterey Bay has changed—from the surface to the seafloor—over the last two and half decades. 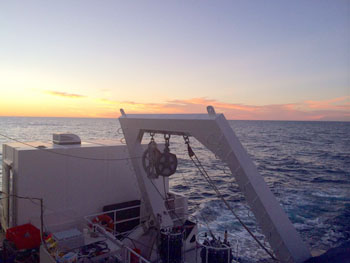 Another sunset as seen from the fantail.