Back to Sea, Back to Work

Although we crossed into a different time zone today (we are now in Mountain Time), the Western Flyer has no need to change its clocks an hour ahead. We will be on the boat for the next week so really, it matters very little what the time is elsewhere and it makes life easier for us if we don’t have to lose an hour. 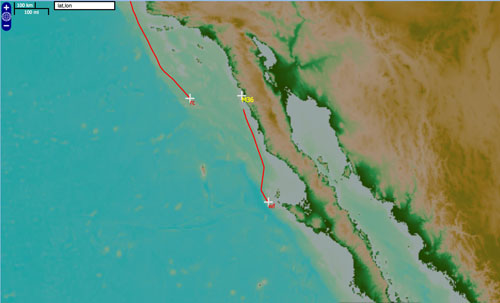 The current locations of the Western Flyer, right, and the Rachel Carson, the second MBARI vessel, will be conducting seafloor mapping studies.

At about 11:00 a.m. today, we reoccupied a site from the GOC 2012 expedition. The water was remarkably blue and crystal clear, a cue that there is little plant productivity in the area. The Secchi disk measured a depth of 29 meters—more than twice the measurement made at the M1 mooring in Monterey Bay on our first day. Productive waters, like those of Monterey Bay, are murky and the particles in the water allow less sunlight to penetrate. 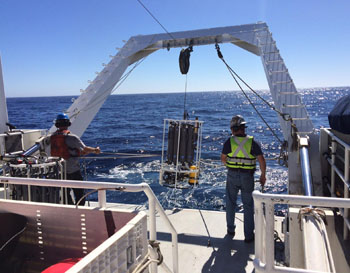 Erich Rienecker and Eric Fitzgerald lower the CTD for the first cast of the day.

The purpose of making CTD casts at the same sites where casts were made in 2012 is to expand time-series data that create a picture of how these waters are changing over the years. What we found from the casts we made today is that the waters in this location are significantly warmer than they were in 2012. This is consistent with the observations scientists have made in Monterey Bay over the last many months—the trend of warming waters and, by extension, decreased productivity over the last year is not unique to our bay.  Today’s casts were also the beginning of additional, multi-day experiments. 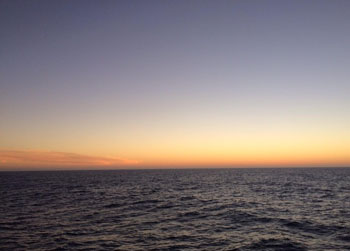 Sunset from the bow of the ship. Green flash not captured.

Later in the evening, when the work for the day was done, many of us took advantage of the good weather and calm conditions to sit outside and watch the sunset. It was a beautiful sunset on a clear horizon and for several of us, it was the first time we’d witnessed the elusive “green flash.”

Much like today, we will stop once tomorrow and once the next day at GOC 2012 sites but most of the next two days will be spent steadily steaming toward our ultimate destination: a spot south of Cabo San Lucas where we will begin three days of round-the-clock work.