After just one day in port, the scientists were ready to get moving and back to science. Therefore, no one was too pleased when our fuel truck was delayed, pushing our departure back. The fueling process itself takes about two hours as 75,000 liters of fuel are pumped into the ship. Once the fuel arrived, however, the ship’s crew had us gassed up and ready to hit the open water as soon as possible. 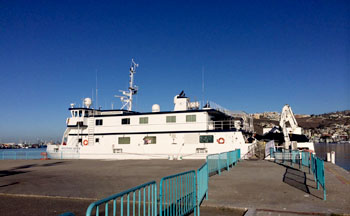 Before leaving port, we added two new scientists to our numbers: Professor Martin Hernández and a doctoral student, Karla Mejilla, of the Universidad Autónoma de Baja California.  Martin is a longtime collaborator of MBARI who participated in the Gulf of California 2012 expedition. He is an ocean chemist who is interested in ocean acidity. Karla, a student of coastal oceanography, specializes in sediments and trace metals in the ocean. 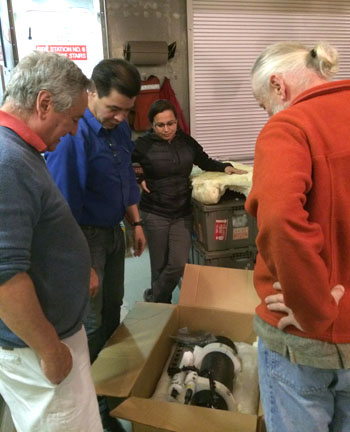 The newly expanded scientific team came together this evening to go over the schedule of CTD casts planned for tomorrow and beyond. Then Tim Pennington continued the mini seminar series we began with Jason Smith and Ryan Paerl the other night. Tim shared with the group the work that he and Marguerite Blum have done testing “Gulpers”—mechanical water collection devices that could one day be used instead of the ship-based CTD system. 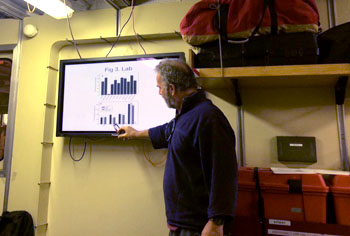 Tim Pennington talks to the science team about Gulpers.

Tomorrow morning we will be stopping at a GOC 2012 site to make three CTD casts. Back to science!