First day of the expedition

Like many of you reading this cruise log, I am not a scientist and I’ve never been on a research expedition before. Needless to say, boarding the Western Flyer—an MBARI research vessel named for the sardine boat that John Steinbeck and Ed Ricketts took to the Sea of Cortez in 1940—this morning was rather surreal. It was strange for even the most experienced shipmates as well, as we’d all boarded the boat 24 hours earlier only to a slight delay in our departure until today. On our second try, however, we successfully began the first leg of MBARI’s 2015 Gulf of California expedition. 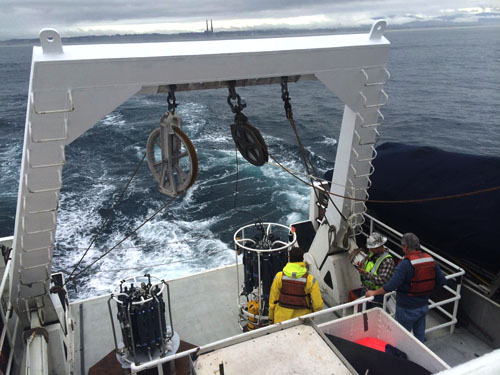 Erich Rienecker (left) and others prepare the CTD rosette for the cruise’s first cast at M1 mooring in Monterey Bay. Moss Landing can be seen in the distance.

On this leg, a team of scientists, crewmembers, and I—the chief scientist’s daughter—will be making our way along a large portion of the California coast from Moss Landing, California, to La Paz, Mexico. In past years, the scientists on this leg have stopped at up to 25 sites to collect water samples before reaching La Paz but this year, we will make very few stops on our way south; spending the majority of our time off the very southern tip of Baja California.

The waters off the coast of Baja California are of particular interest to scientists because, compared to the rest of the globe’s waters, the waters south of this Mexican peninsula have much lower levels of oxygen and trends suggest that the waters in Monterey Bay could resemble this intensive oxygen minimum zone (OMZ) in the future. Therefore, it is critical for scientists to study the life processes of organisms in waters where oxygen is difficult to come by.

The team of scientists onboard the Western Flyer has observed the decline of oxygen levels in Monterey Bay and other changes over the years by taking samples regularly from fixed locations in the bay since 1989. We added another data point to this 25-year time series today when we made our first stop 16 kilometers (10 miles) directly west of Moss Landing, a site called M1.

We didn’t have much time to spend at the site as the ship’s crew was concerned about tonight’s storm forecast and the tight schedule we are on to make our first port call in Ensenada, Mexico, on Monday morning. The compromise was to stop for just one hour.

Tim Pennington waited for the conductivity, temperature, and density (CTD) rosette to resurface once Erich Rienecker, the CTD expert, had sent it down to depth. The rosette holds 12 Niskin bottles that are filled with seawater at differing depths, in today’s case, ranging from 200 meters to the surface. While waiting, Tim showed me how to measure light penetration using a Secchi disk, a somewhat archaic but very practical device that is simply lowered into the water until it can no longer be seen. This Secchi depth, measured today at 14 meters, allows the scientists to rapidly determine the depths at which they will carry out their measurements. 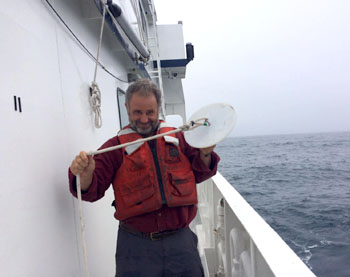 Tim Pennington shows off the Secchi disk, which he says will likely be obsolete in 10 years.

Once the rosette made it back onboard, I got a crash course in the water-collection procedures that form the heart of the cruise’s experiments and observations as we went to work bottling all of the samples necessary to running each of the planned experiments. Once everything was bottled, I even got to help out in the laboratory. Under the direction of Tim and Marguerite Blum, I helped them filter some samples, treat others, and freeze others in liquid nitrogen.

The water we collected today will allow the scientists to add to their extensive data library from which key insights continually emerge including the decrease in oxygen that has driven the scientists to look south for clues to Monterey Bay’s future.  In addition to the physical data about the water conditions measured from the CTD device itself, the suite of measurements taken from the water collected in the Niskin bottles include: 1) the rate at which the small plant-like plankton that inhabit the upper sunlight layer (phytoplankton) fix carbon dioxide into organic material by photosynthesis, 2) the chlorophyll concentration that these plankton contain, 3) the concentration of nutrients that stimulate photosynthesis, and 4) the concentration of oxygen and carbon dioxide.

As tomorrow is a transit day and we won’t be stopping to take further samples, I’ll be able to give a more in-depth look at some of the experiments that the scientists onboard have designed and what they are hoping to observe on this expedition.