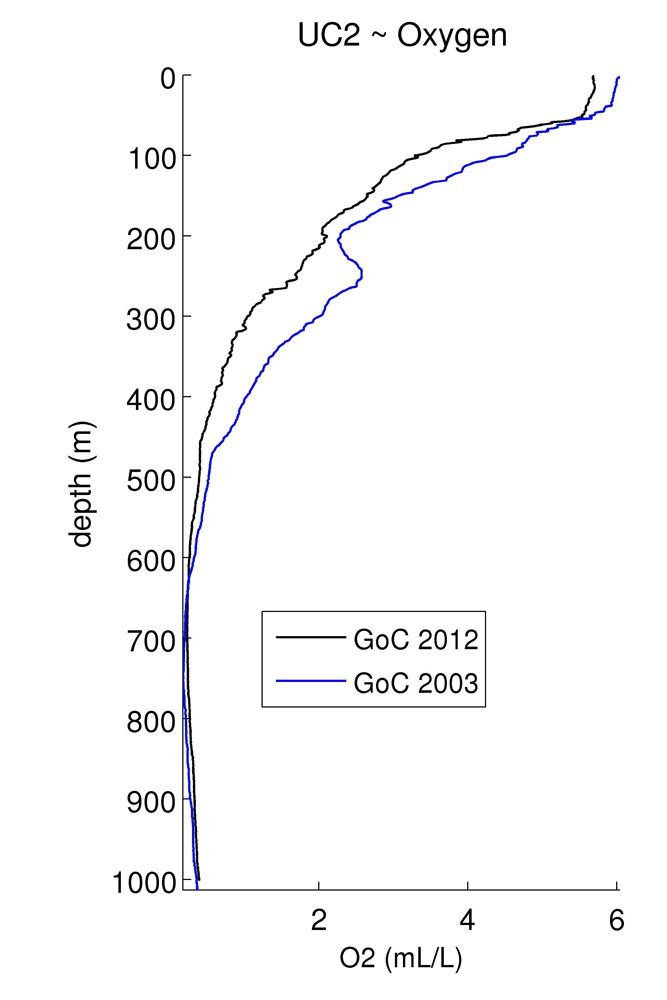 Line graph showing the oxygen content in 2003 against samples taken on our last expedition in 2012. The more recent levels are significantly lower. Samples were collected at Station UC2, 80 kilometers (50 miles) due west of Pismo Beach.

As the global ocean warms, it is thought that subsurface oxygen levels will decline. Previous Gulf of California expeditions have established that along the coasts of Alta and Baja California, surbsurface waters that are the source waters for coastal upwelling have declined notably in oxygen over the past decade.

Carbon, nitrogen, and oxygen cycling in the ocean are intimately linked. As oxygen declines, carbon dioxide and nitrate increases. When oxygen reaches low levels, nitrate is used in the respiratory process.

Researchers on this leg seek to better understand the nutrient and oxygen dynamics in an oxygen minimum zone since waters in Monterey Bay are trending towards a similar condition. Their approach will be to deploy a sediment trap array and float, and follow them carrying out CTD and pump casts every four-six hours for three days.

August 17, 2015
It’s 2:00 p.m. on Wednesday afternoon and we are getting close to La Paz, where the Chavez team will disembark. The crew and the ship, however, will be continuing on to the next leg of the Gulf of California expedition with a new group of scientists, the Midwater Ecology Group, in a few days.

August 17, 2015
Another busy day. I often mention the schedule we have of dawn, noon, dusk, and midnight casts but in reality, those four cast times are only the main events of each day.

August 17, 2015
We’ve almost made it through the second day. We’re tired and hot (it’s been in the high 80s (F) every day, and even warmer inside the lab), but generally pleased with how smoothly we’re getting through the work.

August 17, 2015
After our nightly meeting and a presentation by Martín Hernández, the group’s focus shifted to preparation for the continuous experiments that will begin tomorrow, literally at the crack of dawn.

August 17, 2015
Although we crossed into a different time zone today (we are now in Mountain Time), the Western Flyer has no need to change its clocks an hour ahead.

August 13, 2015
After just one day in port, the scientists were ready to get moving and back to science. Therefore, no one was too pleased when our fuel truck was delayed, pushing our departure back.

August 3, 2015
We arrived in Ensenada early this morning and began the process of clearing the R/V Western Flyer through Mexican customs. The process went smoothly and Francisco Chavez was able to make it off the boat in time for his talk at El Caracol—the soon-to-be maritime museum of Ensenada where he spoke about the Gulf of California 2015 expedition.

August 3, 2015
Today was an unusual day for the scientists aboard the Western Flyer—we made no new casts and spent the entire day in transit. Travelling at about 10 nautical miles per hour since leaving M1 yesterday, we are now off the coast of San Diego.

August 3, 2015
Like many of you reading this cruise log, I am not a scientist and I’ve never been on a research expedition before. Needless to say, boarding the Western Flyer—an MBARI research vessel named for the sardine boat that John Steinbeck and Ed Ricketts took to the Sea of Cortez in 1940—this morning was rather surreal.