Elena Krylova writes: Vesicomyid clams are conspicuous and consistent members of hydrothermal vent and hydrocarbon seep communities worldwide. Nevertheless, they remain one of the most poorly understood bivalves. Two vesicomyid species were described from the Gulf of California by the American mollusc expert William Healey Dall more than 100 years ago. Those clams were larger than expected for deep-sea bivalves and overall very strange, and nobody could imagine that they lived in such extreme environments and had symbiotic bacteria in their gills.

Immense populations of vesicomyid giant white clams were more recently discovered around hydrothermal vents on the Galapágos Rift. This species was given an evocative name, “magnifica”, and became an iconic species of hydrothermal vent communities. We have not given it a genus name here because we are still unsure how to classify this clam within the family Vesicomyidae, but that is one goal of our morphological and molecular investigations. The “magnifica” clam was previously known to occur at hydrothermal vents 2,450 to 2,700 meters deep along the entire East Pacific Rise from 21 degrees north to 22 degrees south latitude, across a distance of 5,000 kilometers (about 2,800 miles). 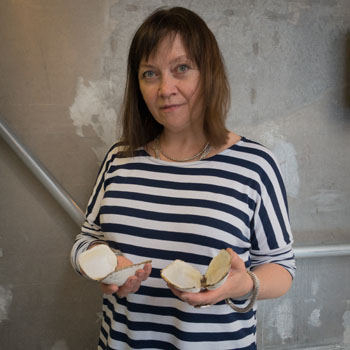 During this expedition we were lucky to observe spectacular populations of “magnifica” at 2,300 meters deep near the impressive Alarcón Rise vents at 23 degrees north latitude. This location now creates a new record for this species and extends its range 300 kilometers (180 miles) to the north. It is the first discovery of this clam in the Gulf of California along a northern segment of the east Pacific Rise. The “magnifica” clam typically lives perched in crevices in basaltic lavas with the anterior-ventral part of its body the lowest. It has very short siphons; it is actually only possible to see apertures between mantle margins. We observed an unusual habitat for some young specimens, with their bodies burrowed deeply in the soft sulfidic sediments and only the posterior third of the shell protruding. 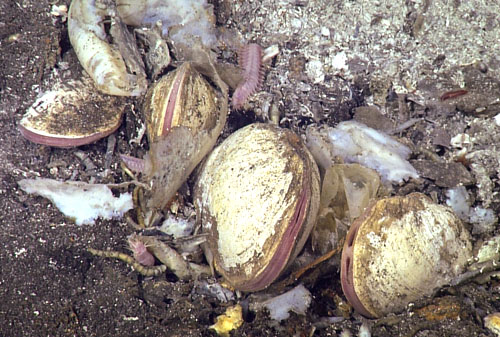 You can clearly see pink mantle tissue in these “magnifica” clams. You can also see the extremely short siphon on the clam on the right.

We also encountered another large clam, Archivesica diagonalis, at depths of 3,700 meters in the Pescadero Basin. The clams were nearly buried in soft sediments near the active mounds and hydrothermal chimneys. Often their siphons were the only part of the clams protruding from the sediment so they were hard to find even though the population appeared to be very dense.

The Archivesica diagonalis clam siphon is quite long for a vesicomyid. Often an anemone was attached to the posterior part of the shell, looking just like a second siphon. It made the clams easier to sample, and the pilots called the anemones “clam handles.” This species has a very wide distribution including eastern Pacific cold seeps from the Oregon margin to Peru, and also the Nankai Trough off Japan. It was known from depths of 1,900 to 3,100 meters, but our present record extends its depth range to 3,700 meters. This is also the first record of this species in the Gulf of California. The Alarcón Rise hydrothermal vents were not too far away (about 80 kilometers, or 50 miles, to the south) and within this species’ depth range. It could easily disperse there, but we did not find it at the hot vents. Perhaps more intricate ecological factors affect its distribution on these regional scales. 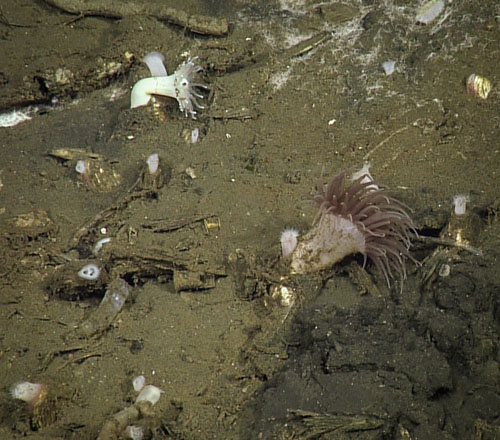 You can see the siphons of the Archivesica diagonalis clams poking up out of the sediment. A couple of these clams also have anemones attached to them. 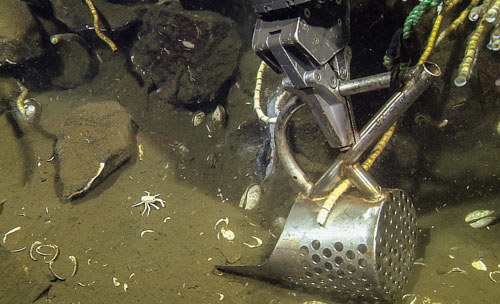 This clam scoop is the best way to sample clams without damaging their fragile shells. Thankfully they don’t run very fast!