Shannon Johnson: Today was an amazing day of exploration and discovery at one of the most exciting natural habitats of the deep sea—black smokers. We explored enormous hydrothermal vent chimneys, majestic columns eight to 37 meters tall, emitting voluminous plumes of black smoke. The chimneys were covered with dense thickets of giant Riftia tubeworms, tiny lepetodrilid limpets, pretty Alvinella Pompeii worms, large pink nereid worms, white Munidopsis squat lobsters, and grumpy-looking Bythograea crabs. Slender pink fish, Zoarces eelpouts, nestled calmly among the dense tube worms. When Bythograea crabs entered a Riftia colony, the large worms quickly withdrew into their thick leathery tubes, but the approach of an eelpout caused no reaction. The crabs eat Riftia when they can, but the eelpout eats amphipods, tiny crustaceans that are abundant on and among the worm tubes. 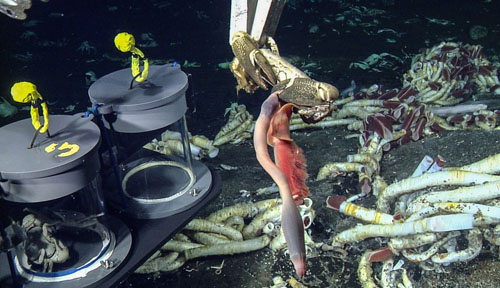 This crab was eating a Riftia tube worm and wouldn’t let it go, even when the manipulator arm of the ROV picked it up!

Dense colonies of the giant Calyptogena clams cram into the cracks between basaltic rocks at the base of these chimneys. The clams can be a foot long, but their shells are as thin and fragile as egg shells. We saw a number of species that are new to science including a serpulid tube worm densely covering the sides of a 20-meter-tall chimney. 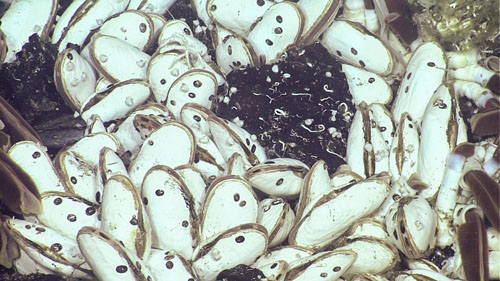 Many areas that we explored were full of only the scattered shells of dead Calyptogena clams, but this spot was densely populated with beautiful living ones.

During the ROV’s descent we were engulfed in black emissions about 100 meters above the seafloor.  The black “smoke” consists of polymetalic sulfides that precipitate out of the hot vent water as it interacts with the cold seawater. We took numerous samples of the smoky water with the goal of identifying the larvae of benthic vent animals. The larvae are believed to disperse amongst discrete vent fields by hitching a ride in the buoyant vent fluids that are moved along ridge axes in deep-ocean currents. Understanding how various vent populations of a particular species are connected will help to design sanctuaries aimed at preserving these remarkable deep-sea habitats. Many of the larvae are very small and difficult to identify, therefore we use high-throughput DNA sequencing to identify species in our water samples. 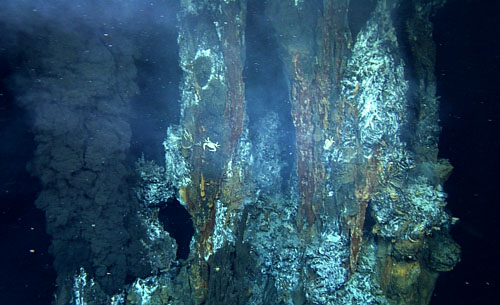 Shannon Johnson sampled this smoker (and others like it) for larvae by collecting water into containers attached to the ROV. She sampled both inside and outside of the plumes, and will compare the larval communities of each back in the lab.

To aid in our efforts, we invited three leading experts to participate in this expedition: a worm expert, Greg Rouse, of Scripps Institution of Oceanography at the University of California, San Diego; an expert in clam taxonomy, Elena Krylova, of the P.P. Shirshov Institute of Oceanology in Moscow, Russia; and an expert in ecology and biogeography, Verena Tunnicliffe, of the University of Victoria, Canada. We have just begun to understand this remarkable and poorly explored ecosystem. During today’s dive, Chief Scientist Bob Vrijenhoek commented, “This is the most spectacular vent I’ve ever seen,” and he has explored a great number of vent systems worldwide for the past 25 years. 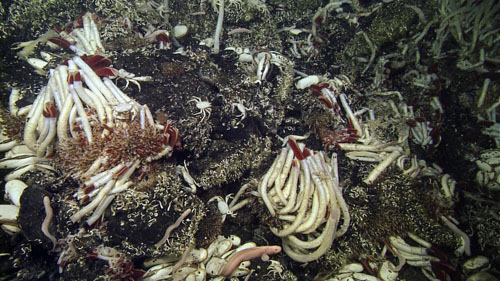 This area was a vast wonderland of biological seafloor activity.