Mounds and chimneys in Pescadero Basin

Greg Rouse writes: Today we returned to Pescadero Basin to continue exploring the active mounds and chimneys in the area at 3,700 meters depth and to document and collect various animals. These biological collections are important as they will allow us to compare vent systems further south on the East Pacific Rise with those further north in the Guaymas Basin and may also result in the discovery of new species.

We made several detailed video transects over the sediments and up the chimneys to allow Verena Tunnicliffe to assess the distribution, biomass, and abundance of the fauna. Overall, the vents in this locality were spectacular, but quite a few organisms that we expected to see here were missing. As with yesterday, our megafauna sightings included the occasional giant tubeworm, Riftia pachyptila or Oasisia alvinae. The large vesicomyid clams from yesterday were tentatively identified as Archivesica diagonalis by Elena Krylova, and we continued to see many of these today. As for arthropods, there were many white galatheids (Munidopsis), but no true crabs such asBythograea. There were numerous other polychaetes such as Archinome and Ophryotrocha but we failed to find any hesionids or ampharetids. We found occasional large patches of Provanna snails but there was a surprising lack of limpets. The most spectacular chimney was one we referred to as the Matterhorn. 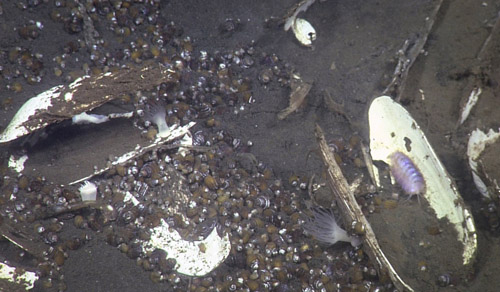 The Archivesica diagonalis are the clam shells, Provanna are the tiny and abundant snails. The colorful little scale worms are Branchinoto gluma. 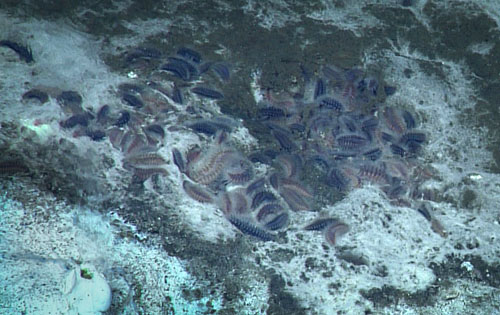 A dense patch of Archinome scale worms gather in a bacterial mat. 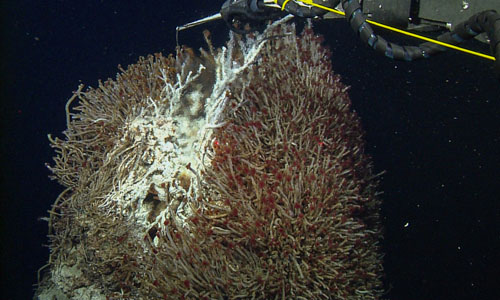 The temperature of the fluid venting out at the top was 56-60 degrees Celsius. 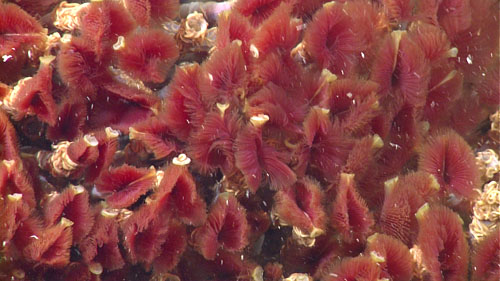 The “Matterhorn” was completely covered with Oasisia alvinae and about 30 were collected for population genetics studies. 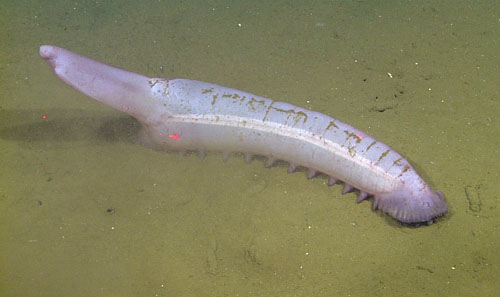 The largest catch of the day was a spectacular sea cucumber, Psychropotes longicauda. This specimen was much larger than the generally recorded size for this species. 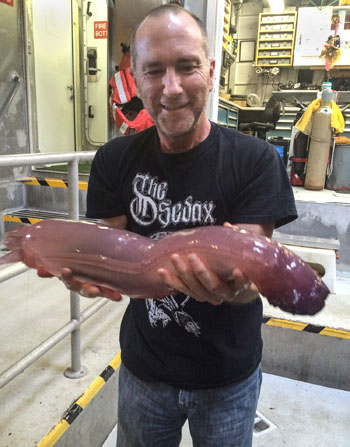 It was so big that it could not fit into any of the containers on the ROV Doc Ricketts. It had to lie in the back of the sample drawer.