Verena Tunnicliffe writes: Nestled in a very deep valley in the Gulf of California lies what we’ve called the “Mermaid Castle” where tubeworms and anemones sway in the wafting warm waters. Well, it did look a bit like a fantasy land to us! So close to land, the seafloor slumps to nearly 4,000 meters deep in the rift where the vents emerge through layers of mud to build mounds and chimneys over 10 meters tall. On the outskirts of the carbonate structure that looked like a castle, fields of anemones carpet the rocks while clams extract the dissolved sulphides emerging through the mud to feed their symbionts. Many species of animals were present but on this dive we investigated the tubeworms first.

The “giant” Riftia (the heaviest worm on the planet) is here only in small numbers and usually surrounded by a smaller relative called Oasisia–the oasis worm. They cluster around small openings and compete for sulphide gas where vent water emerges. The hemoglobin in the blood is necessary to take up oxygen but also imparts the brilliant red coloration. In rich vent water, Riftia can grow up to two meters and weigh in at 650 grams (23 ounces). At the “Castle”, this species is the reigning queen. 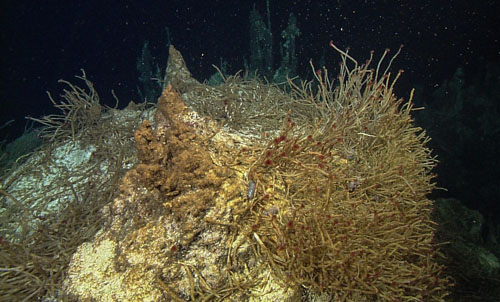 The top of the vent where we sampled today looked like a castle with dormant chimney towers in the background. There were thousands of Oasisia tubeworms (red plume with brown tube) and numerous purple scale worms (Archinome levinae, a new species named in 2013) throughout the vent field.

It is a delight for me to explore these hot vents at the northern extent of the East Pacific Rise. I have worked for three decades on the ecology of Pacific hot vent communities to understand how the organisms adapt to vent conditions and interact with geological processes. For example, vent communities on the northern East Pacific Rise off Mexico and on Juan de Fuca Ridge off Washington have similar community structures that include tubeworms, snails, clams, alvinellid worms (among others), yet the species composing these communities are almost completely different.

This divergence reflects geological history: 30 million years ago, North America started to override the spreading ridge, slowly isolating the small northern Juan de Fuca Plate and creating the San Andreas Fault. Natural selection then took the species in these communities on separate paths. Over the years, my lab at University of Victoria (in British Columbia, Canada) has worked on a very wide range of hot-vent species to understand how they work and their specific adaptations to the conditions of this very special ecosystem.

This Riftia worm sits snugly next to thousands of smaller Oasisia tubeworms. Their brilliant red coloration is from the haemoglobin in their blood. Pictured also is a closer view of the beautiful, blue scale worm, (lower right corner of image).