Wrapping up the Volcanoes and Seamounts leg

Dave Clague writes: This has been a great cruise with almost all of our initial goals met and some new discoveries added on top. As Rob Zierenberg noted yesterday, numbers sometimes tell a story and here are some more from this cruise. We collected 191 lava samples, 14 samples of hydrothermal deposits, 3 mudstone samples, 82 short (30 centimeters) push cores, 16 long (120 centimeters) push cores, 33 animals, nine Niskin water samples, five water samples (in gas-tight water samplers) at hot vents, and seven water samples (in titanium major water samplers), also at hot vents. We also measured temperatures at seven hydrothermal vent sites and recorded more than 90 hours of high-definition video of the ocean floor. Of course, all these samples will need to be analyzed once they return with the ship to California. Until those analyses are completed, we won’t really know what we have learned about Alarcón Seamount and Rise, the adjoining Tamayo and Pescadero transforms, and the Pescadero Basin.

I expect we will significantly add to our understanding of how these complex tectonic/magmatic/hydrothermal systems work. We started with some fundamental questions that we wanted to address:

The discoveries along the way include the abundance of low-temperature, higher silica lavas on the northern Alarcón Rise, the abundance and wide age range of volcanic activity along the transform faults and the occurrence of low-temperature venting on the transforms, possibly related to that volcanic activity, the presence of four active hydrothermal vent areas on Alarcón Rise that will be important sites for our biologist colleagues during the next leg, and the unexpected discovery of high-temperature carbonate chimneys with distinctive animals communities in Pescadero Basin.

All we have learned will be revealed in time, as science is not for the impatient!

Our great success reflects a lot of hard work from everybody on the ship. Without  Captain Andrew McKee and mates Matt Davis and Ross Diaz on the bridge, we could not get to our selected study sites nor position the ship to be able to do the ROV operations. Without the incredible skill and patience of ROV pilots Knute Brekke, Randy Prickett, Mark Talkovic, Bryan Touryan-Schaefer, and Ben Erwin we would not have collected all those samples nor been able to record the many hours of high-definition video. The ship’s crew and engineering staff assists with the launches and recoveries of the ROV and keeps everything on the ship working, sometimes under very difficult circumstances. Our evening program of wax-tipped rock coring could not have been accomplished without Erik Larson and Perry Shoemake running the winch for us. Patrick Mitts kept us well-fed and happy with his great meals and highly varied music selections in the galley. The seasoned MBARI science staff of Jenny Paduan, Brian Dreyer, and Lonny Lundsten made it easy for me to be chief scientist. Our Mexican colleagues Ron Spelz and his graduate student, Florian Neuman; graduate students Abbie Johnson and Chrissy Maschmeyer; and guest scientists Rob Zierenberg, Julie Bowles, and former MBARI postdoctoral fellow Ryan Portner all did a superb job in the control room and during sample processing post-dive. This was truly a great team effort and the success of the cruise reflects well on us all. 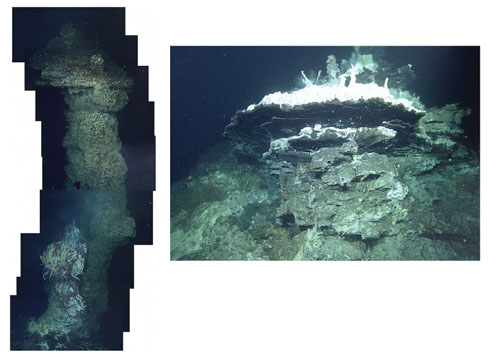 (left) Mosaic of a hydrothermal chimney at the Meyibó vent field on the Alarcón Rise. The lower part has more active flow of vent fluid and hosts Riftia pachyptila tubeworms. The upper part of the chimney is no longer actively venting (the plumbing of these systems can become clogged with minerals precipitated from the vent fluids); it is covered with serpulid worms that flourish in cooler, yet sulfide-rich, water near active vents. (right) Looking up at the underside of a large flange with hot vent fluid ponding underneath, high on a chimney at the newly discovered Pescadero Basin vent field. This chimney is the same pictured at the bottom of the April 12 log, and we will be naming it “Gatito de la Fumarola”, which translates to “Kitten of the Fumarole” because Rob Zierenberg visualized the two laser dots of the ROV as two eyes of a kitten on a fumarole. Rob has spent his career studying sulfide deposits and hydrothermal vents from the Gorda and Juan de Fuca Ridges, the East Pacific Rise, Iceland, and now the Gulf of California.