Understanding the evolution of Alarcón Rise

We have been trying to understand the evolution of the entire Alarcón Rise between the transform faults, including the structural transition from spreading on the ridge axis to strike-slip (side-by-side) motion on the transform faults. To examine the structure of these transitions, we collected high-resolution bathymetric and seismic profile data using the mapping AUV and recorded fault offsets and orientations. In addition to the expected faults, the maps revealed what we interpreted to be extensive fields of lava. Many of these flows have rough surfaces, suggesting little time to accumulate sediment (which would obscure the surface roughness) or to be cut by faults.

Such extensive lava flows are somewhat unexpected as the movement along these faults is supposed to be mainly strike-slip rather than extensional, as needed to inject dikes to bring the magma to the surface to erupt. There are also several mounds along each transform fault that are large (over 500 meters across) and have complex bathymetry. The three such mounds on the Pescadero transform fault show no sediment layering in seismic profiles, indicating that they are lava, or at least draped with lava. 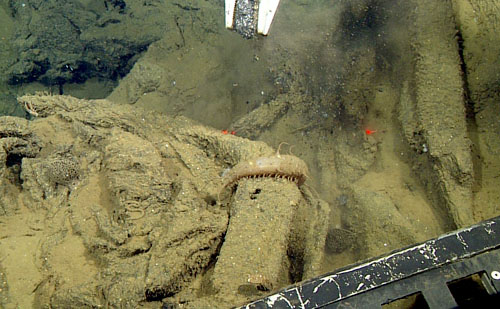 Collecting a sample of a ropy sheet flow that had been an extensive, vigorous eruption on the Pescadero transform fault. This flow is unusually plagioclase crystal-rich (the white flecks in the sample) compared to most lavas of the Alarcón Rise. A sea cucumber is in the center of the photo.

What did we learn from the ROV dives? First is that the surfaces that we interpreted as lava flows in our maps are indeed lava flows. Second, the lava flows have a large range in age as seen in sediment cover from almost none to deeper than our 1.2-meter cores. This probably represents a range in eruption ages of several tens of thousands of years. Such abundant emplacement of lava flows also tells us that the strike-slip faults are changing their orientation over time as the Gulf widens.

We also learned that the large mounds are indeed mostly covered with lava, but the flows are shattered into fragments. We think these mounds formed by injection of horizontal plates of magma called sills into the sediment beneath surface lava flows. The sills then lifted up the overlying sediment with their surface lava flows and the deformation shattered the flow surfaces.

Comparison of variable sediment cover on pillow flows at the Pescadero transform fault. Left, about a meter of sediment. Right, very little sediment. Extrapolating from previous radiocarbon dating of sediment samples collected here, we believe, the flow in the left photo could be 25,000 years old, while the flow in the image on the right could be less than 150 years old. This huge range of ages supports the idea that the transform fault is not just strike-slip but has transtensional motion, and has been for a long time. Transtensional motion means that two different blocks of crust (or rocks on either side of a fault) are pulling apart from one another and sliding past one another at the same time.

Along each of the transform faults we have discovered communities of chemosynthetic animals supported by low-temperature venting through lava flows. These vents may be hydrothermal in origin related to heat extraction from underground hot rock, or cold seeps related to fluid expulsion from the sediment underlying the surface lava flows. It will take shore-based analytical work to determine the process that forms these fluids.

Lonny Lundsten writes: During our dive at the Pescadero transform fault, we unexpectedly encountered a cold-seep community. Similar to the hydrothermal vent communities that we encountered at the hydrothermal vent fields, cold-seep communities rely on chemical-rich waters to provide energy for bacterial communities. Unlike hydrothermal vents where the chemical-rich water is super-heated and escapes through vents in the seafloor at high volume, the chemical-rich fluids at cold seeps seeping up slowly through cracks in the seafloor or when deeper sediment is exposed. At these seeps, we observed non-symbiotic, flocculent bacterial mats along with dense populations of large, cold-seep tubeworms (Lamellibrachia sp.), vesicomyid clams, and serpulid worms.

The cold-seep clams and worms provide a stable home to symbiotic bacteria that live within their guts and thrive off chemical-rich waters of the seep. The bacteria, in turn, provide food for their hosts. The seep community that we observed today appeared to be extremely healthy and cover a large area. We found limpets and snails, galatheid crabs, and other worms living within the large clumps of tube worms. Cold seeps and hydrothermal vents appear as oases, in the veritable desert of the deep sea and are mesmerizing to observe with their profusion of life. 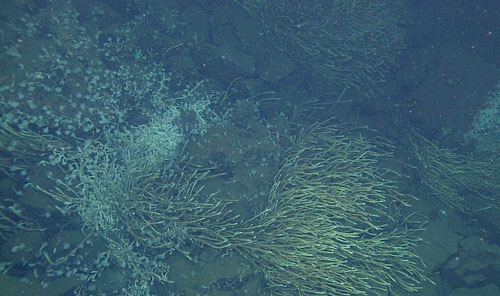 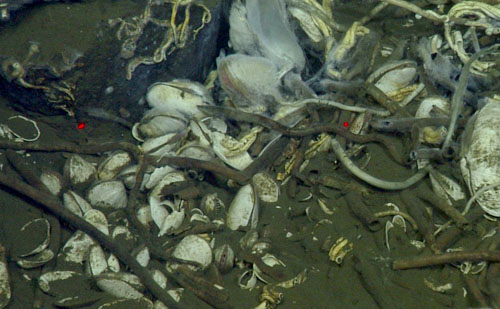 Dense populations of (top) giant tubeworms (Lamellibrachia sp.), serpulid worms, and (bottom) clams thrive at the cold seeps we observed. These dense populations of animals are supported through a symbiotic relationship with bacteria that thrive on the chemical-rich waters seeping up through the seafloor. The clams and worms provide a stable home to certain species of bacteria, which, in turn, provide food for their hosts. 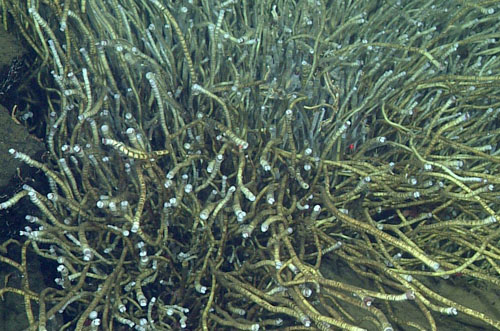 High densities of seep worms (Lamellibrachia sp.) are supported by utilizing chemosynthetic bacteria that thrive off chemicals in the seep fluids. These worms are related to the worms found at hydrothermal vents and other cold seeps; they all belong to the family Siboglinidae. 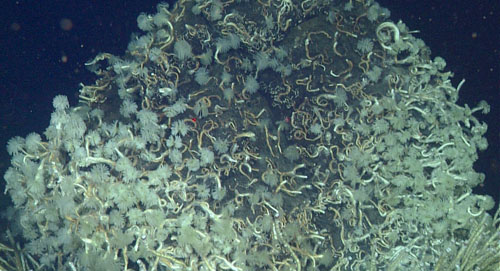 High densities of serpulid polychaete worms, seen here as the white pom-poms, were consistently found in close proximity to the larger Lamellibrachia sp. It is unclear whether the serpulids also utilize bacterial symbionts, but it seems likely as they have only been seen near the cold seeps and hydrothermal vents. Specimens collected today can be used to determine the species and whether or not they have chemosynthetic bacterial symbionts.