Jenny Paduan writes: Today’s dive was, as the Wisconsinites on board (Julie Bowles, Knute Brekke, and Patrick Mitts) would say, a smorgasbord! There were new and very impressive hydrothermal chimneys, mounds of lovely elongate basaltic pillows, and a vast flood of a relatively young, jumbled sheet-like lava flow, which will be discussed in tomorrow’s cruise log.

We began the dive off-axis on a fault-uplifted mound at a cluster of spires that we identified in the AUV bathymetry to be large hydrothermal chimneys. Indeed, they turned out to be another new field of black smokers! The new field will be named “Tzab-ek”, the Mayan name for the Pleiades “Seven Sisters” star cluster, which the Mayans saw to be the rattle on a snake’s tail. The black smokers in this field are 350 degrees Celsius and measure 31 and 33 meters tall, with several smaller ones that are likely still growing. These black smokers and their predecessors have built a large sulfide mound up to five meters thick. This puts them in the same ballpark size as the largest sulfide edifices in the Pacific at the Endeavour Segment off the coast of Vancouver, Canada.

The other chimney fields at Alarcón Rise (Meyibó, Ja sít, and the newly discovered Pericú) stand directly on basalt near the fissure of the most recent lava flow at this ridge segment. Those chimneys are not as tall and many are inactive or waning in their activity. They seem to be driven just by the heat remaining in the cooling dike of that flow. In contrast, these off-axis vents appear to have greater longevity, possibly with a deeper, regional source of heat from the magma chamber under the ridge. 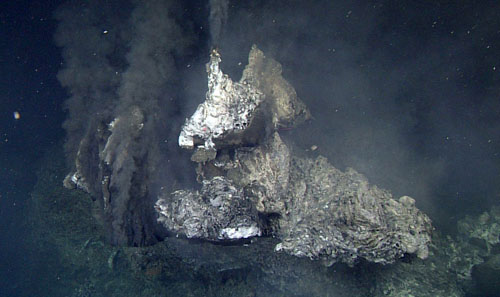 A sulfide flange sticks out toward the ROV at the top of an 18-meter-high black smoker in the newly discovered vent field at Alarcón Rise. Hot vent fluids are exiting the structure underneath this flange (as well as from a more classic chimney orifice at the top), ponding underneath, “waterfalling” upwards, and also building the flange outward as minerals precipitate from the fluid. 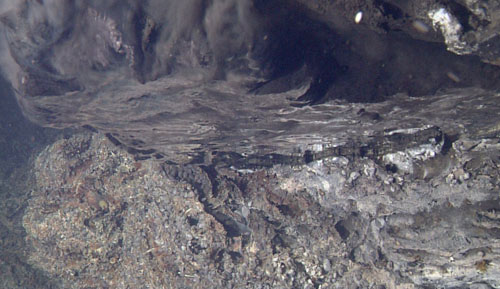 Close-up of an amazing and mesmerizing “upside down waterfall”, where vent fluid (355 degrees Celsius) is ponding and leaking upwards over the edge of the sulfide flange shown in the image above. The shiny surface of the pond at center is the reflection off the interface between the lower density, hot vent fluid and the cold seawater. Just millimeters below the interface the temperature is 2 degrees Celsius, the ambient temperature at this depth (2,249 meters). The surface is rippling as new fluids are injected into the pond. Just above the “waterfall” the “black smoke” is sulfide mineral particles precipitating from the vent fluid as it cools. This site is high on the 18-meter-tall hydrothermal vent chimney pictured in the image above. 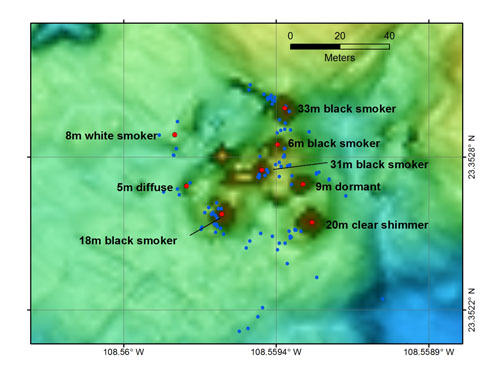 Map of the newly discovered vent field on the west flank of Alarcón Rise. The field will be named “Tzab-ek”, the Mayan name for the Pleiades star cluster, because they look like the “Seven Sisters” to us. Our real-time GIS allows us to locate the current position of the ROV on the bathymetry map though we can’t see more than a few meters in front of the ROV at times due to the clouds of sulfide particles in the water.

Florian Neumann writes: Hydrothermal vents are one of the strangest environments in the deep sea. The goal of this dive was to investigate and to explore a new vent field. Hydrothermal vents are conduits through which hot water is expelled to the seafloor, giving rise to complex communities of organisms that are unique to this environment. Black smokers emit clouds of black, sulfur-bearing minerals that had been dissolved in the hottest fluids; white smokers emit lighter-hued minerals such as barite and silica; and clear shimmering vents emit more diffuse flows of lower temperature, clear fluids. Words like “Wow!” or phrases like “Never seen that before!” sounded throughout the ROV control room by both pilots and scientists. At this time, at least for me, this and the previous vent dive were the most exciting dives on this leg. 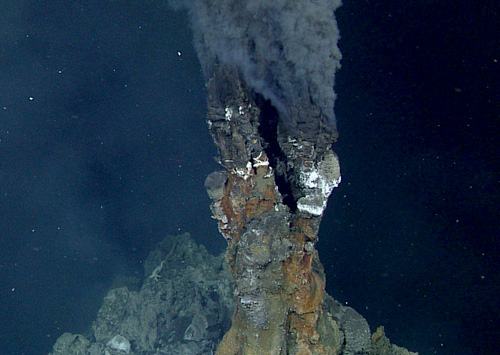 Black smoker with characteristic heavy metal sulfide that appears as “smoke” above the complex vent orifice at the top of this chimney. 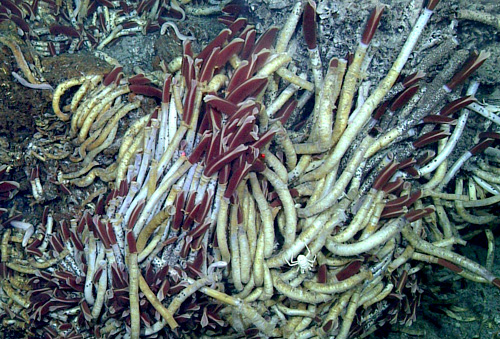 Jenny Paduan writes: After we tore ourselves away from the chimneys, we traversed the western side of the ridge axis toward the fissure system of the youngest flow on the Alarcón Rise. The fissure system is over eight kilometers long. A vast sheet flow erupted from this fissure and flooded the ridge from wall to wall of the axial valley. It is a much larger flow than any of the recent flows on the Juan de Fuca and Gorda Ridges in the Pacific Northwest, and is on par with large flows observed farther south on the East Pacific Rise, which has the fastest spreading rates of the Earth’s spreading ridge system.

The ridge crest in this part of Alarcón Rise has a broad shallow bulge, inflated by the heat of a robust magmatic system. We don’t know how long this area has been erupting at such high effusive rate flows or how often it erupts. We are collecting lava samples to see if and how the lava chemistry has changed and how many different compositions (individual flows) might be represented. We are collecting sediment cores to date the underlying flows. 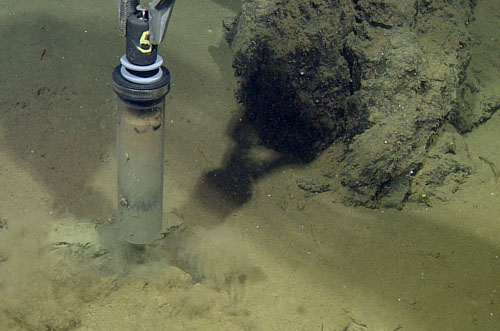 Push core is taken of sediments on top of a lava flow. We will extrude the core and sieve out the foraminifera shells at the bottom of the core for radiocarbon dating. This sample would be the first sediment to have accumulated on the flow, and its age will give us a minimum age of the flow. 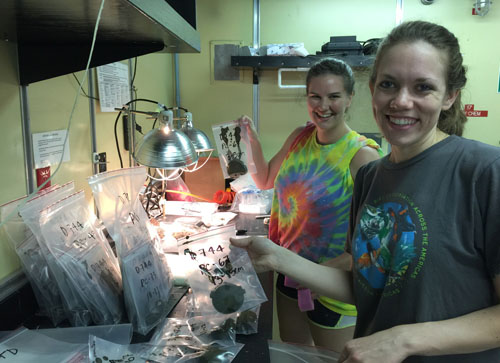 Chrissy Maschmeyer and Abbie Johnson holding baggies with two-centimeter slices of sediment extruded from push cores taken yesterday. We will sieve the bottommost interval of each core and pick out the tiny foraminifera shells for radiocarbon dating. 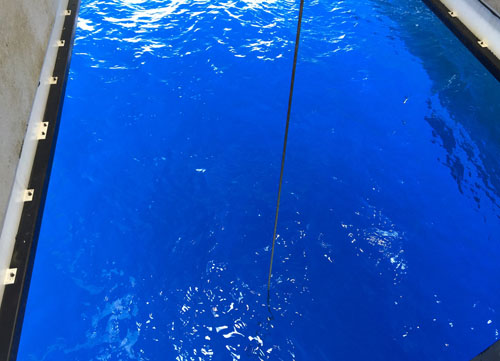 Looking down into the blue, blue water of the open ocean through the moon pool in the middle of the R/V Western Flyer. The cable in the center is the ROV’s tether and leads down to the ROV Doc Ricketts working more than 2,300 meters below us.