Ronald Spelz writes: Today’s dive on the Alarcón Rise started in a newly discovered active hydrothermal field, a vent through which hot fluids emerge from the seafloor. The tall chimney edifices, along with their peculiar deep-sea inhabitants, and their jetting hot fluids, literally gave us a “very warm” welcome. We decided to officially name this hydrothermal site “Pericú”, honoring one of the ancient ethnic groups that inhabited the southern tip of the Baja California peninsula and its surrounding big islands (e.g., Cerralvo and Espíritu Santo).

Our prime objective today was to collect samples of the high-temperature hydrothermal fluids that are gushing from the chimneys, which are called black smokers because of the fine black sulfide mineral grains that crystallize from the fluids as they cool and appear as thick, black “smoke” rising from the chimneys. To do so we have to use special water bottles made of titanium, which doesn’t react chemically with the high-temperature acidic fluids. We analyze the chemical constituents of the water samples to quantify the heat characteristics of the earth’s deep interior beneath the southern Gulf of California. Look out for future cruise logs from Rob Zierenberg and me; we’ll be posting more exciting and detailed information on this important topic. 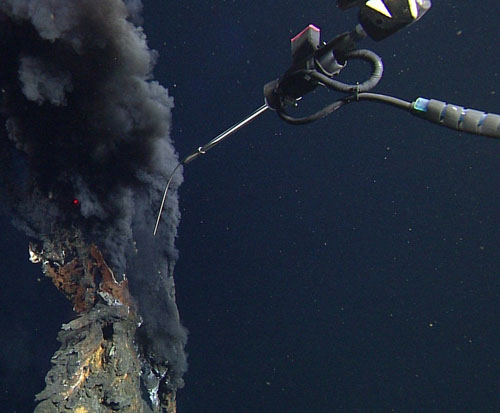 The tip of a high-temperature thermocouple probe is about to be inserted into the orifice of a black smoker. Temperatures of the spewing hydrothermal fluids exceeded 350 degrees Celsius (662 degrees Fahrenheit). 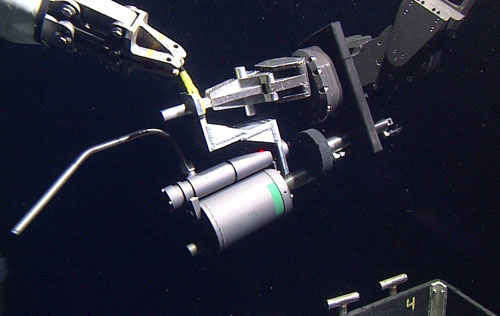 A sampler for collecting hot hydrothermal vent fluids is transferred from one manipulator arm’s grip to the other prior to sampling. The nozzle on the left will be inserted into the black smoker’s orifice. The trigger to draw in the sample is the hydraulic ram with the black circular plate attached below the manipulator’s “wrist” joint.

Lonny Lundsten writes: Today’s dive focused on exploring and sampling at the Meyibó hydrothermal vent field. Hydrothermal vents occur where hot mineral- and chemical-rich seawater spews from cracks in the seafloor. The venting seawater can be diffuse or it can be more focused. In the focused areas we see large chimneys form from minerals that precipitate when the hot water meets the surrounding, cold seawater. Some chimneys are more than 10 meters tall.

Biologically, hydrothermal vents are very interesting because chemicals in the hydrothermal vent water support a community of organisms that survive in the absence of photosynthesis. These so-called chemosynthetic communities thrive off of bacteria that use the chemical-rich vent water to drive a reaction that creates simple sugars. The chemical reaction is very similar to photosynthesis but energy stored in the molecular bonds of the chemicals drives the reaction in place of sunlight.

Organisms like Riftia pachyptila (giant hydrothermal vent tubeworms) and vesicomyid clams host these chemosynthetic bacteria within their guts. This symbiotic relationship provides a safe and stable home for the symbiont and a ready food supply for the host. In the case of Riftia pachyptila this relationship is obviously beneficial as the worms can grow to 1.5 meters tall and we find them in densities of greater than 2,000 per square meter!

Other members of the chemosynthetic community include vent fish called zoarcids (Thermarces cerberus), limpets, snails, galatheid and vent crabs (Bythograeidae), as well as scale, serpulid, and Pompeii polychaete worms. The crabs and fish have evolved to tolerate the high temperatures of the vents and take advantage of the plentiful invertebrates that rely on chemosynthetic symbionts. Some vent fauna thrive in areas of diffuse venting with lower temperatures while others, like Alvenellidae polychaete worms, also known as palm worms, thrive near the hottest of water. The vent crabs and fish can be seen darting and moving between the dense populations of worms and flowing hot water.

Much farther away from the venting we find populations of mushroom sponges (Caulophacus sp.), which cannot tolerate hot water, but likely feed on abundant bacteria thriving in the chemically enriched waters of the vent field. These sponges are filter feeders, filtering bacteria from the water as most sponges do. We also spotted some carnivorous sponges on inactive chimneys. These sponges are unique because rather than filtering food from the water column, carnivorous sponges use microscopic hooks to trap larger crustacean prey, such as copepods and amphipods, which are drifting past them in the currents. I like to use the analogy of a spider web to describe how they trap the prey: prey drifting past the sponges get stuck in their tiny hooks, much as a fly gets stuck in a spider’s sticky web.

The carnivorous sponges that we encountered today were a special treat for me because I described and named this species from specimens that we collected near hydrothermal vents during MBARI’s 2012 expedition to the Gulf of California. This species, Cladorhiza evae, is named after my wife Eve. It’s always a treat to see something that you were the first to describe and name, especially when it’s named after your wife! 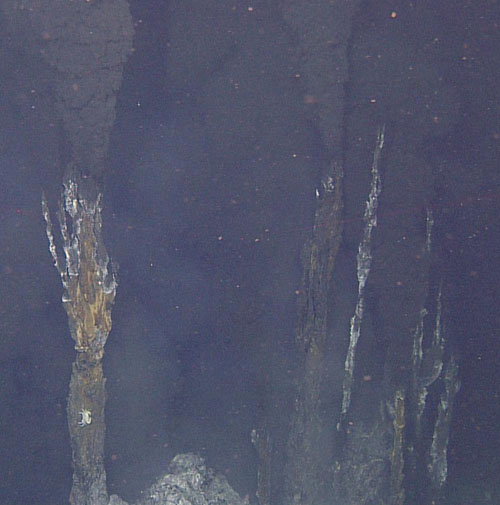 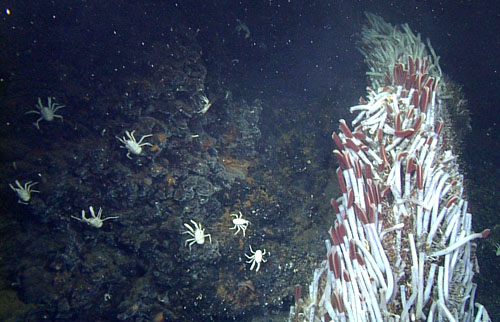 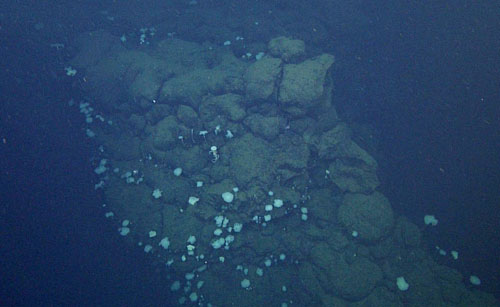 Abundant populations of mushroom sponges (Caulophacus sp.) are seen farther from the vents. 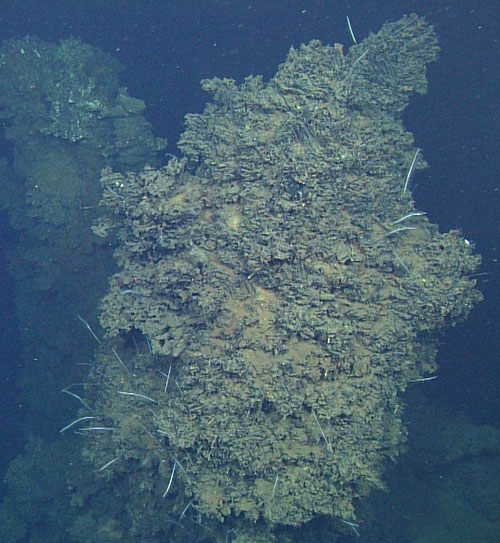 The white stalks seen on this inactive chimney are a species of carnivorous sponge, Cladorhiza evae, which were discovered and named by Lonny Lundsten on MBARI’s 2012 GOC expedition.