Brian Dreyer writes: A primary goal of today’s dive was to explore the extent of high-silica lava flows at Alarcón Rise. These flows are common on land volcanoes but rare at oceanic spreading centers—sites where two tectonic plates move away from one another. Most spreading centers erupt low-silica lava called basalt, which is hot when it erupts (approximately 1,100–1,200 degrees Celsius), and the flows are typically fluid. In contrast, rhyolite lava is significantly cooler (about 800 degrees Celsius), pasty, and thick, with high silica content. They often look quite different from basaltic flows.

The high-silica lava flows here were described in previous cruise logs by Ryan Portner and Chrissy Maschmeyer. It is widely thought that these rare rhyolites at spreading centers derive from basalt if unusually cool conditions persist in the shallow crust beneath the seafloor. However, while the causes of such cooler conditions are a topic of ongoing scientific discussion, the implications are clear—we can study rhyolite eruptions under the relatively controlled conditions afforded by high-pressure in the deep sea. Our observations provide a critical analog to rhyolite volcanoes on land that are frequently hazardous to human life and property and can perturb weather patterns and ecosystems for years.

The collection of rhyolites and basalts (and many other types of lava flows) at Alarcón Rise provides an excellent opportunity to evaluate existing hypotheses regarding rhyolite formation at spreading centers. A first step in this assessment, once rhyolitic flows are found, requires determining their ranges in terms of location, size, and age. A hallmark of spreading centers is intermittent volcanic eruption originating from along the ridge axis. Lava typically flows downhill away from the axis. This constant “repaving” of the spreading center seafloor can be an obstacle in reconstructing the complete volcanic history of the area.

To illustrate, we would like to determine if rhyolite production is so rare at spreading centers that any earlier rhyolite eruption is now buried by subsequent basaltic eruptions. If so, then older rhyolite is “hidden” from view and the overall abundance of rhyolite would be underestimated. Knowing the proportion of rhyolite helps understand its significance in how oceanic crust is formed and its role in the spreading center “conveyor-belt”.

Based on our analyses of the bathymetric maps and lava and sediment samples from our 2012 expedition, we now have clues that high-silica lavas may have erupted here during at least two different time periods. Preliminary work suggests that the rhyolite dome discovered in 2012 is roughly 25,000 years old.

Two dives ago we visited another mound of probable rhyolite that lies further off-axis than the rhyolite dome. We will test our hypothesis that this flow is older by using radiocarbon analyses of microfossils that we collected directly above the flow with long push cores from the ROV Doc Ricketts. We will soon have an age constraint for this high-silica flow and for dozens of flows with more common compositions. These data will allow us to piece together the volcanic history of Alarcón Rise and better understand how this section of ocean floor illuminates a fundamental geological process. 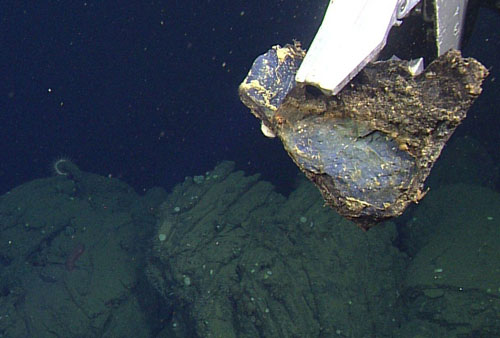 The manipulator arm holds a sample from “bread crust”-like pillows, with iron-oxidation on the outside and a noticeable blue cast on freshly broken surfaces. These characteristics lead us to suspect that this is a high-silica lava. 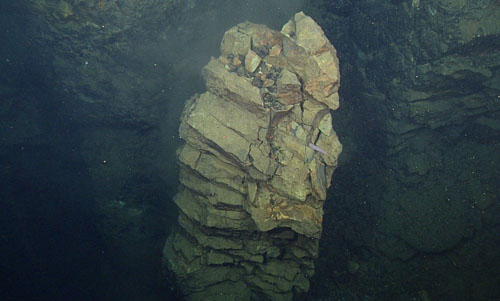 A column of magma intruded into the crust and cooled slowly after it was emplaced. It has been exposed and peeled away from the wall through subsequent tectonic rifting and erosion. 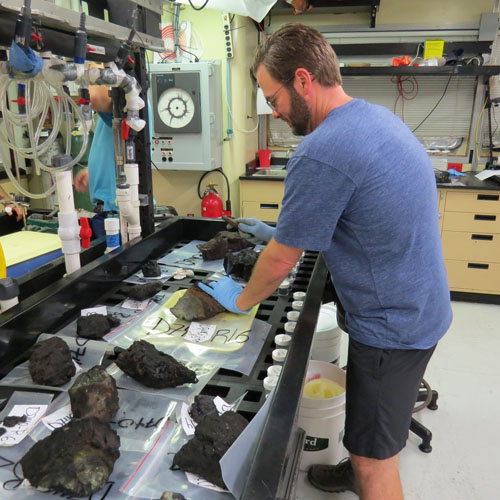 Brian Dreyer chips glass from our lava samples. The glass chips will be made into thin sections (glued to microscope slides and polished to a thin slice) for analysis of the chemical composition by electron microprobe back on shore. 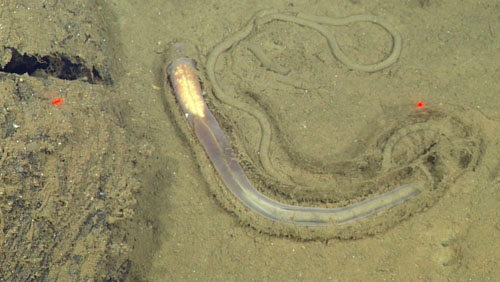 This worm is an enteropneust, or acorn worm. It digests the organic material off sediment (you can see the sediment inside its gut), and leaves a trail of leftover sediment behind. The light-colored mass at the other end contains reproductive material. The red laser dots are 29 centimeters apart for scale.