A full day’s dive in volcano of Alarcón Seamounts

Jenny Paduan writes: The R/V Western Flyer departed last evening from Pichilingue Harbor near La Paz, Mexico. The weather was clear and warm and the sea was smooth as glass. We steamed through the night and arrived in time to do a full day’s ROV dive on the eastern-most volcano of the Alarcón Seamounts. 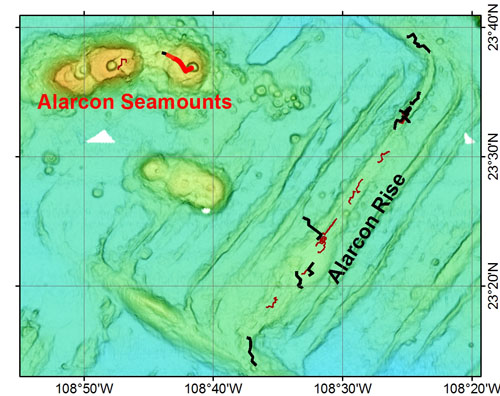 Map of Alarcón Seamounts and Alarcón Rise. The track of today’s ROV dive is in red, planned dives for this expedition are in black, and previous dive tracks are brown.

The dive began inside the 300-meter deep caldera of the volcano at a depth of 1,825 meters. Our priority here was to collect sediment that has accumulated on the caldera floor over time, as the caldera acts as a very effective sediment trap, preserving layers of sediment raining down from the sea surface over long periods of time. Our paleontologist colleagues will then analyze tiny marine animal shells, or foraminerifera, which have been deposited with the sediment. Past climate can be inferred from chemical analysis of the foraminifera shells. 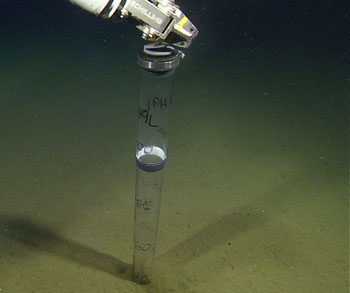 Taking a long push core of the sediments for its record of climate change over the past millennia. This core tube has been pushed in about 40 centimeters. We have successfully collected two completely full cores over 100 centimeters long!

The ROV ascended the wall of the caldera to its rim. Multiple lava flows that built the seamount are exposed in the caldera wall. At the very top, a thin deposit of volcaniclastic material (volcanic ash) is draped over the last lava flows from the volcano, testimony to the explosions it experienced as the flows ceased and the caldera collapsed. Further along we observed abundant, small growths of bacterial mats, which must be fueled by chemical-rich fluids flowing from small cracks or holes in the seafloor; this suggests that the interior of the volcano is still cooling. 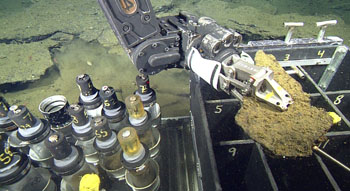 ROV Doc Ricketts’ manipulator arm collecting a slab of the solidified volcanic ash deposit on the rim of the caldera at Alarcón Seamount. 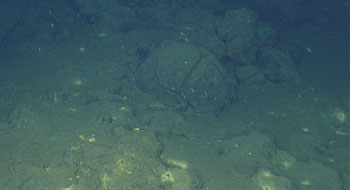 Yellow bacterial mat surrounds small cracks in the lavas at the caldera rim. While this seamount is probably hundreds of thousands, if not millions, of years old, fluids being heated by the volcano as it slowly cools are still circulating through cracks in the seafloor, feeding these chemosynthetic bacteria. 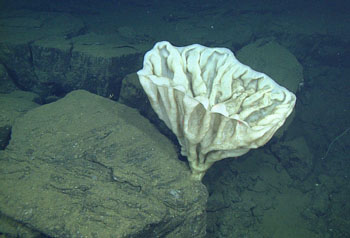 A fluted vase sponge is attached to a thick lava flow that had been cracked by a later lava intrusion from underneath. 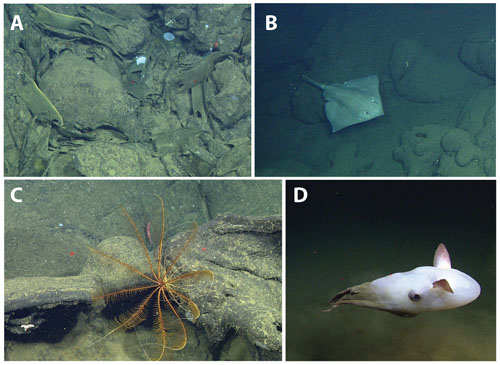 Montage of some animals seen on today’s dive. A: Dark, empty skate egg cases lie in great abundance on the seafloor and newly laid, yellow ones were seen nearby. This site has obviously been used as a skate nursery for a long time. B: An adult skate. C: A crinoid (feather star) clings to a lava flow (red laser dots are 29 centimeters apart for scale). D: A large finned octopod swims past the ROV.

Ronald Spelz writes: “Safety is our number one priority”, said the Western Flyer’s chief mate when we gathered in the wet lab during a mandatory safety briefing session. As soon as we heard these words, everyone nodded their heads and silently acknowledged that being out here on the ocean involves certain risks, and that in order to minimize these risks we all need to know the fundamentals of what to do and how to do it.

Scientists and crew members onboard the Western Flyer, no matter what, have to work hand-in-hand to assure that safety standards and regulations are met during all our operations, whether these are performed during transit, at dive sites, or even in port. Safety measures vary from the ordinary, such as wearing the proper safety equipment or staying clear during ROV and equipment launches and ensuring the functionality of the Western Flyer’s sanitation system, to the extraordinary, such as those to be performed during a fire or other emergency situation.

What we do scientifically is important, but doing it safely is vital! 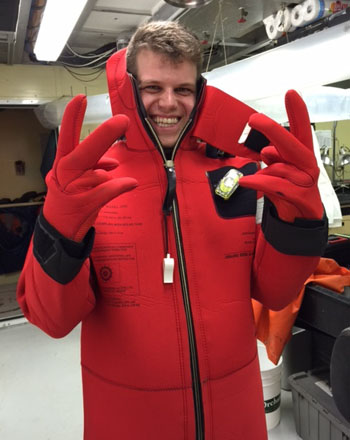 The safety training required to sail on the R/V Western Flyer includes learning how to don an immersion survival suit. Despite relatively warm water temperatures in the Gulf of California, being in the water for a long period of time could still lead to hypothermia. Florian Neuman is a Ph.D. student at Centro de Investigación Científica y de Educación Superior de Ensenada and Universidad Autónoma de Baja California. 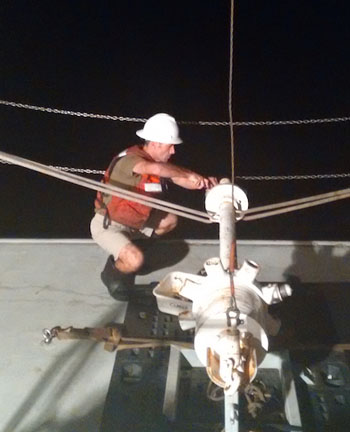 The wax-tipped corer is used to collect volcanic glass samples from the bottom of the ocean. It is an example of how safety and scientific goals go hand in hand. The corer weighs about 200 kilograms and requires working close to the stern of the ship, so a helmet, steel-toed boots, and a life vest must be worn. The picture shows Ronald Spelz securing the wax cups to the end of the sampler.