I knew it was going to be a good day when Eric made eggs benedict for breakfast. Today was a very interesting day geologically and biologically. We made two dives on either side of a giant fault. Once again, we tried to dive in locations where the sedimentary layers appeared to outcrop onto the seafloor based on the high-resolution multibeam maps from the autonomous underwater vehicle (AUV) D. Allan B. We are trying to get samples of the outcrops on both sides of the fault. We should be able to date the sediments and reconstruct the evolution of the seafloor.

One of the most exciting moments was when we finally collected some clams! These are a species of the genus Vesicomya. They are big, fat, beautiful clams that inhabit cold seeps, which are a slow source of chemical energy (in this case sulfide) leaking out of the sediment. We also tried to take sulfide measurements at the surface of the mud with the in situ ultraviolet spectrophotometer (ISUS) probe, but didn’t detect any.

The clams, which were slightly buried, indicated that there was some sulfide just below the surface and so we took push cores around where they were living. Once we extruded the mud from the push core our noses told us this was a good spot! Sulfide smells a little like rotten eggs and we all could detect that! 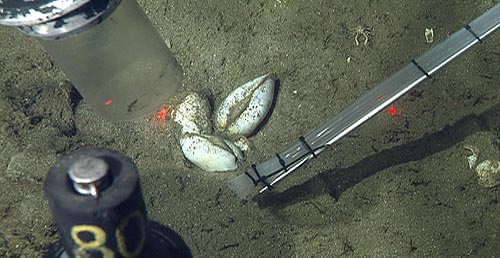 Deep-sea clams with suction sampler (upper left), push core (lower left), and intake for sulfide sampler (thin plastic tube). The red dots are from lasers on the ROV and help us tell how big things are in the videos.

The clams house chemosynthetic bacteria that consume sulfide. A clam will stick its big foot deep into the sediment where concentrations of the sulfide are higher, and slip its siphon out of the mud to take in oxygenated water. It then pump water across its gills, which are huge and full of bacteria. The bacteria use the sulfide and oxygen to feed the clam.

These clams are interesting to us both ecologically and evolutionarily. There are several species ofVesicomya in the Gulf of California, and we are hoping to collect all of them so we can complete a molecular phylogeny of these interesting animals. From this phylogeny we will learn how these amazing animals have evolved to inhabit seeps and how they are related to one another. The Gulf of California is interesting ecologically because it contains so many species in such a diverse geological environment. 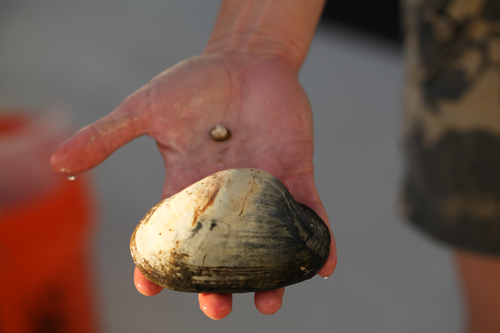 One of the clams that we brought to the surface.

At a second site we saw some beautiful carbonate outcrops covered with deep-sea corals, seapens, and huge white vase sponges. These carbonate layers are chemical precipitates that formed at an old, but now exposed, transition between the oxidation zone in the sediment and a reducing zone below.

At this transition, methane produced by methanogenic bacteria consuming organic matter combines with sulfate present in the pore waters and produces sulfides and bicarbonate. The increase in concentration of bicarbonate leads to precipitation of calcium carbonate. When bottom currents erode the soft sediment above this carbonate deposit, the massive carbonates are exposed. The carbonate outcrops are a record of a past chemical transition within the sediment. 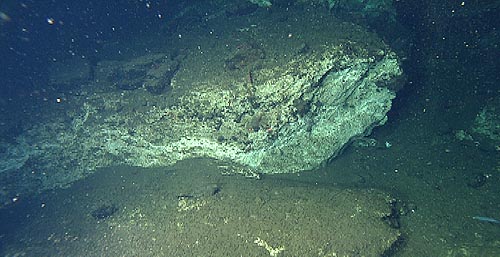 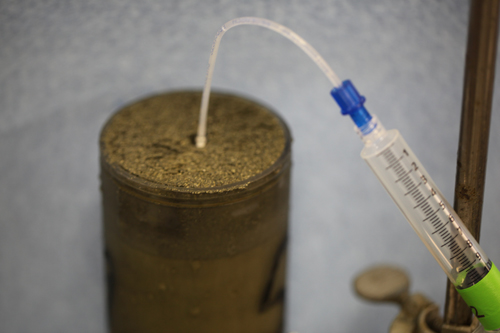 Extracting pore water from a push core to measure methane and sulfate. Here we are using the “route of desperation” method. Usually we use a tool that squeezes water from the mud. This sediment in this core was sandy and you can’t “squeeze sand.” Instead we used a vacuum created by the syringe to draw the water out. 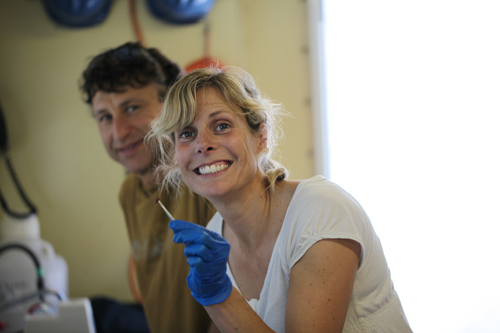 Shannon Johnson and Roberto Gwiazda working on samples in the wet lab. 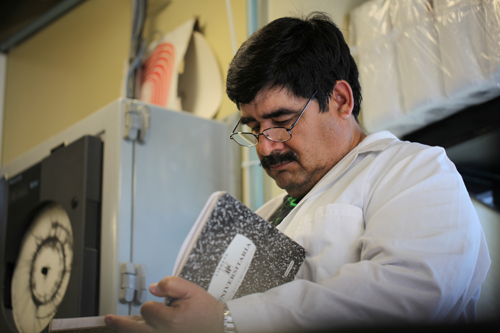