Day 4: Learning from the mud

What can you learn from a dead, single-celled organism buried in deep-sea mud? Almost everything!

Today we had two remotely operated vehicle (ROV) dives in the same general area as yesterday. We wanted to explore and sample farther along the fault so we can continue to verify the autonomous underwater vehicle (AUV) mapping data collected by our colleagues on the R/VZephyr. We collected three largely different rock types that do not match across the fault. It is very difficult to determine rock types from the AUV’s very high-resolution bathymetric data. Therefore, it was critical to sample rocks and mud to determine how the material changes across the fault. Our findings today indeed helped us verify fault location and movement. 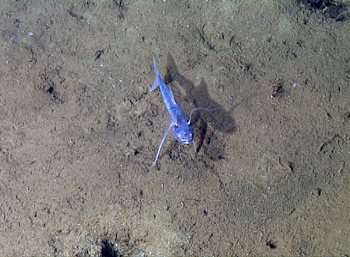 We saw quite a few tripodfish on the dives today, which is a rare treat for us because we don’t see them in the Monterey Bay region. They have long extensions of their fin rays that allow them to stand on the seafloor and wait for prey to swim by.

We have quite a few collaborators joining us on this leg of the expedition. Juan Carlos Herguera and Mary McGann are interested in organisms called foraminifera—”forams” for short. Forams are among the most common marine plankton species. They typically produce a shell made of calcium carbonate (CaCO3) and can range in size from tenths of a millimeter to a few centimeters. The two scientists are busy finding living forams in the push core samples, which Mary is classifying according to their morphology. 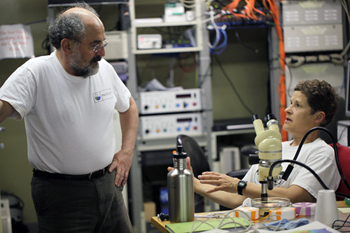 Juan Carlos Herguera and Mary McGann discuss their findings from the cores.

One of their goals is to characterize the species composition of these organisms that have adapted to the deep seafloor conditions in the Gulf of California. Here, forams have to balance the very high amount of food raining from the surface ocean and the very low oxygen concentrations at these depths. Juan Carlos and Mary will also send specimens out to a lab for DNA fingerprinting, so they can later use the DNA information to characterize foram communities in other oxygen minimum regions, and to understand how these organisms cope with these extreme conditions.

This is particularly interesting as the oxygen minimum zone has been observed to be expanding, consistent with ocean acidification. These population studies will provide us with a baseline to help determine whether forams are also expanding into shallower depths along with the oxygen minimum. To our knowledge, this would be the first DNA fingerprinting study on benthic forams in the Gulf of California or in the Northeast Pacific.

In addition to studying forams’ coping strategies in extreme conditions, Juan Carlos and Mary want to be able to use fossilized forams in the geologic record to reconstruct past environmental conditions. The Gulf of California is a large natural laboratory where diverse oceanographic and marine geological processes intersect. Geologic records can tell us about the ocean’s past experiments under different climate regimes. 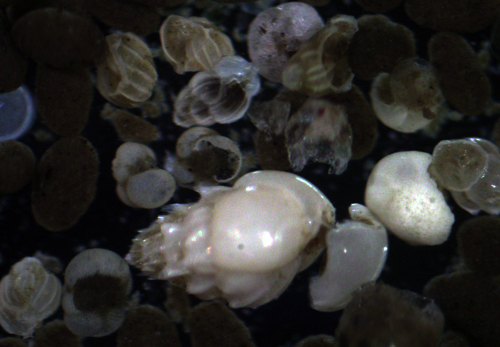 From this microscope image, you can see how forams come in a wide variety of shapes and sizes.

One of the many interesting experiments occurs in the surface waters of the gulf. Seawater temperatures are highly variable in the northern part of the gulf on a seasonal basis, however, they vary little in the south. Due to this difference, which affects the way nutrients and chemicals are taken up by sediments and by forams, we would expect to see different communities from north to south which are adapted to these varying conditions.

Even more interesting, when forams are growing their shells out of calcium carbonate crystals—usually in a matter of days or weeks—they are using mostly the carbon dissolved in seawater along with tiny fractions of other metals dissolved in the seawater. Researchers have unraveled that more often than not these elements are absorbed into their shells in proportions that depend on the environmental conditions when they grew. This means that if we can measure their enrichments precisely, we can decipher how to read them in terms of temperature, salinity, nutrients, and oxygen concentrations at the time the forams were growing their shells. Since they are often preserved in the geological record, we have the fascinating opportunity to reconstruct those important variables for the past history of the ocean. Before we do that, we have to observe how accurate these foraminiferal sensors are in the present ocean. Later, we’ll talk more on what they tell us on the past. 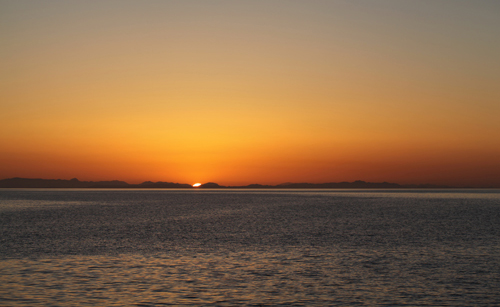 Another beautiful sunset on the Sea of Cortez. Much of the science party took a break from core processing to enjoy this sunset, and we were rewarded with an elusive green flash! 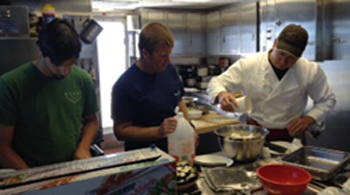 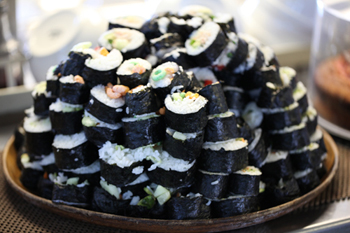