Today we made two dives on either side of one of the faults that intersects the Gulf of California. We again collected vibracores and push cores.

We picked up rocks that were on both sides of the fault, confirming they had similar lithologies which suggested there was well over a kilometer offset of this feature. Each side of the fault had a very distinct lithology, separated by the trough. We collected a green volcanic rock covered in sponges and nereid and serpulid worms that probably came off the flank of the margin farther to the west. We also collected two beautiful deep-water limestones. Limestones are made up of skeletal remains of animals that have lived and died in the oceans and are partly crystallized pelagic sediments. 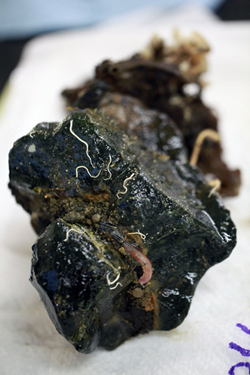 Rock sampled on one side of the fault.

The only reason we were able to sample these rocks is because the faulting exposed them. Because of their biological origin, we will be able to date these rocks and they will help us to infer the geological history of this region. One of most the interesting things is that no one knows what types of rocks are in the flanks of the fault zone; this area is largely unexplored. Geologists have used drop cores to collect a few previous samples, but sampling with the remotely operated vehicle (ROV) gives us a much more precise way to sample the topology of the seafloor. 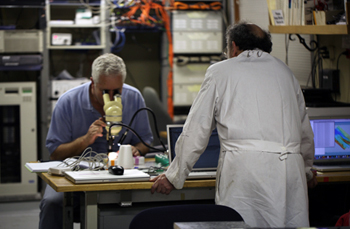 Charlie Paull looks at a limestone rock under the microscope while Juan Carlos Herguera looks on.

The sediment at these sites was also strange in that we were unable to take any complete vibracores. Most cores only penetrated about a meter before the stiff mud stopped the core from going any deeper. During the core processing, we found muddy aggregates in the smaller push cores. Once sieved, these aggregates appeared similar to the rock we collected and didn’t disintegrate even when we used the sonicator—a tool that uses sound energy to disrupt or agitate particles—to break it up. This is very different from the softer sediments we collected at the other sites. 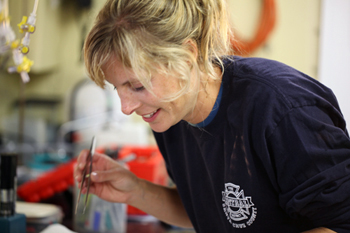 One of the rocks we collected had beautiful lamini (layers of sediments). Tomorrow we will return to the site to find where the deeper sedimentary layers outcrop onto the seafloor and try to get a core into one of these outcropped layers.

On the descent of our second dive we happened upon Vampyroteuthis infernalis, or the vampire squid. This animal is not only cool looking, but also interesting because it is a living ancestor to both squid and octopus. These animals are known for living in the oxygen minimum zone (OMZ) and are typically found in the Monterey Bay around 500 meters (1,620 feet) depth—the OMZ in the Monterey Bay is around 500-700 meters depth. Today, the “vamp” we encountered was at nearly 1,100 meters (3,600 feet). This is probably due to the much wider OMZ found in the Gulf of California, which extends from about 400-1,100 meters depth. 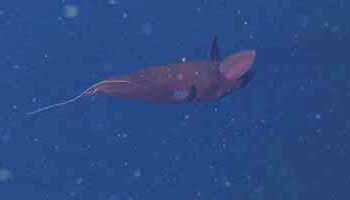 It was fun transiting along the fault; it was covered by deep-sea corals, anemones, brittle stars, and seapens. Bonus: it was geologically interesting! 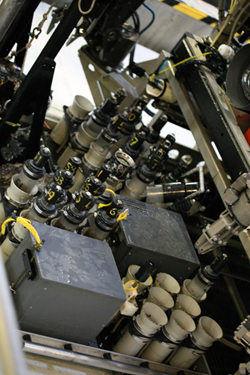 The push cores are lined up in their quivers and ready for the next dive. 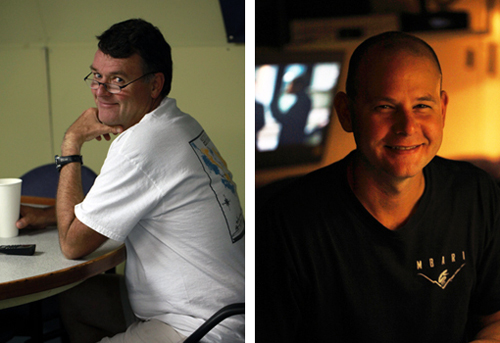 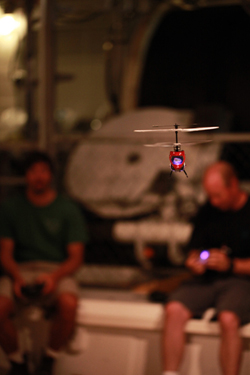 In their off time, the ROV pilots hone their flying skills with remote controlled helicopters in the moon pool. 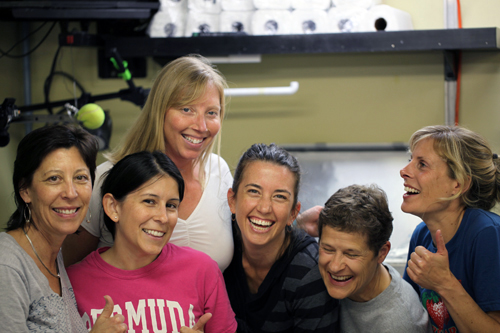