The expedition is now more than halfway completed and the R/V Western Flyer is once again transiting north through the Gulf of California from La Paz. While the previous legs focused on midwater and benthic biology and marine chemistry, this leg will primarily focus on the faults and seeps along the transform fault line where two major plates meet—the North American and Pacific Plates. We are also interested in the chemosynthetic organisms—animals that live off of chemicals in the seep fluids—that inhabit these areas, as they are important and conspicuous components of the deep-sea ecosystem. 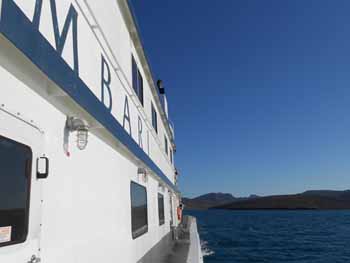 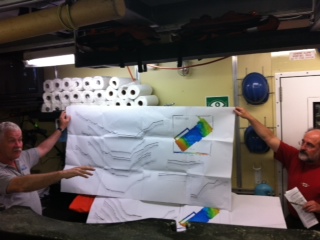 Charlie Paull (assisted by Mexican observer Juan Carlos Herguera) discusses the objectives of today’s dive, which is to collect samples from both the North American and Pacific Plates. 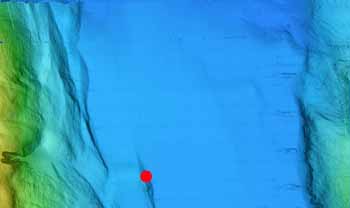 This map was created from the AUV multibeam mapping data we received from the R/V Zephyr, also currently working in the gulf. The first dive is located at the southern-most site for this leg in the Farallon Basin about 100 kilometers (62 miles) north of La Paz. The dive target (indicated by the red dot) is a small ridge formed on one of the faults that make up the transform fault between the North American Pacific Plates.

It appears from the sediment structure of core samples of the seafloor we collected today that sedimentation in this area of the Gulf of California consists of a steady, fine-grain accumulation punctuated by occasional layers of coarser sediments deposited in submarine landslide events.

While processing our vibracores, we found a four-centimeter-thick sand horizon 13 centimeters deep in the seafloor. We suspect that this sand layer is a turbidite-like deposit triggered by a large earthquake. In order to identify the age of this event, we will sample the sediment above and below this layer to measure carbon-14 ages, and thus constrain the potential timing of the last major seismic episode in this area. However, the possibility that these layers were the result of massive river discharges driven by extreme climatic events, such as hurricanes, cannot be discarded. 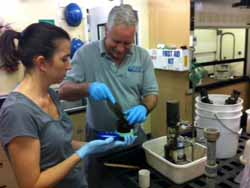 Research Technician Eve Lundsten assists Charlie Paull with core sampling for DDT evidence. Scientists now use DDT as an age marker since it was mainly used during the 1940s and 1950s, but was outlawed in the 1960s. 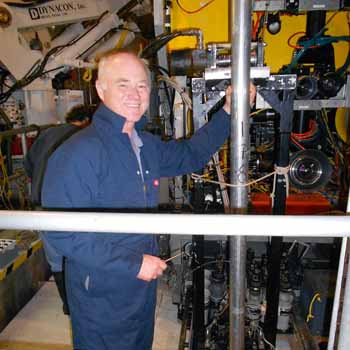 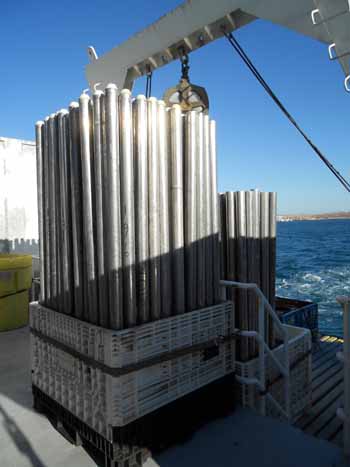 Cores on deck: 140 empty vibracore tubes are secured to the aft deck. The tubes are numbered serially from the time the vibracores were first used with the system.

Tomorrow we will explore another fault line nearby and will continue piecing together the evidence we collect to make a good inference as to when the last major event occurred in this area.