Day 7: Between a rock and a hard place

While this week’s news reports are filled with stories about James Cameron heading to the bottom of the Mariana Trench, the deepest spot in the ocean, we at MBARI continue with our day-in, day-out study of the deep sea. When you spend a lot of time watching the images coming back from the cameras on the remotely operated vehicle (ROV), you can sometimes lose sight of just how amazing this all is. Most of us on the ship have done this before, many have been going to sea or working with seafloor video for decades. But we are aware that we are often visiting places nobody has ever seen before, such as most of the locations we visited on this cruise.

Based on maps, both older, low-resolution maps and the new, amazing, high-resolution maps produced by MBARI’s own autonomous underwater vehicle, ocean chemist Peter Brewer and marine geologist Charlie Paull picked out the sites where fluid venting was most likely. That’s why we have been searching on spreading seafloor valleys—spots where tectonic plates are slipping—and on mounds, slumps, and seamounts. They all look promising when looking at bathymetry, but until we take the cameras and instruments down there, we are never sure.

Maps help identify possible locations of gas venting, then while exploring, the ROV sonar often helps locate the vents. In this sonar image from yesterday, the two blue streaks at the bottom indicate there were two vents behind the vehicle.

One seamount and one slump at the edge of the continental margin attracted our attention today. Like yesterday, some of the terrain kept us riveted to the video monitors. But unlike yesterday, there were no signs of gas venting; no bubbles rising up from the seafloor. The two sites were 16 kilometers (10 miles) apart, necessitating the recovery of the ROV between the two sites and a second dive. What we found were pillow basalt from a long-ago volcano, rubble fields of volcanic rock, and steep cliffs as high as 140 meters (460 feet). We found a large collection of egg cases (probably from sharks), sponges, sea stars, octopus, and fish. 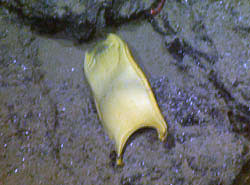 The seamount we visited in the morning was littered with egg cases, probably from sharks. Unfortunately, we did not see any sharks on this dive.

Two frame grabs from the ROV video camera as we explored around a seamount covered in pillow lava and fields of basalt rubble.

We did stop and take some Raman measurements with the pore-water probe since we were down there anyway, but we did not see any significant chemical signal. On the bright side, the Brewer team was recognized today by a writer for the Society for Applied Spectroscopy. “Potentially one of the more important review articles we have published,” the society’s blogger wrote, regarding a just-published Brewer-team paper describing how it uses the laser Raman spectrometer in the deep sea to accurately measure methane and sulfur in pore water. Always nice to be recognized by one’s peers!

As you can see from the list of researchers on the right side of this page, we have two Mexican chemists with us on this cruise, Martín Hernández Ayón and Gabriela Cervantes.

From Martín Hernández Ayón: At the end of 2008, I received an email from Dr. Brewer inviting me to participate in the Gulf of California Expedition as a part of his team. But it wasn’t until May 2009 when I met Peter for the first time at MBARI during my visit to Francisco Chavez’s lab that we had the opportunity to talk about the topic and the concerns for this cruise. At the beginning of 2010 Peter and I both attended a meeting of the Intergovernmental Panel on Climate Change (IPCC) in Okinawa, Japan, and we had time for an update and to make plans for geochemistry studies using Raman spectroscopy with the ROV on the new gulf expedition. My interest in the gulf exploration was not only for the area, but also because MBARI is, in my opinion, an oceanic NASA, which has very advanced technology to explore the ocean and answer questions on issues such as hydrothermal and methane vents. This experience with Peter Brewer and his team is a unique opportunity for my undergraduate student Gabriela and me, because we are able to witness what we learn only in books, scientific papers, or films. We recognize the efforts of MBARI for their mission, and we also are very pleased to open the door on collaborations with researchers and students from other countries. 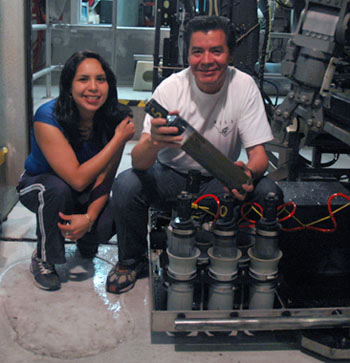 Gabriela Cervantes and Martín Hernández Ayón with one of the push-core sediment samplers they took off the remotely operated vehicle. The two have had a few such mud samples to process every night; they carefully separate out sections of the core for later testing for trace metals.