Today’s dive covered a wide diversity of terrain and sea life. Left, brisingid seastars cling to a cliff, and right, an aggregation of gastropods (snails).

Today, the science team covered a lot of fascinating territory at a fracture zone, where two tectonic plates meet—the Pacific Plate is slowly sliding north relative to the North American Plate. Large boulders, rubble, cliffs, a variety of animals; if the same territory was on dry land, it would be as beautiful as a national park.

When the Peter Brewer and Charlie Paull lab teams visited this same area in 2003, they found one active methane gas vent. Today, after locating the pink marker they left behind at the site, we found several such vents, with steady streams of bubbles rising from the seafloor and easily seen on sonar 400 meters (1,312 feet) above the seafloor. Those vents were sure to provide a chemical signal, but they could also freeze into a solid hydrate and block the intake of the laser Raman system, so we went exploring for other signs of chemical activity in the area rather than stop to take any measurements right away.

The Raman pore-water probe was inserted into the middle of a bacteria mat. No sign of methane. Then it was inserted into a dense field of vesicomyid clams, which are known to live at seafloor vents. No sign of methane. What was going on? It could have been because the sticky clay just beneath the surface forced the methane into a thin layer which was then consumed by the bacteria and clams.

For the first time, the team had a new map of the area prepared just two days ago by the MBARI AUV mapping team; the map was used as the basis for exploration. Unusual looking mounds and pits seen on the maps were explored and found to be amazing fields of huge calcium carbonate boulders and slabs.

By mid-afternoon, knowing the day’s dive would soon end, we returned to the bubbling vent and inserted the Raman probe. Finally, a strong methane signal was detected. The tip was inserted step by step into the sediment, until the methane started turning into hydrate—an ice-like cage that forms around the gas when exposed to the cold seawater at depth—and clogged up the line. That marked the end of pore-water measurements for the day. The line would clear when the equipment came up to the warmer water with less pressure, but we didn’t have time to bring the vehicle up to clear the line and go back down again.

The final step at the site of the gas vent involved scraping away some of the sediments with the “benthic hoe.” As soon as the mud was disturbed, pieces of solid methane hydrate were released and started rising up. As the methane gas traveled through the sediment it created a sort of chimney, which then became lined with the solid hydrate.

Peter Brewer said he considers himself lucky to have the support of his two key assistants, Research Specialist Ed Peltzer and Research Technician Peter Walz. “They are super guys,” Brewer said. “They did a great job today.”

Other MBARI employees are also unsung heroes in the success of this ocean chemistry expedition. These are the people who design and fabricate the tools we take to sea. Machine Shop Supervisor Ray Thompson figured out how to drill a tiny hole (2.03 millimeters, or .080 of an inch) down the center of the 1.27 centimeter (half-inch) diameter titanium probe, then did the masterful machining of the various threaded pieces. The new titanium tip is 55 centimeters (21.6 inches)—the old one was 30 centimeters (12 inches)—allowing us to sample fluids deeper in the sediments, and is strong enough to penetrate through carbonates. Mechanical Engineer Farley Shane designed the tripod and Mechanical Technician Frank Flores welded it. This tripod has allowed much more precise control and insertion of the pore-water probe. None of these MBARI staff members typically come out to sea to witness their work in action, but they are definitely much appreciated by the science team. 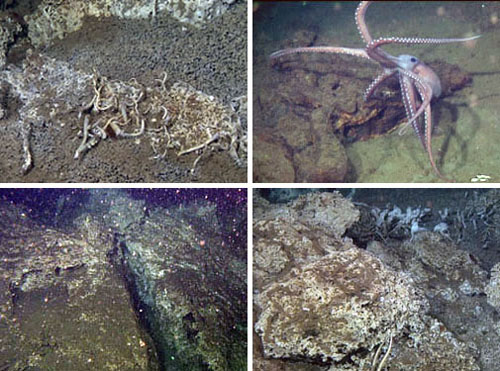 A few of the other sights found at a depth of about 1,570 meters (5,150 feet) in the Gulf of California. Clockwise from top left: tube worms, a benthoctopus putting on a little dance for the science visitors, carbonate mounds, and large rock formations.