Different territory, different chemical activity. We spent the last few days exploring in a valley where the seafloor is spreading and found sulfur venting from the cracks. Today we moved to a transform fault—a spot where tectonic activity created cracks in the sea floor at right angles to the spreading center—and found methane and cold seeps, in addition to sulfur.

Black mud, large fields of chemosynthetic clams, and fuzzy mats of bacteria are all signs that an area has chemicals venting from below. Today we saw all these indicators and stopped to take measurements of the chemical signals using the laser Raman spectrometer. When the Raman probe was inserted into the sediment in a field of live clams and returned a signal clearly showing methane in the pore water within the sediment, a cheer went up in the control room. It was a sure sign we found the target we’ve been looking for and that all the equipment was working as expected.

The laser Raman probe was inserted into fields of live clams, left, and a fissure lined with orange and white bacteria to determine which chemicals were present. Water passes before a focused laser beam in a tiny cavity; the light that bounces back indicates what chemical components are present.

The remotely operated vehicle was on the seafloor almost 10 hours today, allowing the science team to survey a large section of the transform fault zone, to search for the most interesting sites, and to gather water and sediment samples along with data, all to be analyzed in the lab later to paint a clearer picture of the chemical activity in the area. Methane gas is a primary fuel source and huge quantities are present on Earth; in the atmosphere it is a critical heat-trapping gas. But the vast majority of methane that leaks from the interior of the Earth to the seafloor is consumed by organisms before it can ever get out of the seafloor. This is one of the fundamental processes that hold our climate in balance. These seafloor observations of the microbes and higher animals that play key roles in this balance allow us to better understand the balance of Earth’s methane budget. 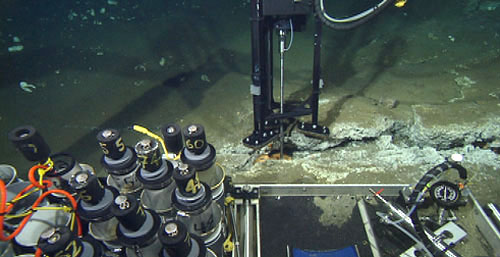 This view from the main camera on the remotely operated vehicle gives an idea of the various sampling tools carried to the seafloor to conduct chemistry studies. The laser Raman probe in a specially designed tripod with a hydraulic actuator sits above a fissure lined with white and orange bacteria. In the foreground, from left are the thermistor at the end of the orange cable, used to measure the temperature of venting fluids; push core tubes used to collect mud from the seafloor; and the pump and gauges used for the precise operation of the Raman spectrometer.

As mentioned earlier in these daily logs, two Ph.D. students from the University of California, Santa Cruz, have joined the science team for this cruise. The expedition offers them a rare opportunity to go to sea with an experienced team of scientists, and gives them a chance to collect data and samples for their own research projects. Here they explain the goals of their graduate research.

From Joe Murray: My work on this cruise is focused on studying the dynamics of the nitrogen cycle in the Gulf of California. I am specifically interested in the link between fertilizer run-off from farms in the Yaqui Valley and phytoplankton blooms in the gulf. The Yaqui Valley is a region of intense agriculture along the west coast of the Mexican mainland. Previous studies using ocean-color satellite measurements have shown a strong correlation between the timing of regional irrigation and large phytoplankton blooms off the coast of the Yaqui Valley. The implication is that a significant proportion of the fertilizer applied for farming is being transported to the ocean. The Gulf of California is naturally low in essential nutrients such as nitrate, so any inputs of nitrate, such as from fertilizers, has the potential to stimulate increases in phytoplankton growth.

These satellite observations of a potential relationship between fertilizer run-off and phytoplankton blooms have not been verified by direct measurements in the field. This cruise gives me an opportunity to sample the water, then to perform various geochemical measurements to see if run-off from the Yaqui Valley is indeed an important source of nutrients to this region of the Gulf of California. The most important measurement I will be utilizing is the nitrogen and oxygen isotopic composition of dissolved nitrate. Nitrate produced from different sources have very slightly different nitrogen and oxygen isotope ratios, which means they have a slightly different chemical signature. Nitrate produced for use as fertilizer is isotopically distinct from nitrate upwelled from the deep ocean. Thus, by measuring the isotopic composition of nitrate towards shore and at depth in waters off the coast of the Yaqui Valley, I should be able to determine the relative importance of these different sources for phytoplankton growth in the area. 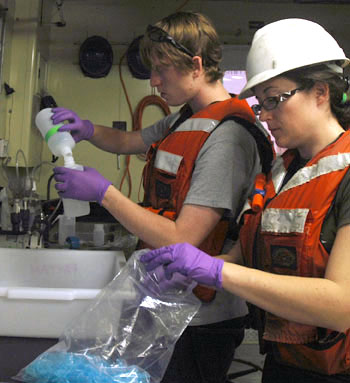 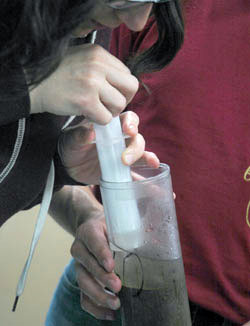 Abbey uses a syringe to extract the water sample from the top of the push-core sample.

While we may have hoped for bigger, hotter, denser fields of vents, the day’s discoveries were certainly rewards after exploring this seafloor valley northeast of La Paz. 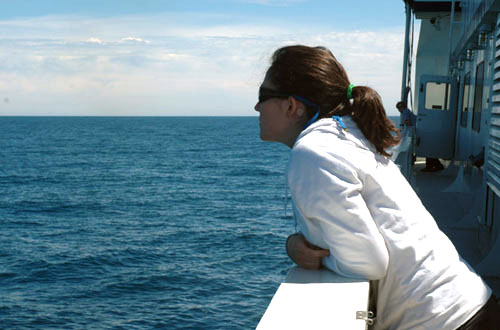 Abbey takes a break from the lab to watch a pod of pilot whales.