Day 4: Bacteria heaven on the seafloor

Persistence paid off today from searching an unexplored area of the sea floor with a beautiful outcrop covered with large patches of yellow bacteria-an indication of sulfur-laden water rising up from below. 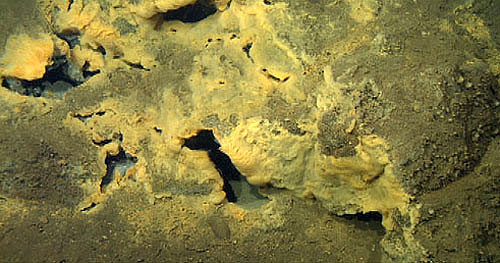 A close-up of a rocky ridge riddled with cracks and holes venting sulfur-laden warm fluids.

Returning today to the valley where we had seen the big yellow mass of pulsating bacteria two days ago, several more small vents were discovered. After several hours of exploring the slopes, Peter Brewer directed the pilots to fly the remotely operated vehicle a little further afield, to a spot where an old map showed a hint of a ridge. It took a while to get there, but we came upon the best discovery of the expedition so far.

A ridge of rocks and rubble was covered with yellow bacteria surrounding holes and cracks all throughout the ridge and along its base. Each of these holes was surrounded by mats of bacteria that thrive on the sulfur. The sulfur vents are an external sign of the volcanic activity below the seafloor. The valley we traversed beneath the Gulf of California is slowly spreading apart. As it does, cracks open up in the seafloor and cold seawater seeps in, reaching the hot volcanic activity below. The water comes back out of the same cracks hotter and carrying some of the chemicals present in the volcanic emissions below. 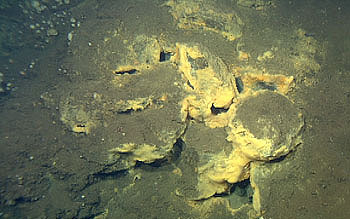 The ridge and rubble were bathed in sulfur-rich fluids, attracting bacteria that rely on chemosynthesis for energy. Unlike plants which rely on energy from the sun, chemosynthetic organisms convert chemicals, such as sulfur, to energy and do not need sunlight.

To check just how hot the venting fluids were, a thermistor was inserted into several of the crevices where shimmering water was visible. While the ambient seawater was about 2.5 degrees Celsius (37 degrees Fahrenheit), the venting fluids were as much as 5.9 degrees Celsius (42.6 degrees Fahrenheit). Not very hot, but certainly enough to indicate the volcanic activity below. 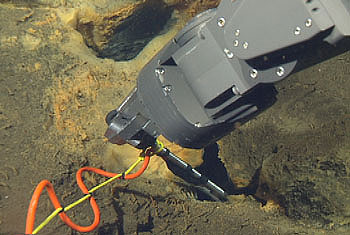 A thermistor is inserted into one of the fissures to measure the temperature of the venting fluids. They were clearly warmer than surrounding seawater, but not very hot. 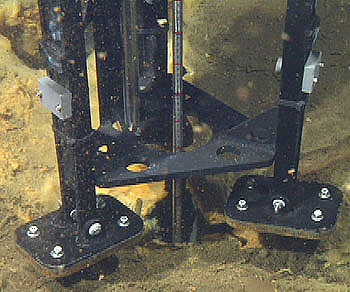 The team also successfully used the laser Raman spectrometer in some of the vents. The team “reached new lows” when it used a longer probe than ever before, enabling measurements of the chemical components as deep as 55 centimeters into the seafloor. The full analysis of the spectra obtained when the laser light scattered off the fluids will be carried out in the lab at a later date.

While we may have hoped for bigger, hotter, denser fields of vents, the day’s discoveries were certainly rewards after exploring this seafloor valley northeast of La Paz.

A special treat today was the chance to see a pod of pilot whales swimming around the ship.