Day 3: That’s why they call it exploration

The best of explorers set out for points unknown making an educated guess about what they might find, but being open to serendipitous discoveries. They must also be prepared for disappointment, to learn that although it is uncharted territory, it may not hold any interesting surprises. Such was the unfortunate result of today’s exploratory mission.

With a brand new high-resolution seafloor map just created by the MBARI AUV mapping team in hand, ocean chemist Peter Brewer and his team set out to explore with the remotely operated vehicle, armed with cameras, samplers, and chemical-sensing instruments. The new map showed an expansive flat spreading valley on the seafloor, with a marked tall mound smack in the middle. Brewer thought this large formation could indicate active fluid or gas venting.

However, after traversing the mound and several pockmarks dotting its surface, little of chemical interest turned up although their advanced sensing tools worked perfectly. The mound, which looked so impressive on a map was old and had spent its chemical stores long ago. Had our biologist colleagues been here, they would have found the scattering of sea cucumbers and brittle stars of greater interest. But for this group of chemists, it was not a particularly fruitful exploration.

Even the more challenging days are never a total loss. University of California, Santa Cruz, graduate students Joe Murray and Abbey Chrystal were given an opportunity to collect a series of water samples as part of a study of the possible nutrient run-off into the ocean from area agriculture. We’ll tell you more about Joe’s work tomorrow. 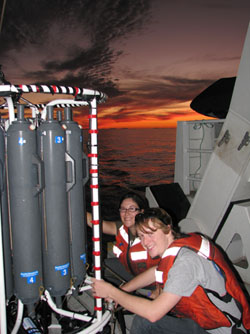 Abbey Chrystal and Joe Murray collect water samples from the bottles on the “CTD rosette”. The bottles collect water at different depths, allowing the researchers to get a profile of chemistry components in the water from the surface to a depth of 1,000 meters.

During the day’s dive, we were treated to some very interesting animals. Just as the ROV was on its way up to the surface, Chief Pilot Knute Brekke spotted a brooding gonatid squid and stopped so we could take a good look. This squid was swimming around with thousands of eggs in the sac extending behind it. 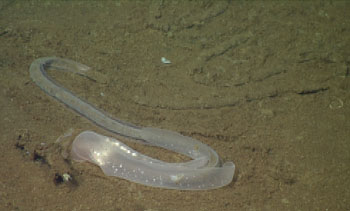 We also saw this odd enteropneust. MBARI researchers recently published a paper on these unusual animals that are genetically more like humans than the worms they resemble.