Day 1: Nothing ventured, nothing gained

One may not doubt that somehow good
Shall come of water and of mud
And sure the reverent eye must see
A purpose in liquidity.

After three days in port to refuel, switch out some crew members, and mobilize the next group of scientists and their equipment, the Western Flyer set sail from La Paz early this morning. The principal goal of the day was to transit to our group’s test site and conduct a brief test of a new piece of equipment before moving to our primary target.

Early in the day the team received the latest map created by our colleagues working with the autonomous underwater vehicle (AUV) D. Allan B. on the R/V Zephyr. The detail provided by this new map was stunning. Data gathered with the mapping AUV produces maps with details as small as one meter (3.3 feet) across. Previous maps available for this area provided no better resolution than 50 meters (164 feet).

The blurry image at the left is all that could be seen of a pit in the seafloor in maps previously created with sonar mounted on surface ships. The image at right shows the exact same area at the same size, created with data collected with MBARI’s mapping AUV yesterday. Note all the details not previously visible. At its widest spot, this pit is about one kilometer (3,280 feet) across.

As it turned out, the area covered by the new map was just a little bit deeper than this team’s equipment is rated for so it was not used to locate today’s work site.

Every year ocean chemist Peter Brewer and his group make improvements to their laser Raman spectrometer system to enhance its precision in measuring the chemistry of “pore water”—the water that occupies the space between seafloor sediment particles. One of the latest such efforts was the addition of a “liquid-core waveguide” which had proven in the lab to provide a much stronger signal of the chemical components in the pore water. The waveguide includes a coil of tubing; the laser is aimed to hit precisely within the tube, giving a longer sample of the water for the light to pass through, thereby amplifying the signal. By watching the Raman spectra—a graph constantly updated as the laser Raman system moved through the water—it would be obvious if the results were any better. Unfortunately, the high-definition reading did not materialize due to a micrometer-size mismatch in alignment that could not be fixed in the field.

Trying out new methods and instruments is part and parcel of MBARI’s mission. This liquid-core waveguide was worth testing out to see if it might augment our arsenal of tools to learn about the ocean and its mysteries. It didn’t pan out today, but the team learned a little more about what works, and will at some time in the near future have an opportunity to revise it. 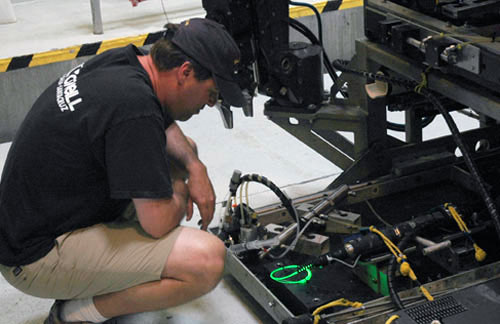 Research technician Peter Walz inspects the coil of tubing on the liquid-core waveguide prior to sending it down to 2,000 meters (6,500 feet) for testing. It looked perfect on deck, but when it got to depth, it wasn’t quite as good as hoped for. 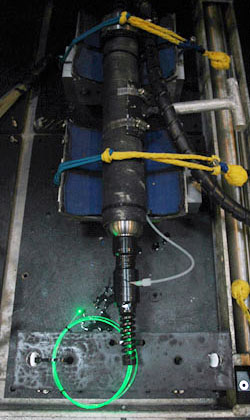 Close-up of the liquid-core waveguide.

Before leaving the seafloor, a couple of sediment cores were collected as a trial run for several members of the science group who hope to collect more such samples later in the expedition. The sediment in the particular area where the remotely operated vehicle (ROV) had landed turned out to be a shallow layer of mud on top of hard volcanic rock. This may bode well for our colleagues who study volcanic processes, but this group needs to find deep mud for inserting the laser probe. Tonight we are sailing north a bit, aiming for a better research site for tomorrow, again close to where the marvelous new maps are being created.