By late afternoon yesterday, we’d made our way about 250 kilometers (155 miles) south from the Delfin Basin, into the Guaymas Basin to the east of the Baja California town of Santa Rosalia. The wind was howling again, and it looked like our dive site near the Baja coast was going to be too rough to launch the ROV in the 25+ knot winds and rising seas. In hopes of hiding from the wind, we headed for Isla Tortuga, a small island toward the middle of the Gulf, about 30 kilometers (18 miles) further southwest. We rounded the island and eased into the leeward side, where the wind was still blowing hard, but the seas were low enough to launch the benthic respirometer system (BRS) and the ROV. We got everything into the water by about 5:00 p.m. 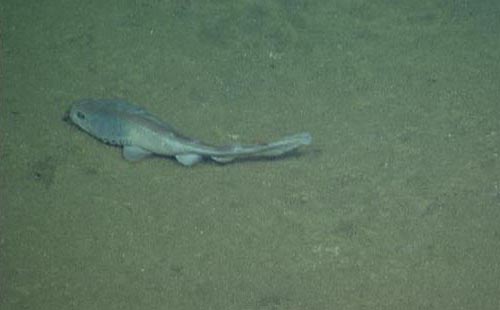 Small sharks swam just above the seafloor; there seemed to be quite a few juveniles among them.

On the bottom, we were delighted to see conditions much clearer and calmer than we’d experienced over the past couple days in the northern basins. It is so much easier and a lot more fun to view the seabed through clear water. The ROV dove to 760 meters (2,500 feet), where the BRS had settled on the bottom, only about 130 meters (425 feet) from the ship. The water was cold (~5 degrees centigrade) and oxygen was very, very low (two micromolar, or less than one percent of surface levels and 10 times lower than the northern basins at the same depth). The bottom was a very soft mud, but had lots of animals. There were various fishes—eelpouts, hagfish, hake, small sharks, and many batfish—a few days ago we’d seen these and tentatively called them monkfish. Both groups are closely related, but we are fairly certain this is a batfish (possibly Dibranchus spongiosa).

During our last visit here we tried to capture a couple of batfish and put them into respiration chambers, but both fish escaped before we could close the chamber lid. The ROV pilots were ready for the chase this time. Seven batfish were caught and placed in seven respiration chambers, with measurements that continued to this afternoon (March 9). We were delighted. 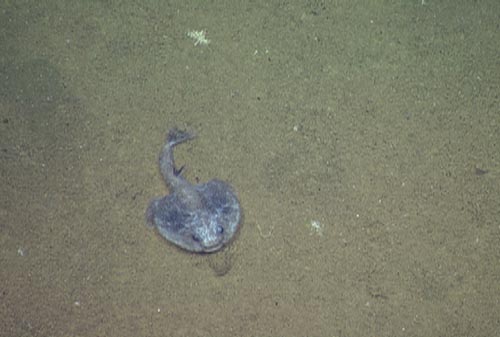 These charismatic batfish were abundant on the deep, muddy seafloor near Isla Tortuga. They move much faster than you’d think.

Hiding behind Isla Tortuga turned out to be a very good idea. The wind hasn’t stopped, gusting to 30+ knots since we arrived here yesterday afternoon. Even still, the lee of the island was smooth enough to allow dive operations, so in addition to the dive we were able to make yesterday afternoon, we could dive in this spot again today.

The ROV was launched this morning about 2.5 kilometers (1.5 miles) from the south edge of Isla Tortuga and reached the bottom at a depth of 1,200 meters (4,000 feet). The core of the oxygen minimum zone (OMZ) is centered near 600 meters (2,000 feet), and below 800 meters (2,600 feet), oxygen levels in the water rise—at 1,200 meters, there was about six micromoles oxygen per liter seawater, about three times more than at 760 meters where the respiration system is located. The higher oxygen may be the reason for the higher densities of animals living just below the OMZ. Even though it is still low, a little more oxygen may make it habitable. Brittle stars were highly abundant at a depth of 1,200 meters, but were also patchy. As the ROV transited up the steep slope, the brittle stars decreased in abundance. Other species were fairly common, including various patches of sea stars, numerous fish, snails, and anemones. For the most part, it was a mud-covered bottom, but we encountered a steep rocky cliff of pillow lava—evidence of an ancient eruption—beautiful pillow-like lava that now has sponges, corals, and other animals growing all over it. 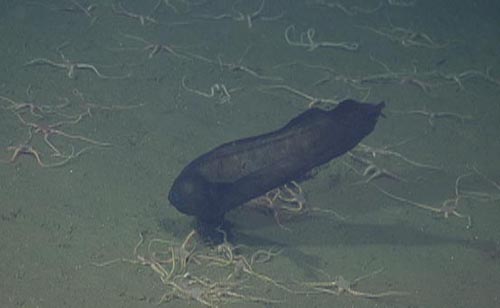 While a large number of fish like this ophidid were observed, brittlestars were very abundant where the oxygen level of the water was relatively high.

The ROV ascended by 2:00 p.m. and at 3:30 p.m. we released the respiration system from the bottom using the acoustic release. After 25 minutes it was on the surface and we are about to bring it back aboard. Once we have it on deck, we’ll download the data collected since yesterday, then analyze the oxygen consumption rates of each animal and learn something about how these fish can make a living in this incredibly hypoxic (low oxygen) habitat.

By the time we are downloading the data, the Western Flyer will turn towards the south and begin the 24 hour steam to La Paz and the end of the third leg of the 2012 Gulf of California expedition.