Contrary to the forecast, the wind picked up to nearly 40 knots overnight and the captain decided to move several miles toward shore to find calmer waters. We all slept better because of it. By sunrise the wind was down near 25 knots, and we launched the ROV Doc Ricketts at around 7:00 a.m. As it descended toward the bottom 820 meters (2,700 feet) beneath the surface, we watched the video screens showing thicker and thicker marine snow. After the mud storm yesterday only 27 kilometers (17 miles) away, we were really hoping for workable conditions on the bottom. The tide was approaching a low at 8:30 a.m., and we expected that the tidal currents would be lowest during slack tide.

On the bottom, it was murky with suspended sediment and a moderate current. But it could have been worse—yesterday the current was so strong that the ROV couldn’t land on the bottom. Through the suspended sediment, we saw a mud-covered plain, with very few animals; some small octopuses, sea squirts, and a few animals known as heart urchins. While it looked very barren compared to other habitats we see, we could tell that there are actually many of these urchins living just under the sediment—their primary habitat. We began slurping up urchins visible on the surface with a suction sampler, then dropping them one by one into seven of the respiration chambers in the benthic respirometer system (BRS), closing the doors after we’d finished. We left one chamber without an urchin so that we could measure the “extra” respiration caused by the microbial community in the water and any sediment that was present in the chamber. 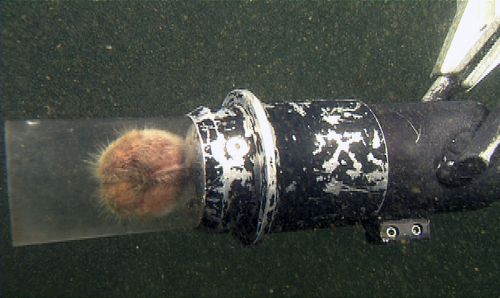 A heart urchin inside the suction sampler. The majority of these animals remain burrowed under the sediment and out of sight.

The most interesting features on this bottom were the many octopuses we observed. As soon as we arrived at the respirometer system, there was one sitting on the frame, appearing to have claimed this new “rock” for itself. It gave what seemed to us to be a mean stare, but it quickly backed down and hid under the frame as the five-ton ROV with huge lights approached. This octopus was a treat to see, but during the dive we found them to be quite abundant on the mostly barren seabed. We saw them nestled under the occasional sea squirt, partially buried in the sediment, and swimming or crawling over the seabed. Such curious beasts.

We’d timed the tide well, and were able to work pretty effectively, but only for a while. As time passed and the tidal phase moved into full flood, the currents picked up and we couldn’t work on the bottom. We decided to fly up to about 20 meters (65 feet) above the bottom and let the ROV and the ship drift down-current. After about 30 minutes, the pilots flew the ROV back down to the seabed and we struggled to run a video transect, zooming in on the seabed and recording video close-up as they piloted the ROV over about 300 meters (1,000 feet) of the seabed. This will allow us to measure the abundance of various animals living there. Here and there we stopped to collect some animals (urchins, tiny fish, sea squirts) and sediment core samples we’ll analyze this evening. 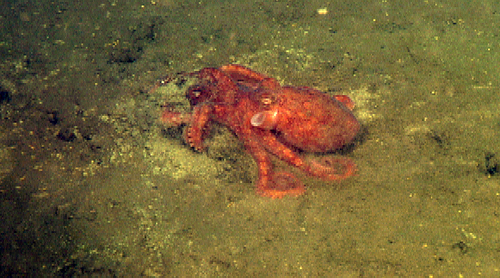 The seafloor looked mostly barren in the Delfin Basin except when we came along some octopuses. There are two in this picture; one is nearly 100 percent buried in the front and it was interesting to watch them interact.

As we crossed over the seabed, we hoped to stumble upon a hydrothermal vent or methane seep—features associated with tectonic motion. This dive, like nearly all others on this cruise, was located directly over the seam between tectonic plates that is tearing Baja California from mainland Mexico. We’d have recognized the vent or seep communities immediately by the typically high densities of large clams, tubeworms, and other animals—far more abundant than in any other deep-sea habitat. Many of these animals have symbiotic relationships with “chemosynthetic bacteria”—bacteria that live in their tissues.

Many clams, mussels, worms, and other animals can use chemical energy rather than sunlight to grow. We all know that plants use photosynthesis—carbon dioxide + water + energy (sunlight) are used to create sugars and other organic compounds, with oxygen as a waste product. Chemosynthesis is nearly identical, but uses chemical energy instead of sunlight. Various chemical compounds can fuel chemosynthesis, but sulfide and methane appear to be the most common for the chemosynthetic microbes at vent and seep communities. Had we found these ecosystems, we could have measured sulfide concentrations in the water near the vent and seep sites using the ISUS sulfide sensor developed by Ken Johnson, a marine chemist on this leg of the cruise. The sulfide sensor was operating nearly continuously during the cruise, but never detected sulfide during our dives. The ISUS will be used on later legs of the Gulf of California expedition, targeting known or likely locations of vent and seep systems.

The ROV was on the surface by 5:00 p.m., just in time for another big dinner. We ate and then began processing all of the cores and other samples. Considering the conditions, this was a great day. We stayed on station until 8:00 p.m., when we released the respirometer system from the bottom using the acoustic release, and by 8:30 it was on deck and the captain turned the ship south, heading back toward the Guaymas Basin near the mid-point of the Sea of Cortez. We’ll have one final dive there tomorrow before we head to La Paz on Friday.