Day 6: Sampling with the stars

Today started off with a flurry of excitement as the benthic respirometer system (BRS) we deployed yesterday was released from the seafloor shortly after 6:00 a.m. After a quick trip to the surface, it was tracked down and swiftly craned back onto the ship by the crew and pilots. By around 7:00 a.m. we had collected water samples from each of the eight chambers, seven of which contained sea stars loaded into the system yesterday during the remotely operated vehicle (ROV)Doc Ricketts dive. The chamber water samples were analyzed for pH and dissolved inorganic carbon (DIC) to determine how accurately the automated system had adjusted the chamber water chemistry to the levels we’d programmed. 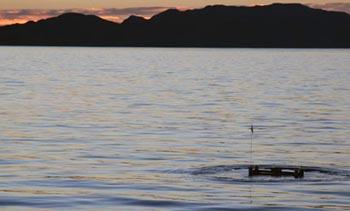 Early this morning we recalled the benthic respirometer system (BRS), which had been doing its work on the seafloor at 1,575 meters (5,040 feet) overnight. We sent a remote signal to it, which told it to float to the surface where we retrieved it. 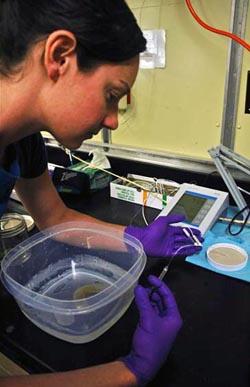 Josi Taylor works in the ship’s lab to test the internal chemistry of animals following treatment with variable CO2 levels in the BRS.

As soon as the deck operations were complete, we began our transit north to our next site in the south Delfin Basin. Shortly after beginning our transit, word from the deck came that there were dolphins nearby. Were there ever! The R/V Western Flyer cruised right by a pod of probably a hundred Pacific white sided dolphins, all eagerly wrangling (or playing with?) a big “bait ball”—a gigantic school of small fish that attracts bigger fish, dolphins, and seabirds. It was quite a chaotic scene! 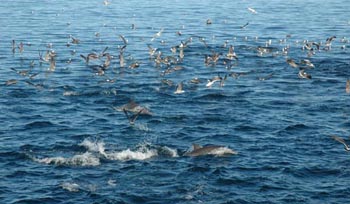 Hundreds of birds arrived to feed when a very large pod of leaping dolphins surrounded bait fish just under the surface of the water this morning.

Once we arrived on site, the BRS was once again carefully craned over the side, with the ROVDoc Ricketts following shortly behind. Unfortunately, it quickly became apparent that the “storms beneath” that we’d experienced yesterday were a walk in the park compared to the currents in this narrow basin. The ROV pilots tried every trick in the book to hold their course, let alone make progress in the direction of the BRS on the seafloor. Even sitting the ROV on the bottom was futile; the current just dragged us backwards through the mud. We did not see many animals living in this current-swept channel!

Finally we conceded to a new plan: bring the ROV and the BRS back up, and move north to an adjacent site with a wider basin. Basically, we’re moving from the fast-moving stem of the funnel to the wider, slower moving top portion of the funnel. Hopefully this move, combined with a slack tide, will help us get the BRS loaded up tomorrow morning, and give the pilots a break from this strong underwater treadmill they’ve been fighting! 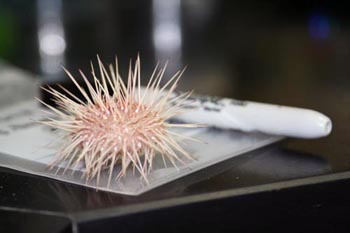 Toward the end of the dive we found the sea urchin, Strongylocentotus fragilis. This species is also found in Monterey Bay. This specimen is lighter in color and appears to have a stronger skeleton than the ones up north, likely due to differences in diet and water chemistry. 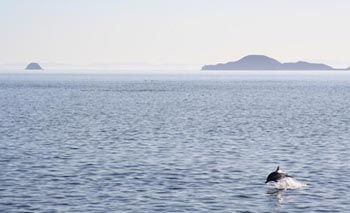