Day 5: The storm beneath

The seas slowly diminished through the night and we all had a decent night’s sleep that wasn’t like trying to sleep on a city bus running down a winding, bumpy road. We arose to calm, glassy seas in the Salsipuedes Basin and a beautiful sunrise over the islands to the east. El Norte had blown itself out, and we looked forward to light winds and calm seas. What we didn’t realize was that the rough, stormy conditions were now beneath us. 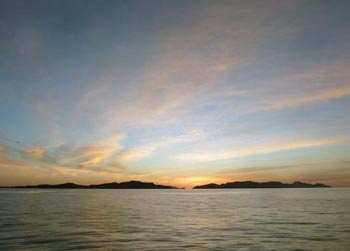 We were all quite thankful to awaken at Salispuedes where the ocean was very calm and a wonderful sunrise greeted us.

The crew deployed the benthic respirometer system (BRS) over the stern and it sank at its normal rate of 30 meters (100 feet) per minute toward the bottom of the Salsipuedes Basin, 1,600 meters (one mile) down. We followed it immediately with the remotely operated vehicle (ROV), intending to place an animal in each of the eight respiration chambers.

Deep waters in the Salsipuedes Basin and the other nearby basins in the northwestern Gulf of California are warm and oxygen-rich relative to the basins in the south. Whereas the temperature in the Guaymas Basin to the south was 5°C (37°F), down in Salsipuedes it is 11°C (51°F). Oxygen, near zero (one micromole per liter) in Guaymas Basin, was 44 at the same depth here—surface water usually contains around 300 micromoles of oxygen per liter.

The ROV Doc Ricketts descended toward the bottom and entered a thick “snowstorm” of suspended particles of detritus, sediment, and other organic debris that sinks slowly toward the seabed (marine snow). As the ROV neared the bottom, the snowstorm became thicker and thicker until it looked like we were driving through a blizzard. In the last couple of meters above the bottom, it was so thick we could barely see and was combined with suspended sediment. The bottom waters in the basin were like a thick brown soup. The pilots landed “blind” on the seabed, which we couldn’t see through the brown cloud.

With surface conditions so nice, we were dismayed when we reached the seafloor and couldn’t see anything but sediment-laden water.

Why such turbid water? The very fast tidal currents that run through Salsipuedes Channel and Basin are well known, and they zip along the bottom, churning sediment up into the water column. These benthic storms are caused more by tides than winds. Either way, it presented a dilemma: it was too turbid to capture animals and place them in the respiration chambers.

We decided to pick the respirometer system up with the ROV and carry it to a shallower area toward the side of the basin, about 500 meters (one-third of a mile) to the east. We slowly made our way, moving about 50 meters shallower, which proved just enough to get us out of the brown soup and into waters clear enough to see at least some of the bottom next to the ROV.

Unlike the bottom in the Guaymas Basin—where oxygen was low, but the water was relatively clear—here in the Salsipuedes deep, there were few animals on the seabed. It must be a tough place to make a living—somewhat like living your life in a continuous dust storm. Nevertheless, there were quite a few sea stars on the otherwise mostly barren seabed, so we chose to load the chambers with one each. As we began, the tidal currents kicked into high gear and the pilots could barely hold the ROV in position to complete loading the BRS. But they are highly skilled and dedicated, and somehow figured a way to make it work. After an hour or so, they’d completed the job in the gloom of the deep-sea storm. 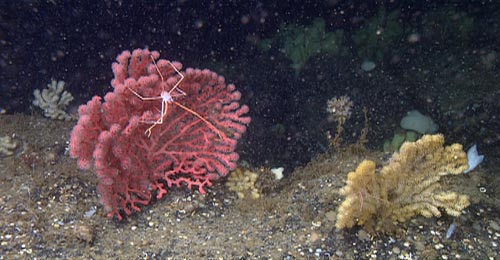 The underwater visibility got much better as we moved upslope onto rocky habitat. These deep-sea corals dotted the steep rock outcrops we encountered.

After that we started a video transect up the slope to observe and count animals on the seabed. The shallower we progressed up the slope, the clearer the water became. Six and one-half hours later, we had moved most of the way up the slope, which turned out to be a steep cliff about 800 kilometers (half mile) high. It was spectacular, with sheer drop-offs and rubble fields, and was covered with sponges, clams, deep-sea corals, and various other animals. Lots of filter feeders seem to thrive here where the rapid currents provide high amounts of food that simply drifts by, waiting to be captured, but it is not so turbid as the bottom of the basin.

The ROV is now on the way up, and we’ll have a long evening processing the animals and sediment cores we collected. We’ll sieve the mud to separate the “macrofauna”—worms, small shrimps, and other crustaceans, snails, and any little animals that live in and on the mud—from the sediment. Time to put on a lab coat and get muddy! 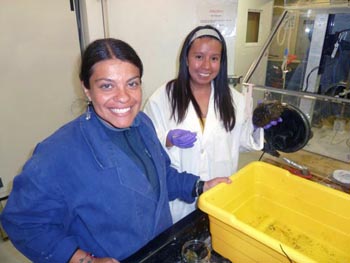