El Norte blew through the night, but by morning was showing signs of backing off. Thirty knots overnight dropped to 25 by mid-morning. Just before lunch we were able to resume operations and launched the ROV Doc Ricketts for another dive in Guaymas Basin to study the seabed. We dove to 970 meters (3,200 feet) and observed the seabed for a while, identifying the local fauna, looking for odd animals rarely seen in California waters.

These clams (left), tunicates (right), and brittle stars (underneath) were very abundant on the seafloor amongst the rocks at over 900 meters (2,900 feet) depth.

We performed benthic ‘video transects,’ where we zoom in on the seabed so that the width of the video images is about one meter wide. We use a pair of parallel red lasers to help with this. The lasers shine two red dots on the seabed that are 29 centimeters apart and provide us with a sort of scale to measure the size of objects we observe. We then fly slowly over the seabed in one direction for 500 or more meters. Later, video analysts at MBARI will identify and count all of the animals and seabed characteristics observed along the transect, providing a quantitative measure of the abundance and density of all of the organisms we can identify. 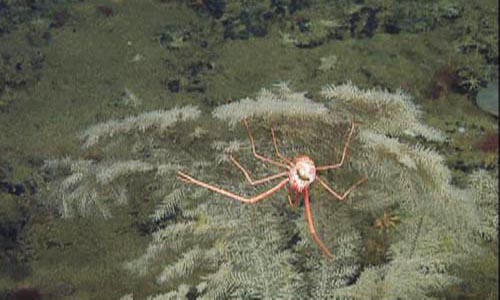 We saw amazing fields of deep-sea corals, with the very long-armed galatheid crabs perched on them.

Late in the day we released the benthic respirometer system (BRS) from the seabed. It rose to the surface at a speed near 35 meters per minute, and arrived in just over 30 minutes. We eased the ship close to the BRS bobbing at the surface, grappled it with a line, and carefully lifted it aboard using the A-frame and winch on the stern of the ship. We’ll download the data and analyze the rates of oxygen consumption for the sea cucumbers (Pannychia sp.) placed in the chambers two days ago.

We are now headed for the Salsipuedes Basin, a location about 120 kilometers (75 miles) north. The Salsipuedes Basin is known for its difficult and treacherous currents. We plan to deploy the BRS in the basin tomorrow morning, then dive the ROV Doc Ricketts to load the BRS with animals and explore the seabed. Hopefully we’ll run into unknown hydrothermal vent or seep locations. They have been discovered in several locations along the Gulf of California, and are somewhat expected since the gulf is actively spreading, slowly opening the distance between Baja California and mainland Mexico.