The second day of our leg began just as the sun snuck above the eastern horizon. We prepared the benthic respirometer system (BRS) for deployment on the back deck. This robotic system is designed to measure the rates of oxygen consumption of seafloor animals placed in each of eight glass chambers. Each chamber has an oxygen sensor, stirring pump, flush pump, and an injection pump. The BRS is deployed over the side of the ship, released from its deployment line, and sinks alone to the seafloor. 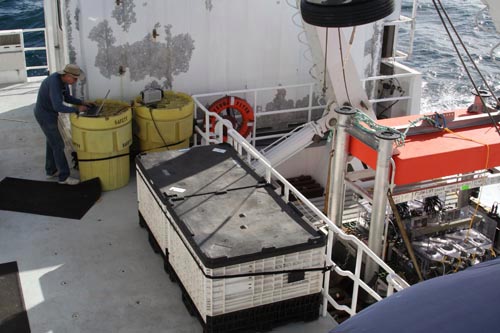 Engineer Bob Herlien programs the benthic respirometer system (at right) to measure the rates of oxygen consumption of seafloor animals placed in each of eight glass chambers. Each chamber has an oxygen sensor, stirring pump, flush pump, and an injection pump. 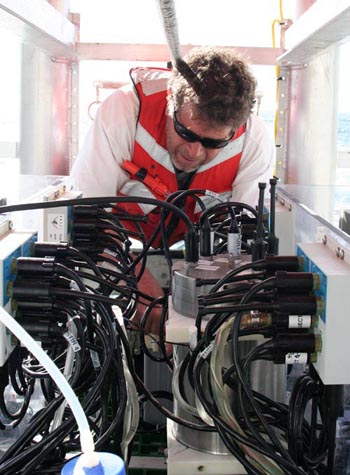 We launched the BRS in the Guaymas Basin, then tracked its descent using a navigation beacon attached to its frame. The remotely operated vehicle (ROV) Doc Ricketts was then launched and followed the BRS to the bottom. The BRS landed at a depth of 979 meters (3,132 feet) on a moderately sloping undersea hillside. 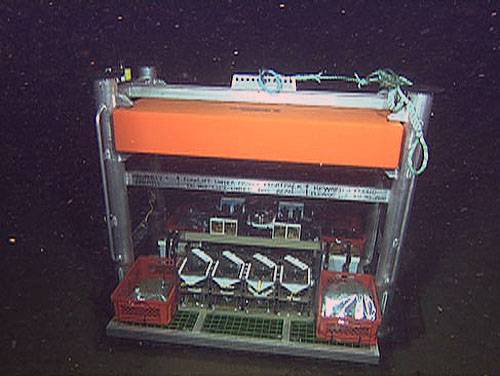 Having launched the benthic respirometer system over the side of the ship, we were happy to see it waiting for us when we arrived on the seafloor with the Doc Ricketts.

The mud bottom had high densities of animals, dominated by a sea cucumber called Pannychia, lots of small anemones, shrimps, squat lobsters, sponges, various fish species, and lots of burrows. This depth is slightly below the core of the oxygen minimum zone stretching between 400-800 meters (1,280-2,560 feet) where oxygen levels begin to rise. This higher oxygen is an important factor allowing life to thrive at this depth. 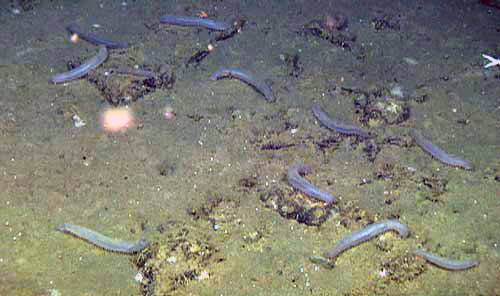 Sea cucumbers known as Pannychia moselyi were very abundant on the seafloor at 979 meters (3,132 feet).

The ROV pilots used a suction sampler—a sort of vacuum cleaner hose—to gently slurp up individual animals to place into each respiration chamber. As we were scanning the seafloor for likely candidates to fill the chambers, a large deep-sea crab called Paralomis lumbered into the scene. We decided to try and get it into the chamber. We held the suction head next to its carapace—the upper section of its shell—and attached it like a suction cup. The hard part is getting this animal into the small chamber and closing the lid before it scrambles out. It fell into the chamber and the pilots hustled to get the lid closed, but the big crab was just too fast. It escaped, and then wandered away. 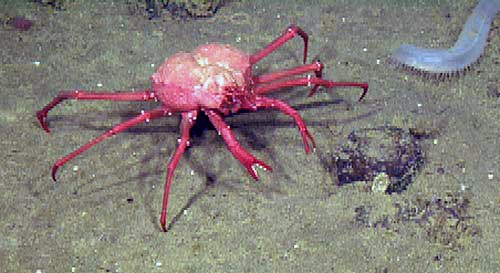 This Paralomis crab was easily collected, but fast enough to escape later.

We flew the ROV away several meters to find another crab. A smaller Paralomis was nestled next to a rock, but the pilots were able to slurp it up, and flew back to the BRS to try again. It fell into the chamber, but once again, scrambled out before we could close the lid. Score it Paralomis: 2, scientists: 0. We gave up and decided to try for other species.

We saw a pair of juvenile batfish lying on the seafloor and thought we’d see if our luck was better with this slow-moving fish. We were able to try again with each of the pair. We easily suctioned them onto the end of the slurp sampler, but once again failed to get them into the chambers and the lids closed. Game over – score, Batfish: 2, Scientists: 0. I thought we would eventually win in this match if we had lots of time, but the winds were increasing rapidly.

The final target was the sea cucumber Pannychia—these animals are slower than a turtle and we knew we could get the eight chambers loaded up with them quickly. With the increasing winds came larger seas, and we were almost out of dive time for the day. In about 30 minutes we loaded seven of the eight chambers with Pannychia and closed all the lids. Chamber 1 was left empty to measure the respiration rate of the microbial community in the water or any sediment that wafted into the chamber while it was open. We can subtract this value from any rates we measure in the other chambers.

The BRS will automatically measure how much oxygen is consumed in each chamber over a three-hour period. After three hours, a flushing pump will turn on, flushing the water from the chamber to renew it with fresh seawater so that the animals don’t suffocate. These cycles will repeat five times over 15 hours, to determine the ‘baseline’ rates of respiration for each animal. After that, we will inject a bit of high-oxygen water, high-CO2 water, or both into each chamber immediately after flushing, to measure how these animals will respond to higher oxygen or higher CO2 levels.

More CO2 causes some ‘ocean acidification,’ a process that is happening throughout the world ocean as our fossil fuel carbon dioxide emissions are absorbed from the atmosphere. WillPannychia’s respiration rates be affected by changes in oxygen or CO2? Hopefully, we’ll have the answer soon.

Although the day started out calm, during our ROV dive, the winds kicked up to nearly 40 knots, forcing us to abort the dive very early. We were able to collect 10 sediment cores at the end of the dive, just prior to heading up. The BRS will stay down until at least tomorrow morning. Hopefully, we’ll have better weather. Stay tuned. 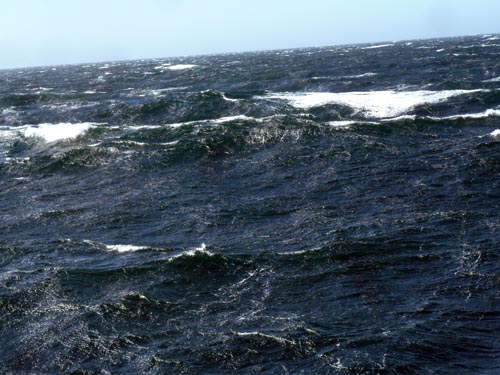 It was amazingly calm this morning, but 40-knot winds and large waves forced us to recover the remotely operated vehicle early.