Eight MBARI scientists and two Mexican collaborators arrived in La Paz over the past few days to prepare for the third leg of the Gulf of California cruise on the R/V Western Flyer. Under mostly blue skies and warm weather, we loaded our gear onto the ship docked in Pichilingue, about 16 kilometers (10 miles) north of La Paz. The crew quickly craned our gear aboard, and we organized the labs and began the final preparation for the cruise. The lines tethering the ship to the dock were tossed at 8:00 this morning and we steamed out of Pichilingue, heading north towards the upper Gulf of California. 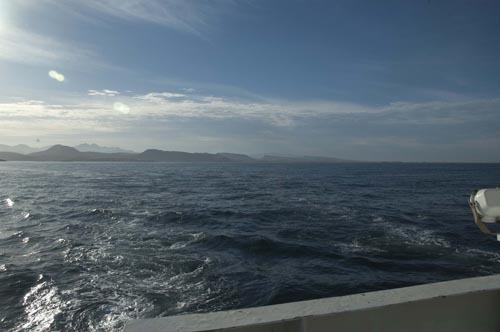 The R/V Western Flyer heading out of La Paz this morning.

About one hour out of port, we stopped to perform a test dive with the remotely operated vehicle (ROV) Doc Ricketts, which went very smoothly. There have been some intermittent problems with ROV lights, and the ROV crew wanted to test their repair of the power system for the lights. The ROV dove to 500 meters (1,600 feet) depth and returned to the surface, with full lights and no failures. 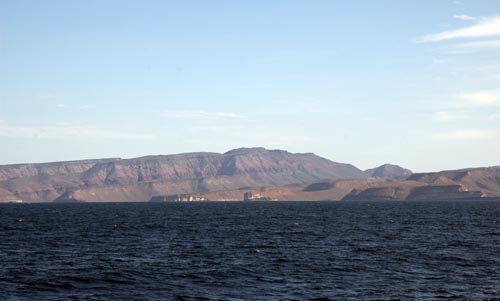 Passing the beautiful island of Espirito Santo. The island supports a large sea lion colony and is a favorite of scuba divers visiting the area.

We are now headed north to the Guaymas Basin, roughly 380 kilometers (240 miles) from La Paz. Animal communities on the seabed near 1,000 meters (3,280 feet) in the cold, hypoxic (low oxygen) waters of this basin will be our first study site. The ship should arrive around 10:00 a.m. tomorrow (March 2) and we will deploy the benthic respirometer system (BRS) and the ROV full of collecting gear such as a suction sampler and sediment cores, and a sulfide sensor Ken Johnson will use to measure sulfide in seawater. Sulfide is common near hydrothermal vents and methane seeps. We hope to run into these amazing habitats during some of our dives. Stay tuned! 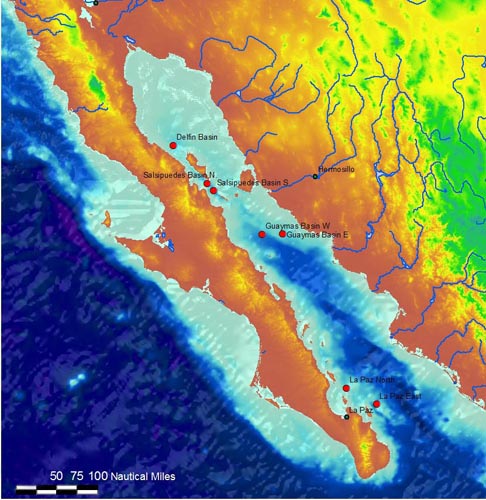 Our first exploration will be in the Guaymas Basin, then we will head far to the north of La Paz to the Delfin and Salsipuedes Basins.