Day 6: The good kind of blues (the sea and the sky)

Day 6 started early. The first CTD cast was just before 6:30 a.m., under clear blue skies and over deep blue waters. Watching researchers prepare incubations on the starboard deck as the technicians and ship’s crew recovered the CTD, silhouetted by a rising sun skipping and glancing crisp morning rays across the rippled surface of the Pacific, illuminating the Baja coast on the horizon behind them, it becomes pretty clear that these folks made exceptional career choices. 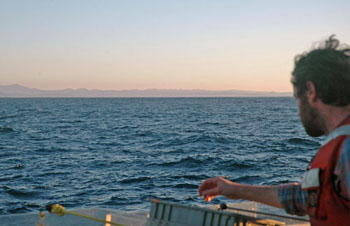 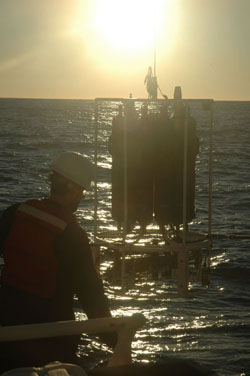 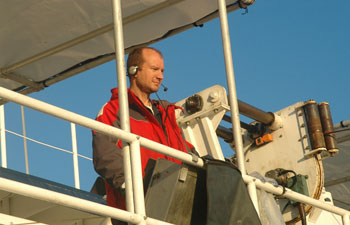 Today and yesterday the timing of our sampling stations has worked out so that we’ve been able to hold two “seminars at sea,” organized by Tim Pennington. Yesterday, Francisco Chavez presented a talk on some of the fundamentals of ocean biogeochemistry. Today, Curt Collins, a physical oceanographer at the Naval Postgraduate School, educated us on the exchange of waters between the Gulf of California and Pacific Ocean. 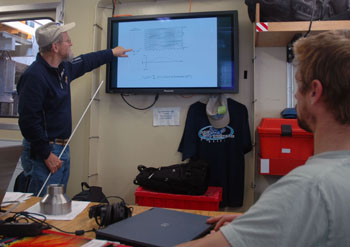 Curt Collins, a physical oceanographer from the Naval Postgraduate School and MBARI board member, presents a talk to the science team about current flows in and out of the Gulf of California

One thing I’ve learned from reading expedition logs from previous MBARI research cruises is that a cruise plan is often a dynamic document. In addition to the various factors such as wind and weather that any journey on the open ocean must take into account, unexpected opportunities that redirect or inform the original research plan sometimes present themselves. Due in part to time constraints, and in part to the intrigue these new sites present, some modifications have been made to our cruise plan.

Soledad Basin—a sort of pool in the outer continental shelf—might be home to some permanently anoxic (zero oxygen) waters. Because the water at the bottom of the basin is below the level of the shelf, the water isn’t mixed by currents. So it’s possible that low- or zero-oxygen water is “stuck” there. Also, because there is no oxygen, and therefore no fauna, the sediments on the in places like Soledad and other anoxic basins and seas provide long records of the past. Though we aren’t equipped for sediment sampling on this leg of the expedition, the opportunity to get a good sample of this water for first-hand examination is too good to pass up, so we’ll stop and make one relatively shallow (around 450 meters) CTD cast before moving on to our next scheduled station. 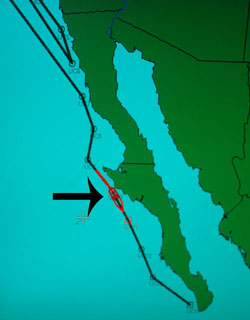 Our location at around 10:00 this morning.

One minor “inconvenience” in this plan, is that it puts the Soledad Basin station and the one immediately following it at 1:30 and 4:00 a.m., respectively. Fortunately, it looks as if chief scientist Francisco Chavez and our steward Patrick Mitts planned for this contingency. Patrick has prepared a monumental turkey dinner that should put enough tryptophan and carbohydrates into everyone’s bloodstream that hitting the bunk early for an earlier-than-early rise shouldn’t be a problem. 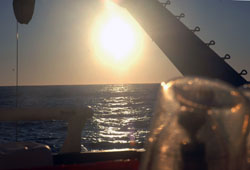 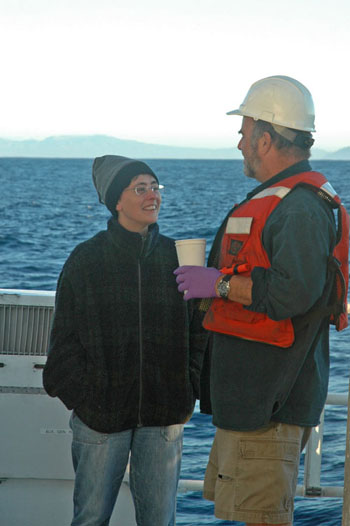 Carmen Castro and Tim Pennington chat on the aft deck while waiting for the CTD to resurface this morning. The coast of Baja California lies on the horizon.