First, I should say that the Day 1, Day 2, Day 3, structure of this logbook format might be a little too rigid for how time flows out here. A “day” at sea on a research cruise is not quite as formal as a period of daylight followed by a period of darkness. Days begin when you wake, and end when you can find a long enough block of time without anything to do that you can sleep. The boat steams continuously and you work whenever you reach the next sampling station.

Case in point, last night’s CTD casts that were scheduled for midnight didn’t end up making it back up onto the deck laden with water from the depths until after 2:00 a.m. The previous night was a late one as well, so the banter around the rosette as we filled our bottles was a little befuddled. I commented on the clarity of the water streaming from the Niskin bottles, noting, not completely disingenuously, that it looked “delicious,” resulting in Tim Pennington joking that this might be my only opportunity to taste 700-meter-deep water. At 3:00 a.m. the “day” finally came to a close as the clouds wrung the last of the rain from their desiccated billows. 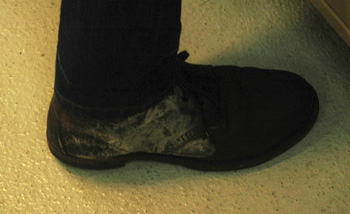 Twenty-three CTD casts worth of salt water have left their briney mark on Jason Smith’s boots.

The next morning, we—those who slept—awoke to the weather we’d been looking forward to: blue skies and a shiny, glassy sea. As if the weather alone weren’t triumphant enough, there were dolphins playing in the waves of the Western Flyer’s bow. I rushed to get the camera, but apparently we’d found the one shy pod of dolphins in the entire Pacific, and they were gone.

Sorry, no dolphins. How about an island?

The ocean is, as Francisco Chavez puts it, like a giant plant; it takes in carbon dioxide (CO2) from the atmosphere and produces oxygen for the atmosphere and surface seas. Like a plant, the ocean also operates as an enormous carbon reservoir—the microscopic organisms on the ocean’s surface take in carbon dioxide gas (inorganic carbon), convert it into organic carbon as it becomes part of their physical structure, and then, when these organisms die or get consumed and excreted, that carbon drifts down to the depths below.

There are a couple more key steps to this “biological pump” mechanism. One is that as the organic material from the surface sinks down into the abyss, it is decaying; this decaying process consumes oxygen. And when most or all of the oxygen in the seawater is consumed, that’s how these oxygen minimum zones I mentioned in yesterday’s log develop. In areas where you have lots of productivity on the sea surface–stable areas where there are lots of nutrients being stirred up from the depths—when that surface life dies, or otherwise begins its final journey into the deep, then all that organic material decaying as it sinks consumes a lot of oxygen, more than can be replenished.

The other thing going on here, and by “other” I mean “crucial,” is that over time, this cycle has created an equilibrium between the sea and the air; and our atmosphere—the one we know and love, the one with just the right mix of oxygen, nitrogen, CO2, etc. that makes our lives possible (and downright pleasant, all things considered)—is a result of this balance. Now, however, in addition to the normal exchange of nutrients between the sea and air, rising CO2 levels in the atmosphere have resulted in the ocean absorbing an additional two billion tons of CO2 annually. 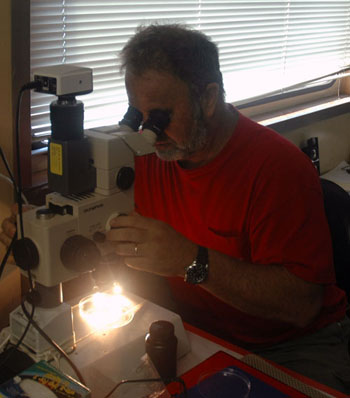 Tim Pennington has a look at the zooplankton Haibin Zhang pulled in on his last plankton tow.

Some of the seawater samples we are taking on this research cruise will be analyzed so that we can see how much carbon is in this part of the ocean. Our collaborator from Spain, Carmen Castro, is measuring the total organic carbon (TOC) content of the water; while Gernot Friederich analyzes the water for its dissolved inorganic carbon (DIC) content—how much CO2 and other forms of dissolved CO2 such as carbonic acid—are in the water. Gernot is able to make his measurements on the boat with a machine that he built just for this purpose. Carmen, however, will take her samples back to Spain before analyzing them, which is why she gets to play with a torch! 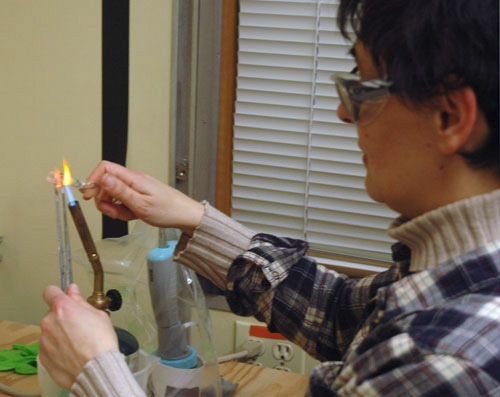 Carmen Castro seals her seawater samples in glass ampules. She’ll take them back to her lab in Spain to analyze them for their organic carbon content.